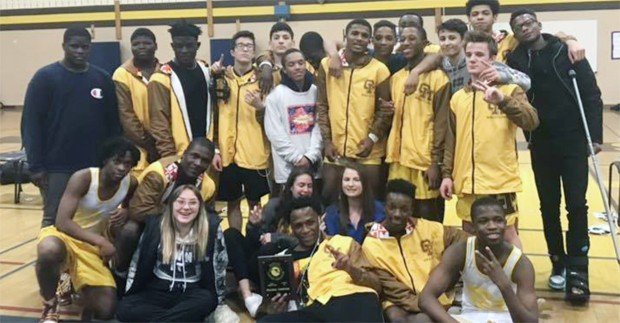 Eagles take out Hereford in final, 39-27

Handling hosting duties for a second consecutive season, the Owings Mills wrestling team felt pretty good about their chances of advancing to the state dual meet tournament. The Eagles (No. 15 in the Maryland state dual meet rankings) owned a 42-30 win over the No. 2 seed and likely finals opponent, Hereford.

The two Baltimore County titans did not disappoint, making quick work of their semifinal opponents, then put on quite a show for the wrestling faithful on hand.

Owings Mills destroyed Crossland 66-18 and Hereford hung a 79-0 beating on Gwynn Park. Then, just as they had done a week ago with the Baltimore County Dual title, the Eagles gave first-year head coach Ryan Mackin, another title, this one, 2A North Region Dual Champions.

“Me being head coach, assistant coach, waterboy is all the same,” said Mackin. “The dynamic of our coaching staff has been the same for a couple of years now, we play very similar roles to what we did played last year. It was more important to me to allow (Shawn) Girch to win it one more time.

“He is very adamant about this being his last year being this involved because his kids are getting older and he’s getting more involved with the Westminster junior league. It’s nice he gets to go out on a win, I feel sometimes he doesn’t get the credit he deserves for the impact he’s had with this particular group of kids. I’m sure he’s not disappearing completely but wants to step back from it being a daily responsibility. It’s nice he has the opportunity to help hang a few more banners for these kids.”

In a fortuitous draw for the Eagles, the match would start at 138. This allowed the home team’s title defense to begin with four state ranked wrestlers in a row.

In an outcome that shocked no one, the Eagles held a 23-0 lead when the dust settled from the rush of those four grapplers.

Wrestling up at 220, Diondre Space (No. 11 at 182) was able to squeeze by Nick Moore, 7-6, to stop the Bulls’ run. They bounced right back though, as Josh Goodwin got a pin at heavyweight to bring Hereford back within five, 26-21.

“Burkhanov stands out the most,” remarked Mackin. “He has had a rough week and had some tough breaks this season in general. The kid was sick all week and it made it tough for him to manage his weight properly. Tonight, he faced a kid who beat him pretty soundly last time, hits a big move and sits on his lead. You could say he was stalling, and I’d have to agree with you, but he’s showing progress with his mental approach and wrestling smart.”

Having a state champion in your pocket at a time like this was a leisure enjoyed by Owings Mills with two matches remaining. Alex Dufour (No. 3 at 113) stepped on the mat at 126lbs and snuffed out Hereford’s title hopes with a 14-4 major-decision of Ethan Stroh. Stroh was fresh off a JV County title he earned last Saturday.

The Eagles’ next order of business is the MPSSAA State Dual Meet Championships this Saturday at North Point High School in Waldorf.

As the four-seed, they draw the unenviable task of facing six-time defending state dual champion, No. 4 Damascus, in the semi-finals. No. 3 Glenelg will battle Parkside on the opposite side of the bracket.

“I’m happy we won, obviously, but really feel like we came out flat and didn’t really have any energy,” Mackin added. “Maybe kids didn’t manage weight right or maybe it was an off day. I’m not sure what it was but if we wrestle this way on Saturday it’s going to be a short weekend.

“I think our inexperience showed a little, maybe with the stakes being what they were our kids were a little hesitant. We don’t have time to hold back Saturday though, that’s for sure. If we wrestle like we are capable, and as a team, we are winning states. I know that sounds dumb to say with powerhouses like Glenelg and Damascus in our division, but I truly believe we are the best team on our best day.”

“I said last year I hope we get one last chance to knock off Damascus, well maybe I should be careful what I wish for, haha. It’s an opportunity we have wanted for an entire year. With them moving up to 3A next season it’ll be our last shot in a while, so we better coming out swinging.”