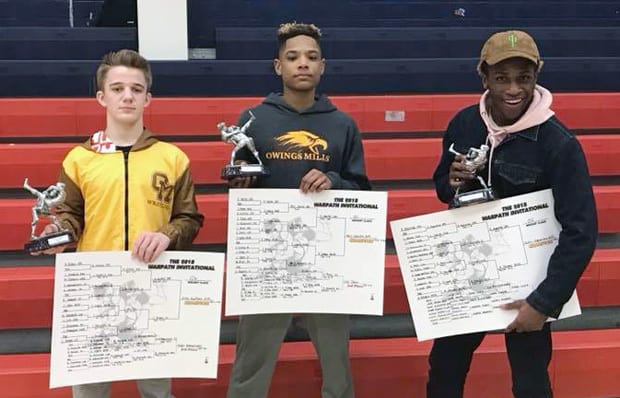 Above: Alex Dufour (106), Phil Smith (120) and Roell Ngounou (152) show off their awards as their individual titles led Owings Mills to the team championship at Franklin’s Warpath Invitational.

Eagles go three-for-three in the finals; Mt. Hebron is second and Franklin third; Blake beats Crawford in a battle of state champs 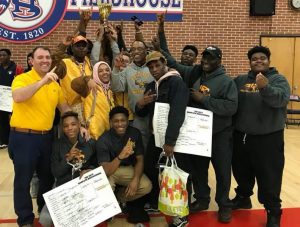 The Owings Mills wrestling team (No. 21 in BillyB’s Wrestling World’s latest rankings) had a strong showing at this weekend’s Warpath Invitational at Franklin High School and walked away with the team title. The Eagles’ three champions and 10 place-winners were the most of any team and earned them 187.5 points to outpace runner-up Mt. Hebron (No. 25) by 17.5 points, 187.5-170.

“This win feels more authentic (than the one four years ago) with all wrestlers that our coaching staff has had a hand in developing,” Owings Mills coach Shawn Girch said. “Going into the weekend we knew we had a chance to win the tournament. At times we looked very good, and then we would let down and lose matches against guys that we have beat, or should beat. While we know there are improvements to be made, I am proud of the overall performance of the team with some of our younger guys like Brian Djemejio stepping up and placing for us. Tyson McDuffy lost his first match of the season and he came back strong to get third and help the team to win the tournament.”

“It felt good winning the tournament, also I felt really good wrestling at my weight,” Dufour added. “I am really proud of the team and our accomplishment. This shows us where we stand to win the county and regional tournament. Our veteran wrestlers stepped up in the consolation rounds and the finals in order to come back and win after losing the lead at one point in the tournament. We still have a lot of work to do and we are still hungry to win more.”

Teammate Phil Smith (120) also picked up his second title, but last year’s crown was earned as a member of Franklin’s squad. The sophomore transferred to Owings Mills this season and has ascended to the No. 1 ranking in the state. Smith pinned No.14 Yahir Lemus (Mt. Hebron) with ten seconds left in the match.

“I️ feel great about winning the tournament,” said Smith. “It was a nice experience. My finals performance was decent. I️ don’t think I️ put in my best effort though. I’m very proud of our team for winning. I️ have a lot of faith in our team to win regions.”

“The finals match was one of the worst that I felt so far this year,” Ngounou continued. “I couldn’t get to my shots, but now I know I need to work on that. I was happy that I still got the job done and as a team we got the win. Now I am looking forward to the next one and helping my team win.”

Mt. Hebron was not able to crown any champions as they went 0-3 in the finals. Settling for silver were Lemus, Pender, and heavyweight Nick Nordhausen.
Placing fourth for the Vikings were Adam Scherr (132), Bryce Kampert (138), and Jamison Hulbert (145). Landing in the fifth spot on the podium were Zach Wilhelm (182) and Jake Witlin (195). Cassy Lopez was sixth at 106.

The host school, Franklin (164 points), kept two championships in house as Robert Garrett (195) and No. 4 Elijah Solomon (220) won their finals bouts. Solomon beat John Carroll’s Adam Berg (No. 8), 8-6, for his first Warpath title. Last season, Solomon did not even make it to the awards stand.

“I feel great,” Solomon said. “Over all my years in this tournament, I never really did much, so it just feels great to be able to see my hard work payoff. I didn’t even know that he was ranked. I just went onto the mat and wrestled my match.”

No. 18 Sparrows Point was fourth with 163 points and crowned two champions, Matt Fouts (113) and Givoni Herring (182). Fouts, who is ranked 12th in the state, picked up a major-decision, 8-0, over Franklin’s Everette to secure his first Warpath championship.

“When I was walking in I knew I was going to have same hard matches,” Fouts remarked. “Throughout the day I felt good and knew I was going to win. When it came down to the championship match I was nervous going out under the light because it was my first time there. The kid was strong and fought hard. But I had more heart to keep going. After the match I was so happy that I won. It showed if you push yourself you can win.”

John Carroll’s fifth place finish was propelled by two champions, No. 10 Luke Strappelli (132) and Druw Van Def Werff (285). Van Der Werff (honorable mention in the state) pulled off a huge upset of No.5 Nordhausen pinning him with one second left on the clock.

“It wasn’t a pretty win, but I’m just glad I pushed myself this tournament,” Strappelli said. “It was fun being in the spotlight again; it reminded me of my old final experiences.”

“I went out there and listened to what my coaches told me to do,” said Van Der Werff. “Without them in my corner there was no way I would have come out on top.”

Linganore had two champions and was involved in the marquee bout of the finals at 126. Joey Bromley won the 160lb title. Defending 4A/3A state champion Earl Blake (No. 2 at 132) dropped down and faced off with No. 1 Travis Crawford (South Carroll), a defending 2A/1A state champion. As with most of Blake’s matches this one was action packed with the Lancer pushing the action. Blake walked away from this battle the victor tallying a major-decision, 13-5.

“It was a great match,” Blake added. “I felt in control and right where I wanted to be. Crawford is a great wrestler. I knew I needed to maintain my level of intensity against him. As for my performance in the match, I felt as if I was able to keep my head and wrestle the way I like to. I stayed on top of him and was able to keep the pressure on him and find my shots. I’m excited for the season to come and I can’t wait for many more challenges.”

Centennial had two champions of their own, No. 12 Jacob Blyukher (138) and No. 1 Jason Kraisser (145). Kraisser stormed through the bracket with three pins, including two in under a minute. In the finals, Kraisser flattened Sparrows Point’s Skyler Minutelli (No. 24) in 39 seconds for his third Warpath crown.

Pennsylvania’s Littlestown had one champion at 170lbs where Carl Harris won a close decision over Linganore’s Michael Bromley (No. 14 at 182), 7-5.