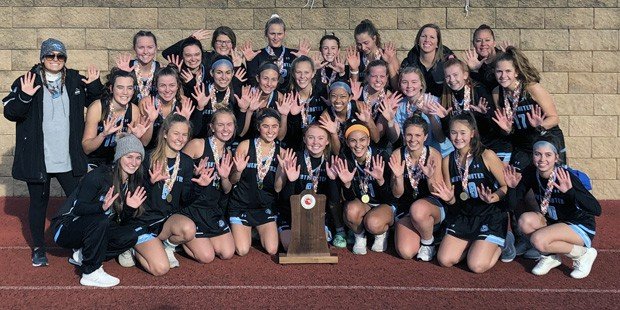 Despite missing on several chances to put the game away in regulation, the Westminster field hockey team finally got the job done in the first 7-v-7 overtime period of Saturday’s 3A state championship game at Washington College, defeating Urbana of Frederick County, 2-1, to secure the school’s 10th field hockey state title and its first since 2014. 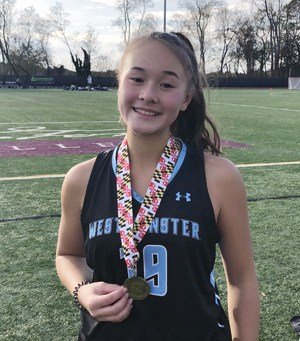 Freshman captain Miranda Woshang scored early in overtime to lift Westminster to the 3A state championship, the 10th in school history.

The game winner came just 2 minutes and 11 seconds into the extra time, as freshman captain Miranda Moshang zipped a diagonal shot to the left of Urbana goalkeeper McKenna Ladson before getting buried under a pile of celebrating teammates.

“The first corner we had I whiffed, so we wanted to try a corner we knew would work,” said Moshang. “We wanted a corner that would draw them over and then come to me. When it did, I saw their girls coming around so I pushed it and I pushed it hard enough to go in.”

Westminster hardly looked like a squad poised to hoist a state championship trophy in the first half. Urbana dominated the possession and had virtually all of the scoring opportunities.

Late in the half, however, the Owls had what was virtually an unprecedented opportunity, a four-man up situation after Urbana was issued four cards in a span of 1 minute and 23 seconds. Still the Owls struggled, getting a card of their own and failing to capitalize with a goal.

“Usually in the first half we come out a little slow,” explained Woshang. “We’re typically a second half team and we knew they are too. So, we wanted to come out strong and we started moving our ball better, communicating more, which is what we needed to work on. Once we got that first goal, we really wanted to win, so we kept pushing it.”

Westminster coach Laurie Nail, a graduate of the school, echoed the words of her star freshman.

“We came out a little slow in the first half but I kept telling them to keep our composure and to keep beating them to the ball,” said Naill. “Eventually you will come up with something and that’s what happened.”

In the end it is Urbana which will be remembered as the team that squandered the opportunities.

The Hawks, despite having the better of the first half action did not score and once they did in the second half, they could not hold back the Owls.

The Hawks big break came with 20:25 to play in the second half when they were awarded a penalty stroke following a foul inside of the arc.

Junior Maggie Goodwin, who came into the contest with a team best 27 goals and 21 assists, took the stroke and lifted a waist high shot inside the left post and past Westminster goalkeeper Megan Watkins.

“After that stroke, I took a timeout and just told them there was so much time left in the game,” said Naill. “They needed to keep their heads up and keep focused on what we were here to do. We just had to keep pushing through and playing our game.”

Instead of gaining more momentum, Urbana seemed to regress under the increased urgency applied by the Owls. As the second half wound down towards the 10 minute mark, Westminster finally made something happen on the offensive end.

Following a kick save by Ladson, Westminster senior Audrey Detrow knocked the ball out of the air to her right. It found its way to the stick of junior Kirby Henneman who whipped a low hard blast into the cage.

Naill expressed pride at being able to bring another championship back to Carroll County.

“Our expectations for the program are always above and beyond. I am just so glad to be a part of it and come back and coach my alma mater and win this today.”