After yielding just two goals to IAAM B Conference opponents all season, including the playoffs, heading into the B Conference championship game against Maryvale on Saturday at the Community College of Baltimore County-Essex, top-seeded Mount de Sales finally became mortal against the Lions.

The Sailors yielded two goals in regulation and then two more in the shootout to fall to the third seeds.

A youth movement that has given Maryvale a big boost this season came through again in in the middle game of a championship triple header.

After getting goals from sophomore forward Kennedy Koehler and freshman midfielder Noel Cumberland in regulation, the Lions eventually took the game into overtime and then forced a shootout after two scoreless overtime periods.

In the shootout, freshman defender Emily Knapp and Koehler had the only two successful penalty kicks to give Maryvale the victory.

“We’re very young and we have good players coming in,” said Maryvale coach Colin Devlin, who won his first title in 12 years at the helm of the Brooklandville school. “We only started two seniors.”

One of the older hands on the Lions roster, junior keeper Emma Lynch, contributed clutch saves on the Sailors’ first two shootout tries.

“I told Emma she needed to leave her feet, stretch her body and get big,” Devlin said.

Lynch said she used a different technique as she faced down the first Mount de Sales shooter.

“I tried to stare them down,” she said with a laugh. “I went the opposite way from where (the Mount de Sales) shooter looked. But I felt like I owed it to my team to make those saves. I had no other option.”

Mount de Sales coach Dave Manser kept leading scorer Grace Gower waiting in the wings in the shootout phase, although she never had a chance to square off against Lynch.

Gower, as usual, made her presence felt early and often for the top seeds.

Her goal, on a 10-yard shot tucked neatly inside the near post in the 23rd minute, gave the Sailors a 1-0 advantage.

Third-seeded Maryvale, which fell to the Sailors in double OT in the regular-season finale, equalized on Koehler’s goal with just over 30 minutes left in the second period and then the Lions stormed ahead on a 30-yard strike by Cumberland three minutes later.

Gower then drew the Sailors even in the 55th minute after senior defender Paige Rivers’ blast caromed off the cross bar and bounced fortuitously toward Gower.

Junior defender Alexis Boyko drew the Sailors even in the 55th minute after senior defender Paige Rivers’ blast caromed off the cross bar and bounced fortuitously toward Boyko.

Earlier, senior defender Emma Spears and freshman midfielder Sophia Dipinio had near misses off the iron as well.

It was just unfortunate for the Sailors that Lynch was in such a stingy mood in the shootout.

“We worked so hard since August 16,” Manser said. “We went unbeaten and gave up just two goals in the conference. (The shootout) is a lot of pressure to put on 15 and 16-year-old girls. It wasn’t pretty and it wasn’t fun, but we went toe-to-toe with (Maryvale) the whole game.”

One of Maryvale’s two senior starters, defender Amanda Commodari, said that she and her teammates did not want to go away empty handed.

“We were here last year (in a 2-1 loss to Roland Park Country School),” she said. “And we were determined to get here again.”

“But we had stayed composed the whole game,” she said.

HIEBER LIFTS THE SAINTS IN OVERTIME 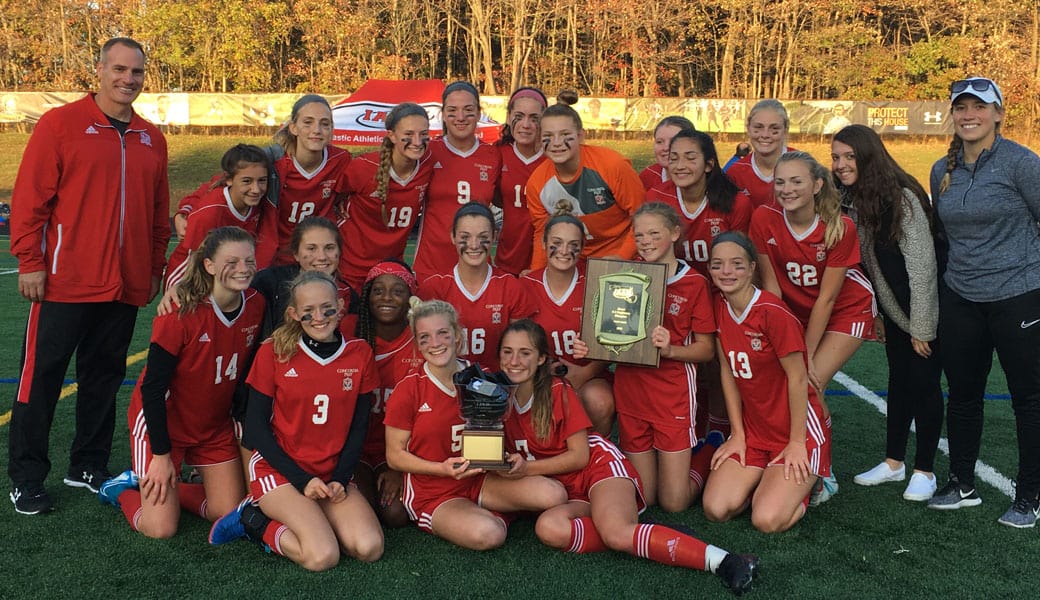 Maddie Hieber’s knack for scoring in key moments — and what’s more important than a golden goal? — was in full display in the IAAM C1 Conference playoffs for top-seeded Concordia Prep this week.

The junior forward not only notched the winning goal in overtime to eliminate St. Timothy’s in a semifinal Thursday, she repeated the feat in the championship against Annapolis Area Christian School on Saturday afternoon at the Community College of Baltimore County-Essex.

After dominating throughout the match, frustration finally ended with just under four minutes remaining in the second overtime for the Saints when Hieber beat onrushing AACS senior keeper Julia Hemmings from close range to claim the program’s first-ever soccer crown.

Sophomore forward Faith Vernarelli placed the ball at Hieber’s feet as she raced toward the goal.

“Maddie has a very strong soccer IQ,” she said. “And with her (small) size, she can just dart around bigger defenders. And she’s really fast.”

Concordia Prep created a pair of corner kicks and several other scoring opportunities in the first half, including a long strike by freshman midfielder Paige Bailey that clanked off the cross bar in the 32nd minute.

She also delivered a tantalizing cross earlier in the period that trickled wide before sophomore midfielder Emily Chamish sent a long shot over the goal.

Junior forward/midfielder Zoe Lemke made the most noise for the Eagles in the opening period, shaking free a couple of times before the Saints’ defense — freshman Gabby Smelcer, junior Kailynn Sullivan and seniors twins Tori and Sam Lassahn — closed in to stop her.

It’s no wonder AACS was unable to muster much offense, given a defense, led by senior Jessica McBride, juniors Taylor Grollman, Lizzy Kosmerl, Lily Hyre and Kyra Hudd and sophomore Te’se Shabazz, packed the back during the entire match.

“We brought our wings back to help (on defense),” AACS Amy Sproul said. “We’ve been having trouble with through balls, so for us to keep our shape was the game plan.

Meanwhile, Concordia Prep ramped up its attack, finishing regulation with a 14-3 shot advantage.

Neither team generated much of anything inn the first overtime, as fatigue seemed to be settling in for both sides.

In the second OT, though, Hieber’s 25th goal of the season was decisive.

“I just love the sport,” she said. “This is a special time.”