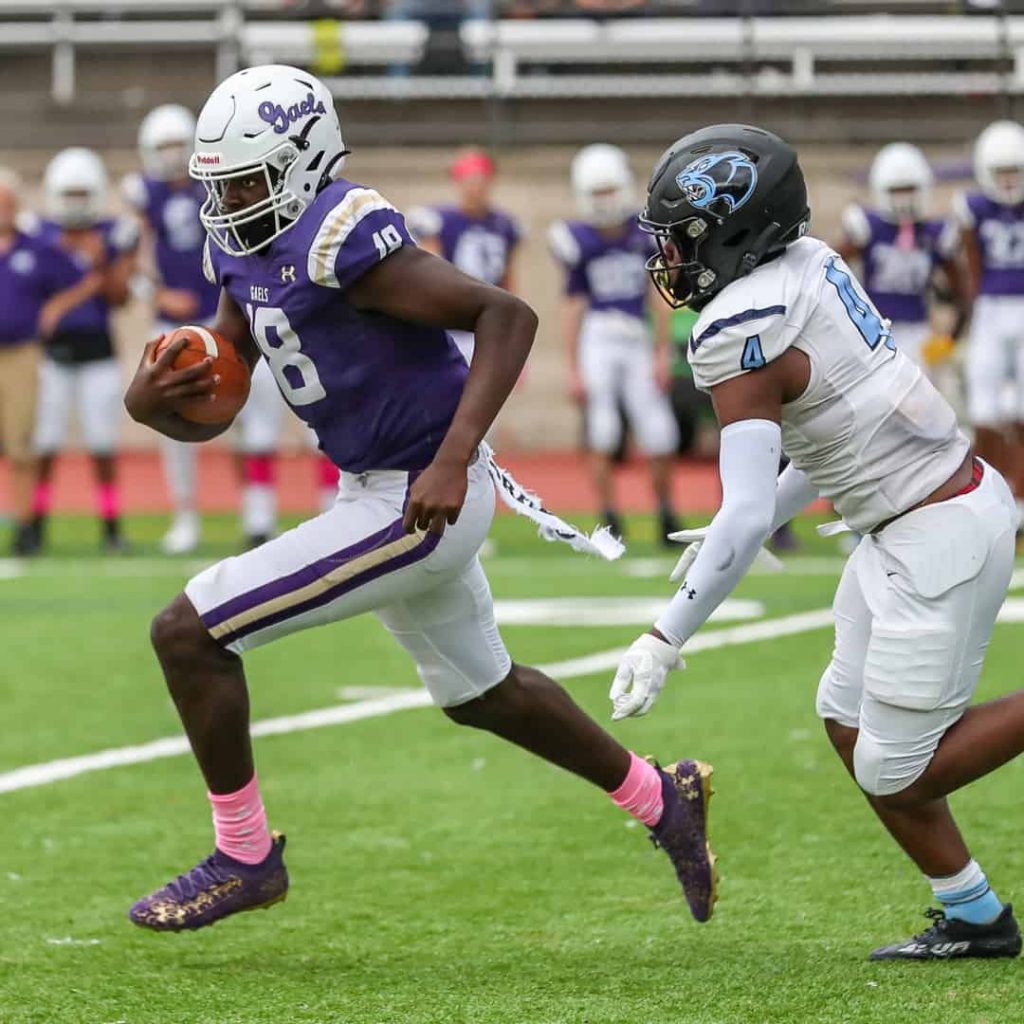 Mount St. Joseph quarterback Deshawn Purdie is chased by St. Vincent Pallotti’s Darrell Jackson during Saturday’s MIAA A Conference football contest. The sophomore Purdie came off the bench and engineered two touchdown drives as the No. 3 Gaels remained undefeated in MIAA A play with a 14-0 victory over the Panthers at John Pleyvak Field in Southwest Baltimore. (photo – SportsMajors)

Kibby said that he and Purdie connected after they tried the same play on the previous snap.

Purdie’s throw was a little long on the initial attempt before his follow-up hit Kibby perfectly in stride to give Mount St. Joe the lead for good.

It was his sixth touchdown catch of the season.

Mount St. Joe coach Dom Damico said that he made the quarterback change because sophomore starter Winston Watkins was a little off his game.

“I felt that we needed a spark,” he said. “I am really proud of Deshawn. He played with a lot of confidence.”

In addition to the TD to Kibby, Purdie completed a 52-yard strike to junior wideout Ronald Goodridge that set up Cox’s 13-yard scamper for the second score with 5:16 left in the third quarter.

With the way the Gaels’ defense was playing, that deficit seemed a lot greater.

Seniors Stephen Schulze, Spencer Toth, Connor Roman, Ashton Knight and Charles Wilson, juniors Gavin Bage and Ferrell Gilliam and sophomore Dwayne Green were smelling a shoutout — and they went after it with a fury.

Pallotti, with Ahmir Lowery directing the offense, moved into plus territory once after the freshman quarterback found junior tight Daniel Wingate for a 31-yard gain and spun a 6-yard completion to senior running back Claton Bulluck-Thomas, Jr. to reach the Gaels’ 46-yard line.

However, Schulze’s tackle-for-loss and junior Julien Moutome’s sack stopped the drive in its tracks.

Pallotti’s defense was almost as good.

“At any level, when you have four good down lineman like they have, they’re tough to go against,” Damico said. “They were all good, but “numbers 9 (senior Cameron Garner) and 11 (Wingate) were very good. They gave us a lot of problems. We couldn’t block (Garner).”

In addition, Damico said that his team was “a little flat” in the beginning of the game.

“It happened to every team, but missing last year (to the pandemic) really hurt us because we’re so young,” he added.

Pallotti coach Tony Ashley said that although the Panthers’ defense came to play, the offense isn’t there yet.

The Panthers (4-4, 0-3 MIAA A) missed an early opportunity to score after junior defensive back Alex Moore picked off Watkins and returned the ball to the Gaels’ 21-yard line midway through the first quarter.

Wilson’s sack and a couple of penalties put an end to the opportunity, though.

“Our offense just can’t keep up with our defense,” he said. “We just couldn’t get a rhythm.”