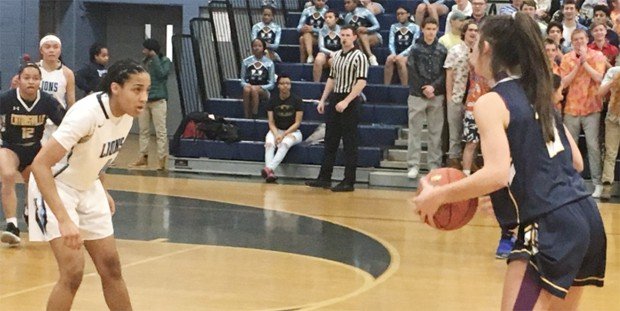 After two straight playoff losses to Catonsville, No. 5 Howard gets 20 points from sophomore guard Lauryn Russell to advance to Class 4A South Region Section I final against sixth-ranked Western

Catonsville coach Mike Mohler knew that his team would have to play hard — and very well — if it was going to eliminate No. 5 Howard from the playoffs for the third year in a row.

Unfortunately for the Comets, only one of those things happened in a girls Class 4A South Region Section I semifinal on Tuesday night.

Mohler’s squad gave a pretty good accounting of itself, effort-wise, yet it was not enough to prevent the host Lions (19-3) from advancing to the sectional final against sixth-ranked Western Doves on Thursday in Baltimore.

Howard’s 52-39 triumph over Catonsville (17-7) was built on its superior speed, an asset that enabled the Lions to take the ball to the glass early and often.

When that ploy didn’t work, they were able to rely on the long-range shooting of sophomore guard Lauryn Russell, who buried three triples and finished with a game-high 20 points. 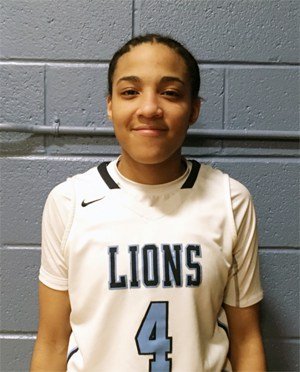 Junior guard Anii Harris contributed 11 points in Howard’s 52-39 victory over Catonsville on Tuesday night in a Class 4A South Region Section I semifinal.

“We were thinking about revenge,” said Howard junior guard Anii Harris, who chipped in with 11 points. “Honestly, we just had a certain fire in us. We were all about ‘attack, attack, attack’ tonight.”

Howard jumped out to a 17-6 lead in the first quarter with Harris, Russell, sophomore guard Emily Durkee and junior guards Marisa Sanchez-Henry and Camille Malagar sharing the scoring load.

Freshman center Gabby Scott added a couple of buckets on assists from Durkee to pierce the Catonsville zone in the second quarter as the Lions boasted a 29-17 advantage at the intermission.

“I thought that the game was within reach at halftime,” Catonsville coach Mike Mohler said. “But they did a great job of disrupting what we like to do, and that’s a big credit to them.”

Even so, the Comets began pecking away at the lead in the third quarter on a sequence started on a steal-and-finish by senior guard Gabby Douglas to reduce the deficit under double digits.

Douglas then swished a 3-pointer followed by a stick-back by senior center Pryncess Lawson to narrow the margin to 33-27.

Suddenly, it was game on, if only for a brief period because Russell struck from beyond the arc before Scott hit a runner on a fast-break to give Howard a 38-27 lead heading into the final period.

“We cut it to six and then they hit that shot,” Mohler said. “That was a dagger. It took a lot out of us.”

The Comets were only able to get within nine points once after that on a Lawson bucket to open the fourth quarter.

The Lions responded immediately on a Harris layup and another Russell bomb to pull away and secure the victory.

Howard coach Scott Robinson said that holding Douglas to nine points was a key to the victory.

“We just tried to take Gabby out of the game as much as we could,” he said, noting that Sanchez-Henry, Durkee and Russell took turns shadowing the Comets’ talented point guard.

Other defensive standouts were Scott, who led the Lions with eight rebounds while Sanchez-Henry yanked down six boards.

Malagar made her presence felt as well by totaling six steals, one more than Russell.

“I know that in my heart of hearts, the best team won tonight,” Mohler said. “Scott’s a great coach, and they put a chaser on Gabby and we didn’t respond very well. We knew coming into the game that we would have to play at a high level to win, and we didn’t do that.”

After two straight playoff losses to Catonsville, No. 5 Howard gets 20 points from sophomore guard Lauryn Russell to advance to Class 4A South Region Section I final against sixth-ranked Western