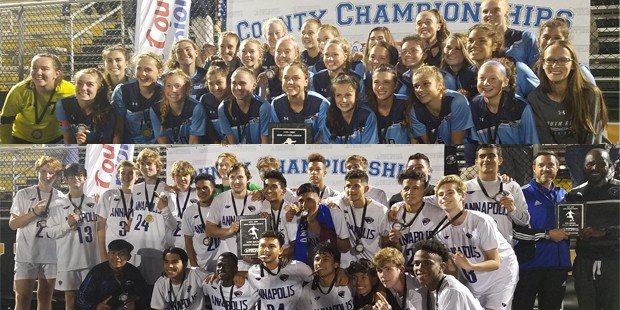 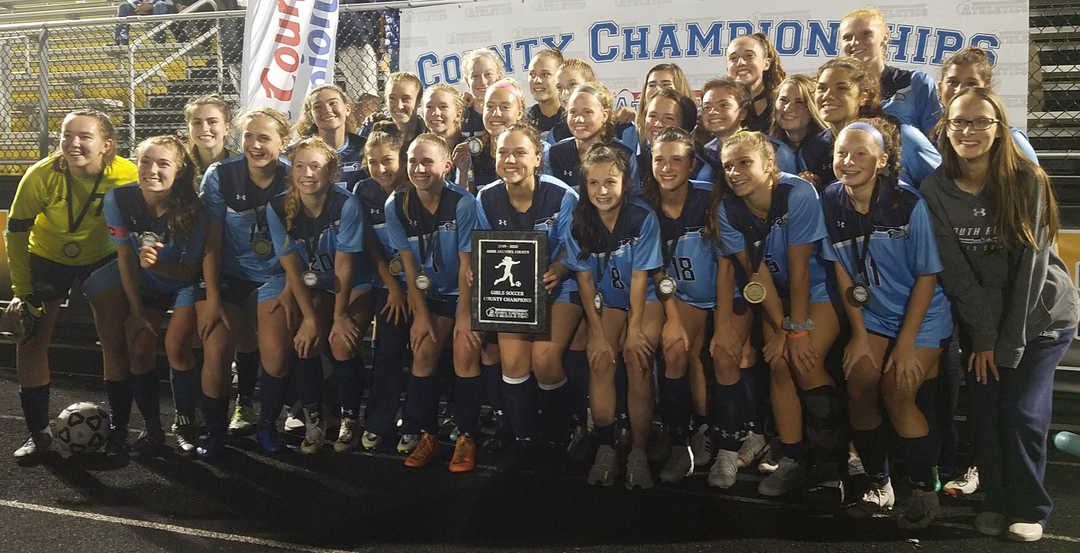 Monday’s Anne Arundel County soccer championships did not lack for excitement. Or time.

No. 4 South River defeated sixth-ranked Severna Park, 1-0, in overtime for the girls’ crown while No. 6 Annapolis boys needed double overtime in the boys’ finale.

It took two games and over 180 minutes for the first goal between Severna Park and South River. For the Seahawks, it was worth the wait.

South River forward Maddie Lenkart authored the goal, giving the Edgewater school the Anne Arundel crown. Junior Madalyn Bonzella lifted the ball from the corner, and with the Falcons struggling to get the ball out of the box, Lenkart wasted little time and fired the ball in the net.

“Coach told us before overtime that someone is going to have to step up by putting it all out there to get these opportunities and we need to finish them,” Lenkart said. “Severna Park is just a great program, we’ve been scoreless against them for two straight games basically so when you get an opportunity like that you have to capitalize on it because they don’t give that up that often.

Both teams knew scoring chances would be limited after a 0-0 double overtime decision during the regular season contest October 3rd. South River (13-0-2) had a chance less than two minutes into the game, but Falcon goalie Katie Byrd denied a shot from Ella Raines from five yards out.

Nothing was easy for either team on the offensively end, Byrd was formidable in cage with nine saves and Julia Cobb had six stops for the Seahawks.

“They always come out fighting,” Severna Park coach Rick Stimpson said. “They gave the effort we were looking for today and on another day with a different bounce here and there it would be a different result. I definitely cannot complain about the work rate and the effort they put in.”

The Seahawks’ stifling defense again posted another clean sheet as they extended their shutout streak to 12 straight games heading into the Class 4A East Region II playoffs. South River has the No. 1 seed and will host the winner of Broadneck/Annapolis. Severna Park will take on Leonardtown.

If both teams win out they meet again for a third time in the regional final.

With just under five minutes remaining in the second overtime, Annapolis generated a corner, in which Arles Alvarado put the ball just inside the box.

With a host of Mustang and Panthers crowded in front of the goal, the ball ricocheted off of a few Panther players before it ended up on the foot of Herrera who finished for the title.

“I didn’t even look at the goal, I just got the ball and fired the shot and it just went in,” Herrera said.

Annapolis handled Meade (8-6-1), 3-0, two weeks ago, but the rematch Monday was contested. Late in the first half, Herrera was able to juke pass a Meade defender on the left side of the field and squeezed the ball past Mustang goalie for 1-0 lead.

“It was so frustrating, their [Meade] defense is good, but once we started to put pressure on the wings we were able to get some good chances,” Herrera said about the Mustang defense.

Six minutes into the second half, Meade senior forward B.J. Balogun delivered a solid cross to Caleb Pritchett, who finished to tie the game. Miller and Annapolis goalie Conner Walter refused to give in as both goalkeepers came up with impressive saves throughout remaining of the second half and both overtime periods.

The Riva Road school extends their winning streak to eight games straight, heading to the Class 4A East Region II playoffs. The second-seeded Panthers will get a chance to avenge their lone loss of the season against Severna Park.

Meade is seeded 4th in the 4A East Region I and will host Glen Burnie on Wednesday.

“This is a rebuilding year, but the guys are peaking at exactly the right time, Meade coach Rob Biondolillo said. “It showed on the field, I like the kind of soccer they played they put a lot of effort into it tonight, but sometimes the ball bounces the wrong way.”