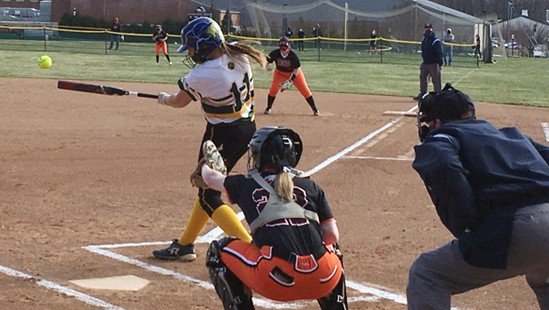 It was not McDonogh School’s most feared hitters — Andrea Ottoman, Mackenzi Preston or Abbigail Nevin — who led the charge for McDonogh’s 13-1 opening day softball victory over Catholic High on Tuesday afternoon in Owings Mills.

Rather, it was the bottom of the order who propelled the Eagles’ 13-run explosion.

Sophomore catcher Abby Blake went 2-for-3 with an RBI and center fielder Caelah Cross stroked three hits to pace IAAM A Conference member McDonogh against their B Conference opponent.

Meanwhile, Ottomano made her presence felt in another way by firing a four-hitter and striking out a dozen Cubs in the sparking performance.

Catholic’s lone run came around after Ottoman booted a grounder and then gave up an RBI single to one of the two freshmen pitchers, Kaylah Morosko (2-for-3), for the Cubs’ only RBI of the game.

The other rookie hurler, Ally McBride, could give the Cubs a potent one-two punch from the circle for years to come throwing to, you guessed it, another ninth grader — catcher Ava Simpson.

That said, with the way Ottomano was mowing down Catholic batters, there was not much the Cubs could do to overcome such a solid assortment of pitches.

And even if the Eagles sluggers didn’t inflict a lot of damage, the entire lineup did a good job of making each at-bat count.

“Their hitters battled and fouled off a lot of good pitches that most hitters couldn’t hit,” Catholic coach Derrick Adams said, praising the McDonogh lineup. “But I think our young pitchers are very talented and have a high softball IQ. They know that they can’t just overpower hitters. They’re both working in throwing five (different types of) pitches — and they have good movement, too.”

Adams said that his fielders weren’t charged with any errors and even managed to cut down two McDonogh runners at third base.

Junior outfielder Olivia Myers threw to shortstop And Kremer, who rifled a throw to third baseman Emily Bonnett to nail one runner while Simpson gunned down another runner with a crisp toss to McBride covering at third.

“We weren’t intimidated,” Adams said. “We’ll learn and grow from this.”