Since Calvert Hall College’s impressive run to the MIAA A Conference championship a couple of months ago, there’s some debate whether the Cardinals were the nation’s best team during the spring. The discussion may be reopened Sunday.

The Cardinals advanced to the semifinals of the National High School Lacrosse Showcase, defeating Pennsylvania’s Haverford Academy, 7-5, in a quarterfinal contest Saturday evening at Blandair Park in Columbia.

The Hall will be the lone area representative in one of the nation’s top events on the summer recruiting circuit as McDonogh School and St. Paul’s School fell in quarterfinal action Saturday. The Crusaders dropped a 7-2 decision to Massachusetts’ Deerfield Academy while the Eagles were unable to hold a second half lead against the Flyers from New York, also known as Chaminade.

The Long Island private school and two-time defending NHSLS champ scored five of the final seven goals to wipe out a 5-3 deficit to McDonogh for an 8-7 victory. The Flyers will play Indiana’s Culver Academy in a semifinal contest, Sunday at 10 a.m. at Blandair.

Culver Academy, which finished No. 1 in the country by Lacrosse.com and split the mythical national championship with Calvert Hall in Inside Lacrosse’s final poll, held off Gonzaga College from the District, 8-7, in a quarterfinal.

The Cardinals built a 5-1 second half advantage before withstanding a Haverford charge. Calvert Hall will play Deerfield in the other semifinal at 10 a.m. Sunday.

Calvert Hall, McDonogh School, St. Paul’s and Gilman School each went 4-0 in pool play. The Greyhounds were unable to advance to the quarterfinals because they lost a tiebreaker (goals allowed in pool play) to Culver.

The Hounds are 5-0 overall with a final match Sunday against St. John’s College from the District.  Loyola Blakefield and Boys’ Latin School each went 3-1 in pool play.

After the championship game, the second session of the NHSLS begins. Archbishop Spalding, Glenelg Country School and Baltimore-based Pride and Tide Lacrosse Clubs will be in action through Tuesday. 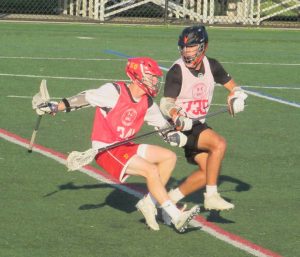