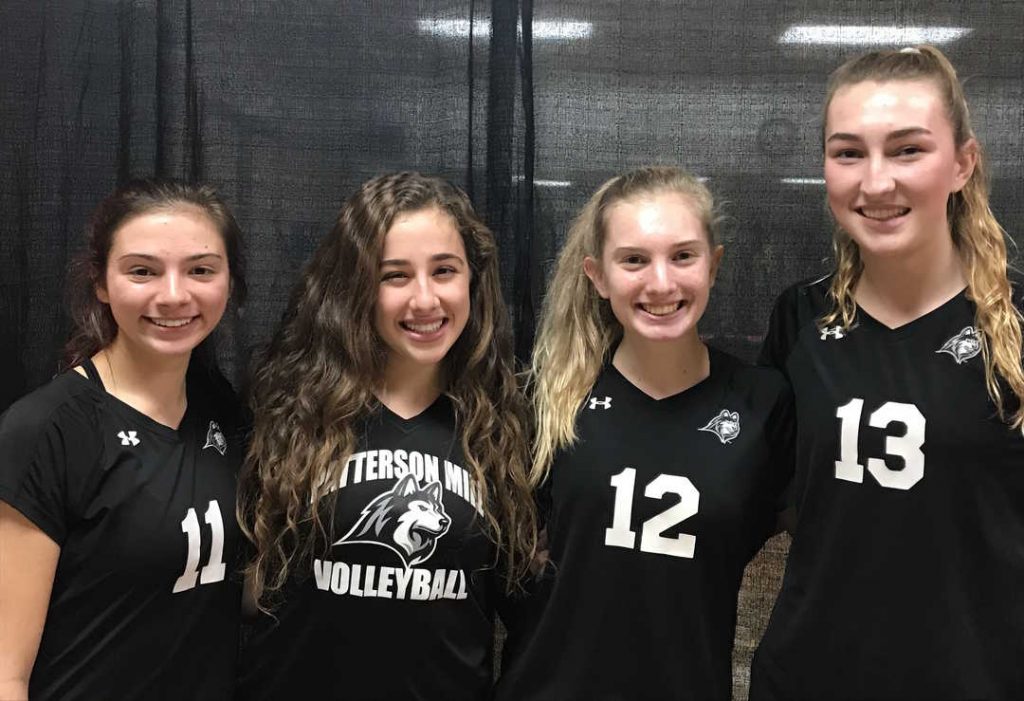 Patterson Mill’s volleyball team includes a handful of state champions — just not in volleyball. At least not yet.

After a three-game sweep of Colonel Richardson in Monday night’s state semifinals, the Huskies advance to the championship for the first time and will play Smithsburg for the Class 1A title Saturday at 5 p.m. at Ritchie Coliseum in College Park.

Smithsburg, from Washington County, has won 13 state championships. Only Williamsport (15) and Centennial (14) have won more.

This season, however, the Leopards (10-9 overall) finished the regular season with a losing record in the tough Central Maryland Conference. They defeated Western Tech Monday night, 25-11, 25-23, 25-19, but the Wolverines (15-3) pushed them, especially in the final two sets.

The teams finished almost statistically even, but the Leopards had key digs and kills down the stretch in the second and third sets to finally separate them.

In the first set, the Leopards ran out to a 15-6 lead and the Wolverines couldn’t put much of dent in it. In the second set, however, they rallied from down 9-5 to lead several times before Smithsburg broke out of a 22-22 tie on kills from Morgan Domenico and Kylie Snyder.

“We definitely did start off slow,” said Wolverines senior setter Beatrice Daudelin, “but I think our serving really gets us going a lot … and once we get a run going, we are able to just take a little point and turn it into a whole lot more than that.”

The Wolverines never led in the third set, but timely kills from Imani Ward, Daudelin and Anisah Weaver helped them rally to within three points late in the match.

Seniors Rachael Durham and Avaion Barry led the Wolverines with six kills each while senior Sheri Adewumi had five. Daudelin had 21 assists.

“Hats off to our opponents,” Smithsburg coach Rachel Bachtell said. “They scrapped. They sent a lot of hard balls at us and they served the ball tough at us. They gave us everything we wanted tonight.”

The Wolverines were in the semifinals for a third straight year and reached the title game a year ago.

Durham said she would have thought it “crazy” as a freshman to be told how much success her team would have during her career.

“I would [have been] really shocked to see where we are now and how far we’ve come as a team as far as like knowing each other, communication, trusting each other, being as close as we are on and off the field. It’s crazy to feel the love and you can really be a part of it,” Durham said.

Wolverines coach Eric Jett said that two years ago his team was just happy to reach the final four. This year, they had planned to at least reach the title game. Still, he said they weren’t surprised by the Leopards. 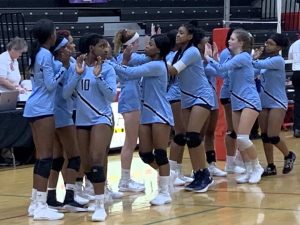 Western Tech players congratulate each other after Monday’s Class 1A state volleyball semifinal. The Wolverines’ season ended with a 3-0 loss to Washington County’s Smithsburg.

“We all know what Smithsburg’s all about, 13 state championships,” Jett said, “and my first ever time here in 2011, they knocked us out and, of course, two years ago they did as well. They are, as a coach, a lot of what I aspire for my team to be… We, at least from my perspective, tend to line myself up against them quite a bit and see how we’re able to perform and I think we did a good job tonight. I’m very proud of my team.”

At the post-game press conference Monday, Patterson Mill senior Katie Keech was surrounded by teammates who have won state titles — Meadow Santoriello in tennis, Delaney Madsen in lacrosse and Katerina Lomis in swimming.

“Saturday, we’re each going to add one and Katie’s going to get it,” said Loomis, whose Huskies have never played in the state title game and had reached the semifinals only once before, in 2009.

Madsen, a 6-foot-1 junior outside hitter, had 18 kills and junior setter Santoriello had 25 assists.

In the first set, Richardson scored six of its eight points on Huskies’ service errors.

The Colonels put together their best stretch in the second set when they scored seven straight points on Alexis Bates’ serve to pull within 16-11.

“Sometimes we just kind of get ahead of ourselves and we lay off,” Santoriello said. “We didn’t really have a lot of energy at that time, because we took it off, relaxed a little bit and we can’t do that and I think we realized that. We were trying to hype ourselves back up… and once we got that one point, it really started our run again.”

Madsen had three kills and Keech added another to finish off the set.

The Huskies ran up a 10-1 lead in the final set and held off another Richardson surge, this time a six-point run on Kayla Peterson’s serve, but they again finished the game strong on attack.

“Meadow had fantastic sets,” Keech said, “and when the pass is there and the set, it’s just boom and [the hitters] love hyping up our team and bringing success but we couldn’t do it without our team. It’s really a team effort. We just happen to get the final boom.”