Poly girls pull away from No. 11 River Hill for return trip to state 3A Final Four (VIDEO HERE!) 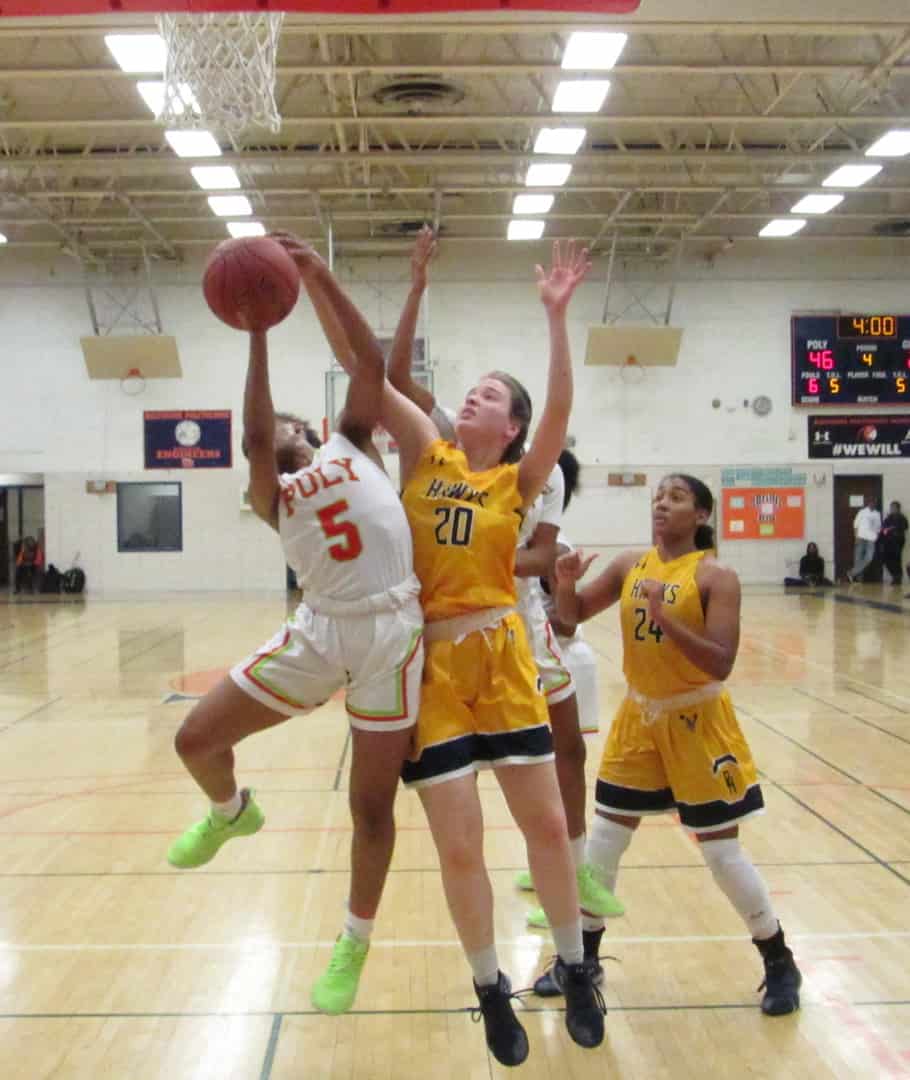 Poly’s Da’Brya Clark (5) gets a defensive rebound against River Hill’s Alexa Thompson during the second half of Friday’s Class 3A state girls basketball quarterfinal. The top-ranked Engineers advanced to the state Final Four at Towson University with a 54-25 decision over the No. 11 Hawks inside Augie Waibel Gym in Baltimore City.

Poly High’s girls basketball team has had its eye on the prize for almost a year, so the Engineers weren’t worried when River Hill’s inside game gave them a little trouble at the start of Friday night’s Class 3A state quarterfinal.

The No. 1 Engineers calmly recovered, tightened their interior defense and rolled to a 54-25 victory over the 11th-ranked Hawks to advance to the state semifinals for the seventh time in eight years and their 10th overall. They have never won the championship, but they’ve been aiming for it since last March.

In next week’s final four, the Engineers (24-1 overall) will meet Montgomery County’s Rockville, an upset winner over Southern Maryland’s Great Mills, 44-42, at Towson University’s SECU Arena. Defending champion Frederick and Easton will square off in the other semifinal. Both games will be Thursday with times to be announced.

For a veteran Poly team that lost in the state semifinal two years ago and in the state final last season, there’s only one way they want to end their season — especially for seniors Dasia Townes, Cache’ Wilson and Jade Gross, who have been on the team since they were freshmen.

“I just feel like every year has been a milestone for us,” Wilson said. “Since it’s our senior year, we have a different type of hunger this year. We have to get it. It’s no ifs ands or buts about it.”

Against River Hill (20-5), last year’s Class 2A state champion, the Engineers made their move in the second quarter and kept it going.

The Hawks went to their inside game early with 5-foot-11 senior Saniha Jackson and 5-10 sophomore Caroline Duffy. Duffy scored twice and Jackson once while Anhyla Smith had two assists. That helped them keep pace with River Hill, 6-6.

Then the Engineers, who have recovered from as much as a 15-point deficit this season, got a putback from Ajae Petty and a slick move to the hoop from Wilson to end the first quarter with a 10-6 lead.

A runner from Tenea Robinson and another follow from 6-2 senior Petty gave Poly a 14-6 lead and River Hill never recovered.

Jackson scored three times in a 6-2 River Hill run, but she and Duffy would not score again from the field as the Engineers started double teaming Jackson and covering Duffy in their active zone while getting more transition buckets.

“I think [Jackson] was an extremely strong post and mobile,” Poly coach Kendall Peace-Able said. “I don’t think anybody on their team gave up at all. I just think that there were some things that we did that stopped them from being in their comfort zone so to speak. I know [Smith and Kennedy Clark] typically hit a lot of jump shots for them and [Jackson] is a mid-range kid, but she didn’t get much mid-range today, so I think we handled both dynamics pretty well.”

Jackson’s final basket cut the Engineers’ lead to 16-12 with 4:40 left in the second quarter, but Poly outscored the Hawks, 20-2 over the next seven and a half minutes.

Petty finished off a three-point play to give Poly a 36-14 lead with 5:10 to go. A transfer from IND who didn’t join the Engineers until December, Petty has grown into a major inside force and finished with 12 points, 12 rebounds and five blocks.

The Engineers, whose only loss has been to Riverdale Baptist, were led by Gross with 13 points and three blocks. Townes had eight points, four rebounds and two blocks. Wilson also added eight points.

For the Hawks, Jackson was the only player to finish with more than four points, contributing 13 as well as eight rebounds.

At several times during the game, Hawks coach Teresa Waters was visibly upset with the officiating, especially in the third quarter when Petty went to the line on back-to-back plays, but the Hawks were called for a charge on a similar drive to the hoop in between. She called a timeout to chat with the official.

But, Waters said, even when the Hawks got to the line, they struggled to convert, hitting just six of 18 free throws.

Poly seniors Cach’e Wilson and Dasia Townes, who combined for 16 points Friday evening, will get one final chance at a state title. The Engineers will play Montgomery County’s Rockville in 3A state semifinal Thursday evening at Towson University’s SECU Arena.

River Hill managed just three field goals in the second half, including a 3-pointer from senior guard Clark, her only basket of the game.

“We got the sixth seed (in the state quarterfinals) and we knew it would be an uphill battle,” said Waters, who started three of her seven sophomores. “It wasn’t impossible, but we just didn’t get it done.”