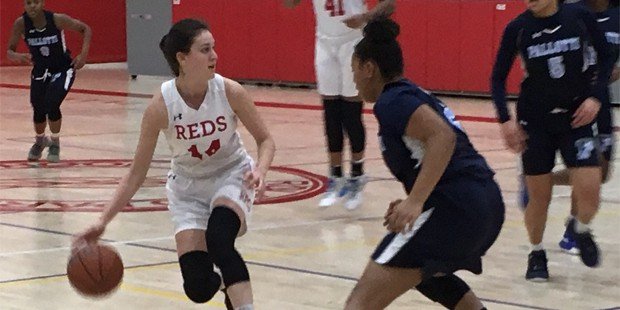 Roland Park Country School forward Mir McLean said that when she looks around all the championship banners displayed in the top-ranked Reds’ gym, she can’t find one for basketball. 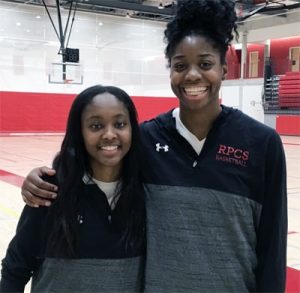 McLean and her mates, who are on a mission to change Roland Park’s championship legacy, took an emphatic step toward that goal when they romped past No. 7 St. Vincent Pallotti, 58-28. on Friday in an IAAM A Conference semifinal, setting up a showdown against three-time defending champ and No. 2 St. Frances Academy on Sunday at Stevenson University.

The Reds (26-1) will be making their seventh appearance in A Conference finals, five in the IAAM and two in the now-defunct Association of Independent Schools.

They have not played St. Frances (21-3) in the title round since current Roland Park coach Dani Kell Steinbach was a standout player for the Reds 15 years ago.

Roland Park, riding a 16-game winning streak, escaped with a taut 58-57 victory over the Panthers the last time the teams met in late January. The Reds also topped St. Frances, 62-46, in their first encounter this season.

“I really like my team,” said Steinbach, who took over for her former coach, Scott Buckley, this season. “I like that we set out to win a championship from the first day of the season. We have worked extremely hard. We wanted the opportunity and we earned it. Nobody gave us anything.”

Her team was dominant from the first play against the Panthers (15-10) — a McLean layup on a pass from senior guard/forward Maria Ferariu. McLean, who totaled 19 points and 10 rebounds, would score two more quick buckets in what turned out to be a 15-1 run to open the game.

She had help in the scoring department from the uber-quick senior point guard Ja’Niah Henson, who led all scores with 20 points and added three assists. The Morgan State commit nailed four 3-pointers in the contest and used her speed to dribble past flummoxed Pallotti defenders in transition.

While the versatile Ferariu had an off-night shooting the ball (4-for-13, 0-4 from 3-point arc), she still collared six boats and handed out three assists.

By halftime, the Reds were up, 37-7, while making a defensive statement against a team that was held to its second-lowest point total of the season.

“It was just one of those nights for us,” Pallotti coach Joe Mathews said. “They really mades us feel uncomfortable. There were no gaps in their defense to get any space. We were a little rattled, too. It’s hard to win when you’re missing layups and not hitting you shots. Plus, they were keeping us off the boards.”

McLean said that a fast start and fearsome defense were part of a plan to keep moving forward.

“We know what we’ve had to do all year,” she said. “We were just doing what we had to do. We were really excited tonight. We had a lot of energy early.”

McLean said that the Reds talk about the championship drought “all the time” and are eager to change things.

“We look on it as a responsibility,” she said. “We hold each other accountable, and set goals for ourselves.”

Henson said that while the title-less streak can be a burden, “it’s also motivation” to capture one.

“Every teams wants to win a championship,” she said. “And in order to do that we have to stay together as a family.”