One more run at Reitz 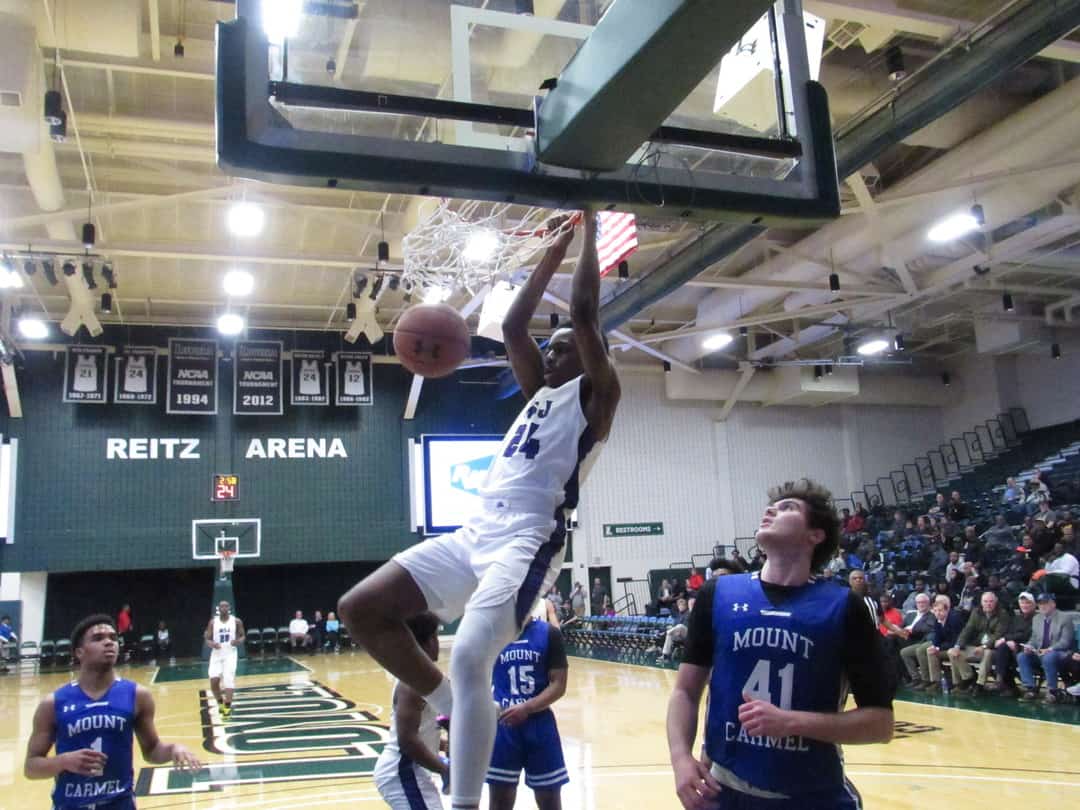 Mount St. Joseph’s Jason Edokpayi slams through two of his 14 points during Friday’s Baltimore Catholic League Tournament semifinal against Mount Carmel. The top-ranked Gaels advanced to Sunday’s title game with a 73-60 victory over the Cougars at Loyola University’s Reitz Arena.

The last time Mount St. Joseph High boys basketball team played at Reitz Arena, the Gaels were outmanned and overmatched by DeMatha Catholic in the Charm City Classic. A lot has changed since for the Gaels, whose season will end at the Loyola University facility with a chance at another championship.

Behind a balanced scoring effort, Mount St. Joseph dominated the upstart Cougars between the second and third periods to earn a record 17th BCL Tournament final. The Gaels will play top-seeded and second-ranked St. Frances Academy for possession of the Brother D. John Smith Trophy, Sunday at 1 p.m. at Reitz Arena.

Down five in the first half, Mount St. Joseph eventually acquired a 20-point lead entering the fourth as all five starters finished in double figures. Tyler Brelsford had 14 points and junior guards Ausar Crawley and Antonio Hamlin each added 13 and 11, respectively.

Brelsford, a George Washington University recruit, came to life in the second half for the Irvington school, scoring all his 14.

“We weren’t ready to play in the first half. Coach (Mount St. Joseph coach Pat Clatchey) got into us in the locker room at halftime,” said Brelsford. “We want to see St. Frances in the championship Sunday.”

Trailing 22-17 in the second quarter, Mount St. Joseph closed the half on a 16-2 run with Crawley tying the game at 22 with a 3-pointer and followed with two more baskets. After having two players scored in the first eight minutes, the Gaels had five score in the second quarter.

Clatchey said the Gaels “got through the first half in good shape,” but needed to pick up things on the defensive end, especially against Mount Carmel’s Deon Perry and Koralt Turp.

“We need to do a better job neutralizing one of them,” said Clatchey. “We needed a little big more balanced scoring and Tyler stepped up in the second half.”

Though Brelsford owned a hot hand in the third, he said having teammates capable of sharing and scoring has been the biggest improvement in the Gaels since the start of the season.

“They can’t key in on one guy,” said Brelsford, who added three assists. “We have a lot of scorers and it helps us over the long run.”

Perry, a second-team BCL selection, had a game-high 27 points for Mount Carmel (17-13), which upset third-seed and No. 9 Spalding in the quarterfinals Wednesday. Turk added 16, but only five in the second half. The Baltimore County squad made a final run, pulling to 63-53 with 3 minutes, 45 seconds left in regulation.

Perry came up with a steal on the ensuing possession, but missed a layup. Edokpayi scored in the paint, and after a Cougar turnover, Hamlin converted a pair of free throws for a 14-point cushion with 2:49 left.

Mount Carmel second-year coach Trevor Quinn said his team lost momentum in the final minutes of the first half with Turk on the bench with two fouls.

“Our guys competed pretty hard. We had a pretty year compared to last year and hope to continue to grow from it,” said Quinn, whose team won six games last season. “We got a couple of more guys who really helped and guys who came back really brought in to what we were doing.”

Stines and Hamlin both said the “long season” contributed to the Gaels’ slow start. The proverbial finish line is 32 minutes away for Mount St. Joseph, which will face St. Frances for a fourth time Sunday.

The Gaels denied the nationally-ranked Panthers a second straight MIAA A championship with a 76-63 win at Harford Community College last Sunday evening. Sunday, Mount St. Joseph will try to stop St. Frances from becoming the first team to 3-peat since the Gaels did it in 2012, 2013 and 2014.

“We know what to expect,” said Clatchey, whose team has won two of the three matches against St. Frances this season. “It’s our seniors’ last game. Obviously, you’d like to see them go out with a win, but a BCL championship.”

“This will be my last game in a Mount St. Joseph jersey and I want to go out with a bang and leave a legacy,” said Brelsford. “For me and my guys we want to go out as No. 1 in the city and show what we’re really about.”