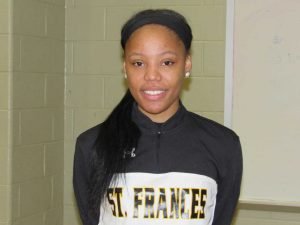 Taneara Moore had 20 points Thursday in St. Frances Academy’s victory over John Carroll School in an IAAM A Conference basketball semifinal. The No. 1 Panthers will play second-ranked McDonogh School for the title, Sunday evening at 6 at Stevenson University in Owings Mills.

The two-time defending league champ Panthers (20-4 overall) will play No. 2 McDonogh School for the crown, Sunday evening at 6 at Stevenson University. The Eagles defeated No. 3 Roland Park Country School, 73-69, in the other semifinal.

Delicia Pennick and Michigan State University recruit Nia Clouden each added 10 points for the Panthers, who led 25-2 after one quarter and 44-13 at halftime. The East Chase Street school has now won 38 consecutive IAAM A decisions, including postseason.

It will be the third straight matchup between St. Frances and McDonogh in the final. The Panthers won, 56-47, last season, and 58-46, two seasons ago.