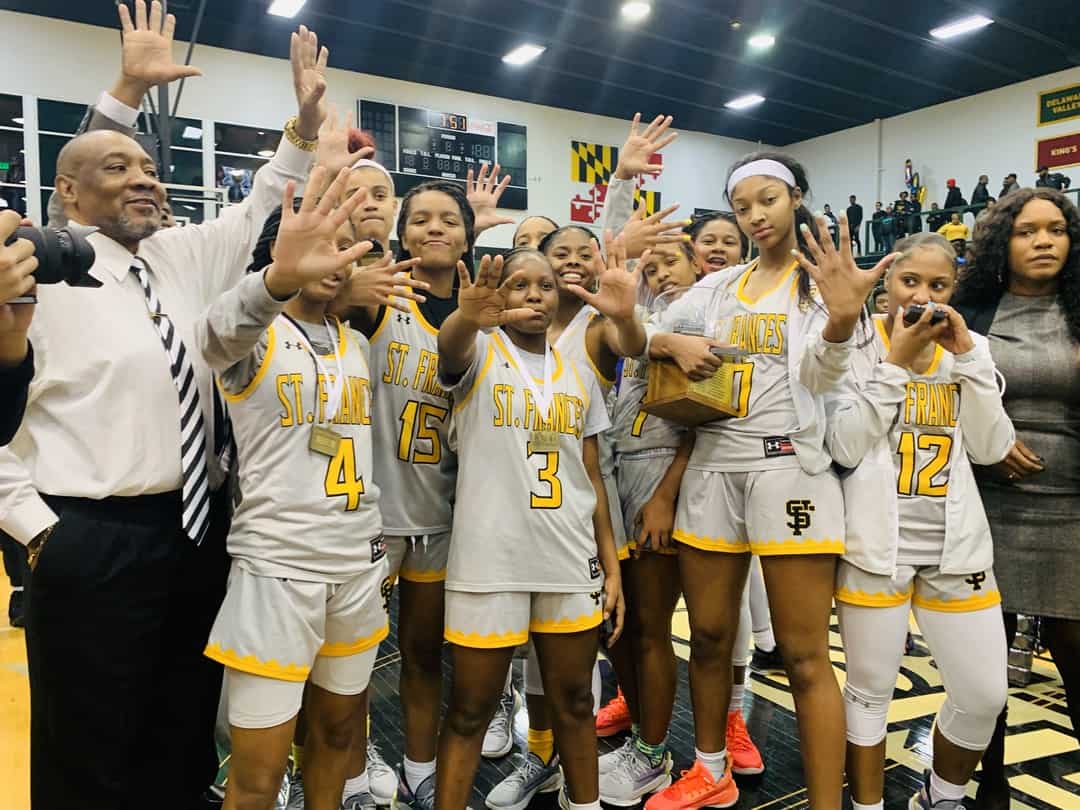 All A’s: Anani Humphrey, Aniya Gourdine and Angel Reese was key for No. 3 St. Frances Sunday evening. The Panthers retained the IAAM A Conference crown with a 55-51 victory over fourth-ranked Pallotti in front of more than 1,600 at Stevenson University.

St. Frances Academy point guard Aniya Gourdine plays a little bit in the shadow of her McDonald’s All-America teammate Angel Reese, but the junior embraces the pressure when it comes to her.

In Sunday night’s IAAM A Conference championship. Gourdine stepped to the free-throw line with 12.6 seconds left and No. 3 St. Frances barely holding on. Fourth-ranked St. Vincent Pallotti had cut a 12-point St. Frances lead to two and 6-foot-3 forward Reese had fouled out of the game.

Gourdine hit both free throws for a 55-51 lead and few seconds later, a wild celebration took over the court at Stevenson University in Owings Mills where a standing room only crowd of more than 1,600 watched St. Frances win its fifth straight A Conference title.

Gourdine had one thing running through her mind as she stepped to the line.

foot“I’m thinking it’s just a regular free throw, no pressure. I practice that free throw 1,000 times,” she said. “It was the same thing last year. Our coach said it was deja vu. I knew I had to make them to seal the game…”

The title is the 13th since 2001 for St. Frances (25-3) and Jerome Shelton, who has more wins (611) than any coach in Baltimore girls basketball history. Reese and fellow senior Khalia Turner are the school’s fifth class to win the A Conference championship all four years. This is the second longest title run for St. Frances which won six in a row between 2003 and 2008.

“I’m really happy, kind of emotional,” said Reese, who played a major role in each title of her career. “I feel like I couldn’t do it without my teammates and coaches. I’m just happy.”

In addition to Reese’s 18 points and Gourdine’s 14, junior forward Anani Humphrey scored 18, playing a huge role on the inside with Reese playing on the wing for much of the first half and getting into foul trouble late in the second half.

Pallotti coach Joe Mathews said, “We were playing a 2-3 zone and [Humphrey] was cutting off the ball really nicely through the lane and they were hitting her.  We were extending to their shooters on the wing which opened up the lane for her to get those looks. She did a good job finding space.”

The battle of Panthers was charged with emotion on both sides as top-seeded St. Frances wanted to keep its streak alive while second-seed Pallotti (21-6) aimed to win its first A Conference title. St. Frances, which won both regular-season meetings, led early, but second-seeded Pallotti rallied a couple of times to lead by one, lastly at 24-23 on Lauryn Russell’s 3-pointer with 3:08 left in the second quarter.

Thirty seconds later, Gourdine tied the game with a free throw and then fed Reese for a layup to take back the lead St. Frances would never lose. Pallotti, however, would rally to within one midway through the third quarter as well as within two in the final seconds.

Pallotti’s 6-foot senior point guard Eniya Russell, a McDonald’s All-American headed to South Carolina, fouled out with 6:46 left in the game. She had just five points, but Pallotti missed her ability to push the ball up court and initiate the offense.

When Russell fouled out, St. Frances had just started what would be a 12-1 run to push ahead 51-39 with 3:30 left in the game. Reese picked up her fourth foul shortly after that.

A couple of St. Frances turnovers, however, helped Pallotti get back in the game. Makayla Waleed converted a turnover into a 3-pointer. Jania Hall’s basket and Vashae Rideout’s 3-pointer brought Pallotti within 51-47 with 2:30 to go.

Kameryn Dorsey then fed Humphrey for a layup to stop the run.

“I think we got a little careless with the basketball, made some uncharacteristic turnovers and they were able to get some live ball turnovers out in the open court and score,” Shelton said. “I think that got them some more defensive energy. I thought at that point they kind of picked their defense up. We kind of struggled to get the ball up court. That’s what happens in games. We just had to get ourselves composed again and play basketball.”

But Pallotti wouldn’t let go of the momentum. Hall, a senior guard who finished with 19 points, hit two free throws and then Reese fouled out with 1:05 left.

Waleed banked in a jumper with 56 seconds left to pull within 53-51, but Pallotti missed its next two shots. Humphrey was fouled on the rebound after the second one, Hall’s jump shot, caromed of the rim.

Humphrey missed the free throw and Pallotti’s Larri Sydnor grabbed the rebound. At the other end of the court, a pass rolled off a Pallotti players fingers and into Gourdine’s hands. She was fouled as she tried to drive past 3-point line.

Matthews said playing a trapping 1-2-2 defense after Russell fouled out helped Pallotti get back in the game.

“We’ve had a couple games and the latest was the McDonogh game (in the IAAM semifinal). We were down eight in that game and had to bounce back. We never felt like we were out of it obviously,” Mathews said.

In the second quarter, fouls stopped a big Pallotti run. After scoring the first six points of the quarter to take a 16-15 lead on Hall’s follow shot, Russell picked up a foul and quickly drew a technical foul. Turner and Gourdine each hit two free throws and then Gourdine nailed a 12-footer for a six-point turnaround and a 21-16 St. Frances lead.

For St. Frances, a lot of adversity surrounded the team this season, much of it fed by social media. Reese, who will play in the Jordan Brand Classic on March 27 and the McDonald’s All-America game on April 1, is rated the No. 1 wing in the country by ESPNW — which made everyone want to beat her.

Reese, who ranks among the all-time great Baltimore high school girls basketball players, has already had her No. 10 jersey retired. She’s happy to cap her career with another trophy before she heads off to Maryland.

“My four years have been the longest four years of my life,” Reese said. “I went through a lot of adversity, a lot of obstacles, a lot of tears… but I’m happy to go home and go out with a bang. (No.) 10 is done, 10 is retired so I’m happy, just a happy feeling.”