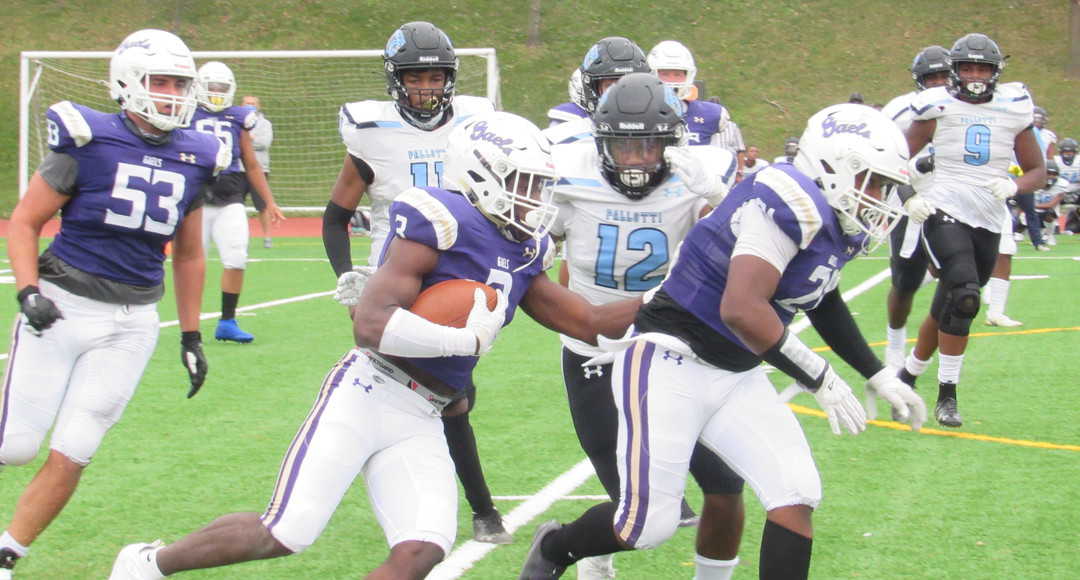 With teammate Koron Lambert leading the way, Mount St. Joseph running back Bryce Cox (3) looks for yardage as Pallotti’s Braxton Harsley closes in during Saturday’s football contest. The Gaels blew a 19-0 second half lead, but recovered to claim a 22-19 double overtime victory over the Panthers in Irvington.

There was smiles and some sighs of relief on the Mount St. Joseph High football sidelines after Scott Martin’s game winning field goal Saturday afternoon.

“It hit off the post and that’s not a good enough result,” said Martin. “It should be over the uprights and right down the middle. Clearly, I haven’t put in enough work so I got to go back and put in more work until I can make it confidently in those critical game-time situations.”

It was pretty obvious after a 22-19 double overtime victory over St. Vincent Pallotti at John Plevyak Field in Southwest Baltimore, the Gaels have much to improve on.

But after 371 days, Mount St. Joseph football is back.

“We’ve been through a lot of adversity,” said Gaels senior wideout Ausar Crawley.

It’s been a roller coaster for Mount St. Joseph since hoisting the MIAA A Conference championship on a frigid night last November at Archbishop Spalding’s Whittles Field. In April, Rich Holzer stepped down as coach for the same position at Calvert County’s Northern.

Dom Damico, one of the MIAA’s most successful coaches, replaced Holzer. The Gaels weren’t able to gather for offseason conditioning – albeit altered – until the summer due to the COVID-19 pandemic.

The MIAA allowed member schools, at their own discretion, to participate in an “open season” for the fall starting late last month. The Gaels were slated to start Nov. 7, but a positive COVID-19 test sidelined them.

“It’s very important that we’re playing…it’s tough though,” said Damico, who won eight MIAA titles in 24 seasons at McDonogh School (stepped down in 2018). “When you shut a team down for COVID related issues and don’t get to practice for 14 days, it’s hard to get back out there rolling again.”

Mount St. Joseph’s defense, the catalyst for its 2019 championship run, came through Saturday after blowing a 19-point second half lead. The Gaels stopped Pallotti two times inside their 1-yard line to force a second overtime.

After missing wide on a field goal attempt in the first OT, Martin’s kick hit the right upright and the ball fell over the crossbar.

Far from perfect, but it was victory nonetheless for The Mount. The end appeared unlikely early Saturday.

Late in the opening quarter, Atkins (seven-of-20, 249 yards) hit an open Wilkins down the sidelines for the Gaels’ first score of the season. Crawley grabbed a pass from Atkins and sped into the end zone, completing a drive that featured a 70-yard pass play and an Atkins fumble.

“We definitely didn’t execute the way we’d like to, but we got a lot of seniors on the team,” said Crawley, one of 24 seniors. “We encouraged each other, continued to fight and made enough plays to win the game.”

Mount St. Joseph got the ball back at Pallotti’s 10 after a Panther fake punt attempt backfired. The Gaels overcame two holding penalties as Crawley captured Atkins’ toss on a skinny post play.

Pallotti (2-1), which rallied past Calvert Hall College last weekend, produced another second half comeback Saturday. Atkins bobbled a shotgun snap, and Panther senior linebacker Connor Maloney fell on the ball in the end zone for a touchdown.

Prince, who rushed for 120 yards, scooted 15 yards for a score, bringing Pallotti to 19-13 late in the third quarter. The Laurel school got the ball back after an interception by Cameron Prescott, but couldn’t convert into points.

Late in regulation, Pallotti marched 80 yards in nine plays as Prince pushed his way over the goal line with 19 seconds remaining. The Gaels blocked Maloney’s extra-point kick and the first overtime of the 2020 pandemic football season was secured.

In the first OT, Maloney sacked Atkins on third down, and Martin’s 35-yard field goal attempt was tipped and sailed right. Prince was stopped inches short of the goal line on a second down run.

“It’s one thing just to practice and play with your teammate, but having real competition is something else,” said Schulze, a junior two-way linemen. “We let off the throttle and let them comeback.”

Panthers coach Tony Ashley was proud of his team’s effort.

Mount St. Joseph, with Scott Martin (left), Ausar Crawley and Stephen Schulze, had to work in its 2020 football debut Saturday. Martin’s 35-yard field goal in the second overtime lifted the Gaels to victory at John Plevyak Field in Baltimore City.

“I told them at halftime they could cut the deficit or let it get larger, they chose the first,” said Ashley, whose team’s 12-game winning streak, dating back to last season, ended Saturday. “It was a team effort. On the scoreboard we lost, but in our hearts and minds, we won.”

Despite the uneven showing, Mount St. Joseph’s championship pedigree proved in the end. The Gaels will have to progress quick with a Thanksgiving morning date with Archbishop Spalding (2-0) next.

“They’re one of our rivals and we got a bullseye on our back because we beat them pretty bad last year, and they have a lot of momentum,” said Crawley. “We know we got to play better than what we did today.”