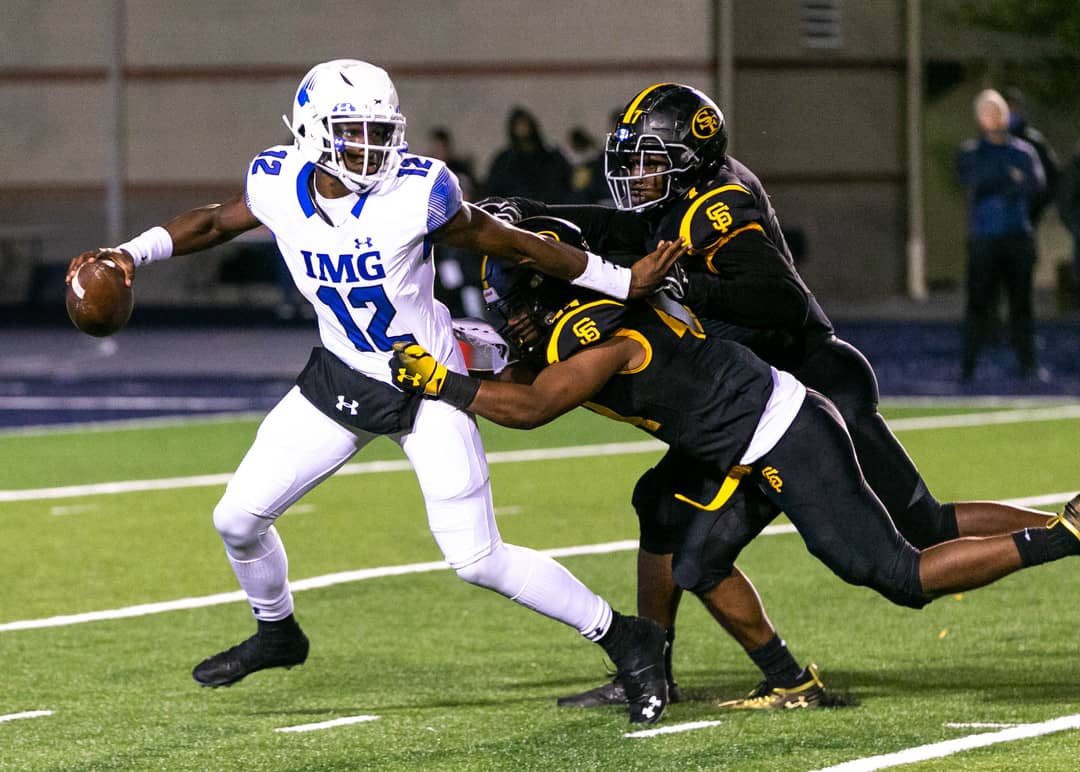 St. Frances linebacker Aaron Willis has IMG quarterback DJ Boney (12) in his grasp during last season’s football contest at Morgan State University. Willis, an University of Tennessee commit and the Panthers are considered one of the nation’s best heading into the 2020 campaign by MaxPreps.

Despite not being part of a league, St. Frances Academy has a place among the county’s best high school football teams.

The Panthers are ranked 4th in MaxPreps’ preseason national Top 25 poll. The East Baltimore school finished No. 5 in MaxPreps’ final poll last season, going 11-1, with its lone blemished a 34-18 loss to California’s powerhouse Mater Dei in the Trinity League (California) vs. USA Showcase in Southern California.

The East Chase Street school, 34-1, over the last three seasons with a final national Top 5 ranking in each, is regarded again as a mythical national championship contender with a stacked roster, led by rising senior linebacker Aaron Willis, the area’s top defensive prospect. He’s verbally committed to the University of Tennessee.

The Panthers have been No. 1 team in the final VSN Top 20 poll a record four consecutive seasons. They have played an independent schedule the last three seasons after, in the spring of 2018, MIAA A Conference schools opted not to play St. Frances, citing safety and competitive imbalance concerns.

The Panthers and Loyola are independent members of the MIAA A. The Dons opted to temporarily leave the MIAA A Conference following the 2017 season.

St. Frances have several marquee matches lined up this coming season including a trip to Texas powerhouse Duncanville in September and late season rematch with Florida’s IMG Academy, MaxPreps’ preseason No. 1.

The Panthers routed IMG Academy, 35-7, last year at Morgan State University, in what was considered the program’s biggest win since morphing into a national power. St. Frances is 44-3 over the last four seasons (won 13 games previous three seasons combined).