On pace to repeat 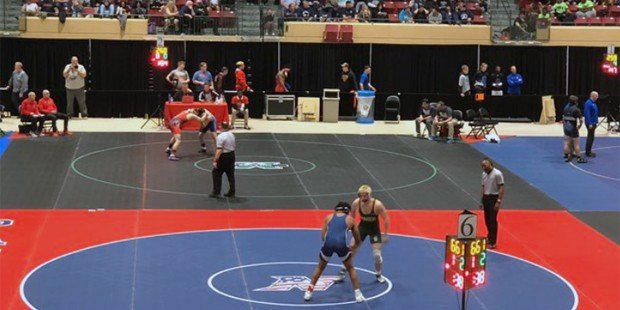 Riveira was pleased to improve to 35-0 with 25 pins on the year (119-2, 80 pins career) and stay on course to become the ninth Marylander to earn four state titles, yet he also desires an initial state championship for his 120-pound junior teammate Constantinos “Staki” Gourgoulianis (120), who placed third as a sophomore.

“We’ve been best friends for a long time since like fourth grade,” said Rivera, who is a combined 27-0 with 18 of his 20 pins being in the first period over the course of his Upper Chesapeake Bay Athletic Conference, regional and state tournaments.

To that end, Riveira and Gourgoulianis (35-1) fashioned a game plan for Leonardtown’s Sean Vosburgh. Winner of a state title as a freshman and a runner-up last year to Riveira, Vosburg (37-4) defeated Gourgoulianis, 4-2, earlier this season at C. Milton Wright’s Iron Horse Duals.

Gourgoulianis pinned his first-round opponent in 40 seconds before gaining revenge on Vosburg with a come-from-behind fall at 3:46 of their quarterfinal.

Gourgoulianis’ victory earned a semifinal berth against Montgomery County and Class 4A-3A West Region champion Alex Gonzalez (40-2) of Clarksburg High, and could meet the winner of Saturday’s semifinal between junior Frank Antonelli (18-3) of Annapolis and sophomore Trey Kratko of Chopticon.

“[Vosburg] got the first takedown and I was losing 6-0, but I wasn’t too worried about it because he doesn’t have a gas tank and I knew if I kept doing that he’d slow down. When I went to a stand up, he was behind me trying to do a mat return,” said Gourgoulianis.

“I reached between my legs, scooped his foot, grabbed up around his head and took him backward on a crazy cradle. I had James working his tilts on me for the past three weeks, so as soon as Vosburg tried to hit it, I shut it down immediately. As soon as I locked that up I knew he wasn’t getting out and that it was all over for him.”

Riveira looks to get beyond Richardson for a clash with the winner between Atholton’s No. 2-ranked senior David Panda (38-0, 16 pins) and Springbrook’s No. 4-ranked Pierre Jean (38-4)

On Friday, Jean’s 8-3 quarterfinal victory over Quince Orchard’s Rico Cornejo avenged a 7-5 loss in their Montgomery County final after Jean had won their initial bout, 12-0.

“They’re in my house. [Show Place Arena] is like my second home, and when I’m in this building, I feel like nobody can touch me,” said Riveira, who embraces the annual trek from C. Milton Wright in Bel Air of Harford County to the state tournament in Upper Marlboro of Prince George’s County.

“It take an hour and a half to get here, and today, I slept the whole ride. Every year for me I feel more and more calm. Once I’m here, with every match, I’m trying to go hard and to pin everyone as fast as I can.”

Smith reached his semifinal on a technical fall and a second-period pin, but could clash for the crown against senior defending 152-pound champion Owen Butler (25-0) of LaPlata, who will meet Havre de Grace junior Gavin Lloyd (38-1) in the semifinals.

Smith won a 138-pound clash of undefeated state champs by fall over Glenelg’s Jared Thomas last year, and must get beyond Southern-Garrett County senior Jake Sweitzer (45-3), a 3-2 loser to Butler in last year’s semifinal.

“Legacy has always been a big thing for me,” said Smith. “My coaches are always telling me to seize my moment, so I’m always trying to face the best competition, and that’s what I’m trying to do.”

“[Athey] is a good wrestler who wrestled smart, but I wrestled smarter,” said Dufour, who looks to meet either freshman Jacob Brenneman (39-3) of Northern-Garrett County or senior Shamar Baines of Stephen Decatur in the finals.

“Coming into this, being that it’s my senior year, being a two-time state champion, everyone’s chasing me. I just want to come out, demonstrate all of the hard work that I’ve put in and just want to go big and then go home.”

Returning state champion Drew Sotka (182) of Glenelg rose to 43-2 on first- and second-period pins, and will have a semifinal battle with North Harford senior Theodore Stinson (11-0), who was fourth in last year’s Class 4A-3A states as a wrestler at C. Milton Wright.

“Winning the state tournament has been my goal for all season long, and it means everything to me right now,” said Sotka, who is coached by Glenelg alumnus and former state champion Bichner siblings, Matt and Dan, who were title winners in 2006 and 2008.

“Everything I’ve done this season has led up to this point, and I need to believe in what I have done to get here. In terms of my legacy, there are only a few two-time state champions in Glenelg history, and it would be an amazing honor to be a part of that company.”

Senior two-time fourth-place finisher Will Vaxmonsky (160) of Marriotts Ridge rose to 44-0 with a fall in 1:48 of his semifinal, and will challenge Class 4A-3A South Region Victor Listorti, a junior from Chesapeake-Anne Arundel County.

Going for their second Class 2A-1A crowns are seniors Jesse Fresh (106) of Mountain Ridge and Maximus Bentley (138) of Easton as well as sophomore Noah Reho (145) of Stephen Decatur, and looking for repeat crowns on the 4A-3A side are Damascus senior Tim Furgeson (195) and Wootton junior Erc Liau (113).

Fresh must get beyond Williamsport’s sophomore third-place finisher Zach Starr if he is to gain a potential return bout against Pizzuto, who faces sophomore Howard County champion Alex Tamai.

Bentley (32-2) pinned in 49 and 38 seconds to reach his semifinal opposite Baltimore County and Class 2A-1A North Region runner-up Jerome Vonziah of Overlea, and could meet the winner between sophomore third-place state finisher Kevin Fultz of Poolesville and senior Jaron Fernandors (39-1) of Fairmont Heights.

Reho (36-3) will pursue his third straight tournament fall against Eric Smith of Queen Anne’s, and could face the semifinal winner between seniors Matthew Miller of Kent Island and Rihan Sisley of North Caroline.

Having signed to play football at Villanova, Furgeson (48-0) takes a 93-match winning streak into his semifinal against Sherwood’s Adam Pfeiffer (32-2), whom Furgeson defeated by 13-4 major decision for his fourth straight Montgomery County title on February 22.

The winner between Liau and Guttentag will have a title match against the semifinal winner between North Point juniors Kielin Huff (39-3) and Matthew Oh of Leonardtown.

Damascus junior Michael Emerick (138, 48-3) is trying to improve on second and third place finishes at states, but must get beyond his semifinal against Springbrook senior Armon Nettey (17-1), whom he has beaten three times, once by fall.