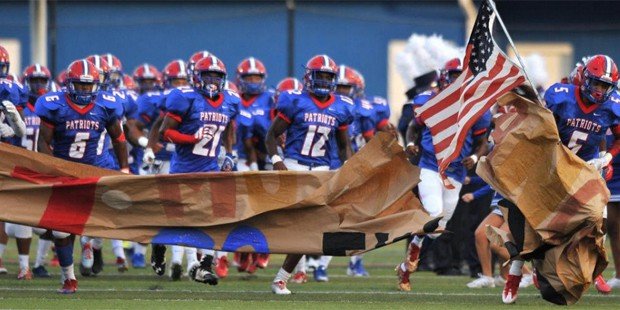 Bruins fall to 0-2 for the first time under Harris

No. 10 Broadneck has been on an amazing run in Anne Arundel County, having not dropped a regular season football game in three years, prior to last week’s season-opening loss at Potomac.

The Bruins, however, now face the unprecedented dilemma of being 0-2 after rival Old Mill hosted them on Friday and scored a 28-14 victory in Anne Arundel County league action.

Junior running back Joey Graves tossed a 37-yard option pass to Cameron Winborne for a touchdown to get Old Mill off to a fast start in the opening quarter and Cameron Tull came on to run for 137 yards and a pair of touchdowns to lead the Patriots (1-1).

Broadneck sophomore quarterback Josh Ehrlich, who threw for 230 yards, rallied the Bruins from a 14-0 hole with a 23-yard touchdown pass to Andre Woods, Jr., with 20-seconds left in the second quarter, and 1-yard TD sneak, in the third quarter, to pull his team within two points, at 14-12, entering the final quarter.

Old Mill, however, responded with a pair of fourth quarter scores, including a clinching 35-yard TD run by Tull, with 4:39 to play.

This is the first time a Broadneck team has started 0-2 in the nine year tenure of head coach Rob Harris.