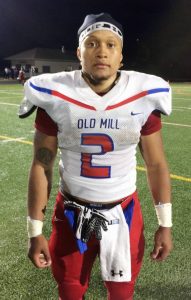 Senior running back Isaiah Batts ran for 165 yards on 32 carries scoring four touchdowns to lead VSN’s No. 9 Old Mill to a 35-8 romp at No. 10 Annapolis on Friday night. (Photo by Pat O’Malley)

Big games usually come late in the season, but sometimes they come early with lasting consequences and new heroes.

Isaiah Batts, the latest in a long line of not big but lightning quick, sturdy and fumbler-free Old Mill running backs, ran wild for 167 yards and four touchdowns on 31 carries as VSN’S No. 9 ranked Patriots humbled No. 10 Annapolis, 35-8, at Al Laramore Field in the Cap City. In his coming-out game, the 5-foot-8, 185-pound Batts tallied a touchdown in each of the four quarters, including an 8-yard run and subsequent 2-point conversion run by quarterback Markus Thompson with 8:34 left in the game to make it 35-0 and start the running clock.

“We had to come out here tonight and be aggressive,” said Batts, who ran for over 500 yards in 2016 as the backup to Sirus Gray, who rushed for 1,703 yards and 24 touchdowns. “I had no doubt about our offensive line to do the job. I love having that rock in my hands.”

In evening its record at 1-1 and dropping Annapolis to 0-2, Old Mill did give up a 33-yard touchdown run to Frank Pratt in the last four minutes to resume the regular clock.

Despite being only the second game of the 2017 season, the result could have major consequences in terms of post season play for teams in the Class 4A East region where Old Mill and Annapolis reside. The winner jumped on track while the loser faces the likely challenge of having to win its last eight games to finish 8-2 for a shot at making it to the playoffs. It’s not likely that 7-3 would cut it.

Old Mill/Annapolis was a matchup of two teams that had been blown out in their season openers, Annapolis at home by VSN’S No. 2 Archbishop Spalding, 56-14, and Old Mill on the road in Charles County at North Point Point, 42-0. North Point is also a 4A East team. 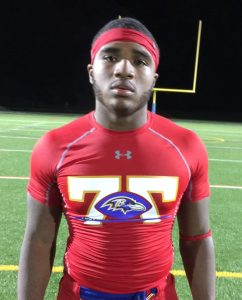 Dajour Thompson, a senior linebacker, was in on six tackles as Old Mill’s defense stymied the Annapolis offense Friday night in the Cap City. The Patriots rolled 35-8 as the Panthers did not score until 3:47 was left in the game. (Photo by Pat O’Malley)

Old Mill finished a perfect 10-0 in Anne Arundel County league action last fall, including a 15-14 victory over Annapolis in the final regular season contest to win the local championship, but was upset by Broadneck, 20-17, in overtime in the 4A East playoffs. Annapolis went on to advance to the Class 4A state semifinals with victories over North Point (45-21) and Broadneck (48-34) before bowing to eventual state champion Quince Orchard, 42-14.

“We have scrappy kids and they absolutely rebounded from our first game,” said Old Mill’s seventh-year head coach Chad McCormick, who is 66-9 with a state championship (2011) to his credit. “We lost 30 players from last year’s team and I’m proud of the way they played against a really tough team tonight. This is Isaiah’s opportunity and I expect him to take advantage of it.”

Batts didn’t waste any time getting his breakout night underway by taking the ball six times for 63 yards in Old Mill’s 8-play, 65-yard opening drive in the first seven minutes for a 7-0 lead. Batts ran into pay dirt from nine yards out and Joey Mason booted his first of three extra-points after Annapolis started the game with a three-and-out.

Old Mill drove 89 yards in 16 plays taking nearly 8 minutes off the clock to take a 14-0 lead to intermission. Batts, who got the call nine times on the drive gaining 53 yards, capped it off with a six-yard TD burst with 20 seconds left in the half. Old Mill reeled off 37 plays to just 18 by Annapolis in the first half and the margin was 67-33 for the game.

Senior linebackers Aaron Dawson and Dajour Thompson spearheaded the Old Mill defense that stymied the Annapolis offense led by quarterback Ahmon Middleton. Dawson and Thompson combined for a dozen tackles and Thompson rung up a sack. Junior d-back Nehemiah Carter chipped in a pick for the victors.

The Old Mill defense did not let up in the second half while their offensive compatriots added two more scores to make it 27-0 after 36 minutes. Batts crashed in from the five and M. Thompson found Avion Robinson wide open for a 45-yard scoring pass. As mentioned earlier, Batts closed out the scoring in the fourth period.

“It was important that we bounced back after our opening loss at North Point,” said Dajour Thompson. “We’re looking to make the playoffs and keep our legacy of 18 straight appearances going.”