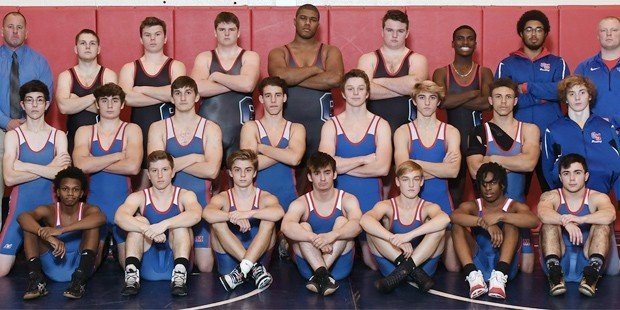 “Caron was down by about four or five points entering the third period. Caron lateral-dropped him to his back for a takedown and two back points,” said coach Jim Grim, in his 15th season at Old Mill.

“I think we were still down by three at that point, but after that scramble, Caron threw him again for the win. Caron’s only a junior, but he’s a very special kid who is one of the best football running backs in the state. He didn’t start wrestling until the ninth grade, so this was pretty exciting.”

Tull, among the Patriots’ four juniors who placed, reached the finals on a fall and a semifinal 16-3 major decision, improving his record to 20-3 on the year. One of five sophomores who competed for the Patriots, Cohenour reached the title match on first-period falls in 97, 49 and 70 seconds.

“Last year at Paint Branch, I took second. This is my first time being a high school tournament champion,” said Cohenour, who improved to 12-5. “Everybody on our team is extremely young, so a lot of us are still learning the rules. I’ve always been confident that I could do it, and I think this was a great tournament for us, helping us to build momentum.”

It is indeed a big win for a Patriots (21-4 dual meets) squad which opened the year by winning the Armed Forces Tournament at North Hagerstown and placing third at the Winters Mill Duals, both in December.

“This is a huge win for us with South River and Arundel coming up next week. Our confidence is flying high,” said Grim, 49, whose Patriots were Class 4A-3A state tournament champions in 2003 and 2006. “This is the most youthful team that I’ve ever coached, but we’re young, tough and ready to roll against South River at Old Mill on Wednesday.”

Eric won a battle of state champions, 3-2, over senior Jesse Fresh (21-2) of Mountain Ridge, his 3-0 third-period lead overcoming a reversal by Fresh with 11 seconds left in their bout.

Jason used pins in 66- and 29-seconds to reach the finals, where he scored a takedown and 14 first-period nearfall points for a 16-0 technical fall victory over sophomore Frankie Rizzo of Mountain Ridge.