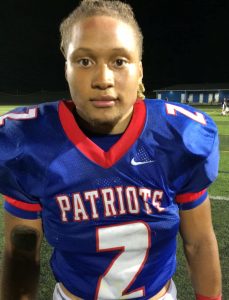 Old Mill High football coach Chad McCormick said “it was a heckuva ball game” and you would have been hard pressed to find anyone to disagree.

The ninth-ranked Patriots defeated No. 13 Meade, 20-13 at Bob Golliday Memorial Field in Millersville Friday night in Anne Arundel County action as junior Ryheam Tull raced 26 yards on a counter play with 3 minutes, 43 seconds remaining in the game for the decisive score.

“It was a great feeling when I scored and I knew the game was over right then,” said Tull, who posted his first game-winning score and also had dashes of 36 and 27 yards on reverses during the game. “We battled hard and had some ups and downs, but got it done.’’

Meade just couldn’t finish or it would have claimed a huge victory to avenge last season’s 44-8 loss to the Patriots. Mustang coach Albert Jones, who has done a remarkable job in his three seasons in restoring the team to potential playoff status after succeeding Rich Holtzer, who moved onto Mount St. Joseph, knows his guys could have won Friday night’s epic battle.

“We missed too many opportunities,’’ said Jones. “Old Mill played a great game and we did at times.’’

Meade fumbled on its first possession of the game and went onto to give up the ball on fourth down in the red zone four times and missed TD passes over the middle twice. The Stangs did happen to score both of its touchdowns on fourth down plays to go 2-for-6 in that category.

While Meade ran up and down the field and dominated play in the second period with running 26 plays to just 13 by Old Mill, the Patriots managed to jump out to a 13-0 lead on a pair of TD runs by senior Isaiah Batts. 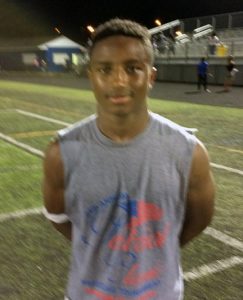 “We had a few hick-ups but for the most part it was a really great game,’’ said Old Mill’s standout senior linebacker Aaron Dawson, who led the charge against the potentially explosive Meade offense that was coming off a huge win over Arundel last week.

After returning the kickoff to its own 27-yard line, the Stangs fumbled on their first play with defensive lineman Claudy Dawson recovering for the Patriots. It only took the home team seven plays to convert six points on a 5-yard run by Batts, who would go onto accumulate 137 yards on 23 attempts.

The Pats missed the extra point, but not on their next score that came on the first play of the second quarter and was the 11th play of an 85-yard drive after the Pats stopped the Stangs on fourth down for the first time in the contest. Batts’ 12-yard burst and the extra-point kick by Joey Mason gave the Patriots a 13-0 lead to start the second quarter.

Tull’s 27-yard sprint on a reverse and a pair of pass plays of 13 and 16 yards from quarterback Markus Thompson to Dajour Thompson highlighted the drive. On the 16-yard pass play, D. Thompson jumped over a couple would-be tacklers to set up the Batts’ sixer.

Meade would get on the scoreboard with 24 seconds left in the half as senior quarterback Alijah Mateen (8-of-18, 92 yards), who’s developing into one of Anne Arundel’s top quarterbacks in his first season as a starter, connected with Cameron Smith on a 28-yard scoring play on a 4th-and-11 situation.

The Mustangs would tie it up at 13 on their first possession of the second half. Erick Johnson burst right up the gut on a fourth down and inches from their own 36 to go 64 yards to pay dirt and Osagie Evbuomwan booted the point-after to tie it up.

The running of Batts, who said he “ate some mustard at halftime’’ to get rid of some cramps that slowed him down in the first half, enabled the Patriots to gain some control in the second half after the Stangs tied it up. Batts rushed for 89 of his 138 yards in the final 24 minutes.

“It was really an exciting game,’’ said Batts.“We came out a little rocky in the first half, but finally picked it up when we had to.’’

Meade’s senior running back Darion Straughn kept his team in the game with his superb cuts and tackle-breakers as he finished with 150 yards on 16 carries. Meade rushed for over 350 yards.

“Darion always plays hard and he is the heart and soul of our team,’’ said coach Jones. “Tonight he fought through cramps to keep playing.’’

“We missed some things because of their defensive plays, but we stuck together and I thought our punter Joey Mason (also place kicker) did a great job with his placements which kind of goes unnoticed,’’ said McCormick.

The epic battle ended when defensive back Cameron White intercepted a pass at the Meade 35-yard line with 46 seconds remaining and Old Mill quarterback M. Thompson took a knee twice.