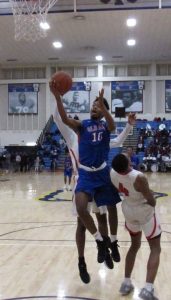 Old Mill’s Mahzi Thames drives to the basket for two points during the second half of Friday’s boys’ basketball contest with Woodlawn at the Basketball Academy. The No. 18 Patriots pulled away for a 63-58 decision at Morgan State University’s Hill Field House.

Evenly matched, Friday’s Old Mill-Woodlawn boys’ basketball contest would likely come down to which team making the right adjustments. The No. 18 Patriots did just that, pulling away from the seventh-ranked Warriors, 63-58, at the 22nd annual Baltimore City Public Schools Basketball Academy at Morgan State University’s Hill Field House.

Mount Carmel (5-9) led 8-6 after the opening quarter before the Falls Road school went on a 44-10 surge. Arianna Alleyne, Stephanie Long and Olivia Harris each finished with four points for the Cougars.

On the strength of 11 3-pointers, the Cougar boys posted a 63-55 decision over No. 8 Lake Clifton. Senior guard William Miller scored 20 points for Mount Carmel (10-9) and Dwight Felton added 17.

After building a 14-point first half lead, the Cougars withstood several Lake Clifton charges. The Lakers closed to 56-51 with about three minutes remaining in regulation, but scores from sophomore Dominic Carrington (11 points) and Felton put Mount Carmel in the clear.

The Cougars, who reached the MIAA A Conference and Baltimore Catholic League final last season, have won four straight and is above .500 for the first time since early December.

“I think guys were a little rattled by the early season and not having Terry Nolan, but guys are starting to step up,” said Mount Carmel coach Hakim Hibbert, who has nine regulars back after graduating standout Nolan (now at George Washington). “It’s January and conference time so guys are really trying to get locked in.” 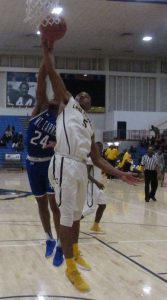 Lake Clifton’s Benjamin Carter and Mount Carmel’s William Parker battle for a rebound. The Cougars built an early double-digit lead and held off the No. 8 Lakers for their fourth straight victory.

Gray finished with a game-high 22 points for Lake Clifton (7-2), which got to within five five times after trailing 21-7 after the opening period. Junior Armon Harried and Alphonso Barney each added 10.

New Town got four points each from Noel Carter and junior Jordan Guerrero in overtime, claiming a 58-53 victory over Hammond. Carter, a senior guard, led the Titans (7-2) with 16 points.

The Baltimore County school led by 13 points at halftime and nine entering the fourth before the Bears rallied. Four players scored for Hammond, led by 15 points from Cameron Stallings and 14 from Robert Gordon. Jalen Bourne and Micah Henry added 12.

Polite converted a free throw, giving the Clippers (8-2) a 59-57 lead with 5.6 seconds to play. After Edmondson called timeout with 3.7 seconds left, Keith Bolden’s desperation heave from past half court missed.

Sophomore guard Antonio Fliggins led the Red Storm (4-3) with 13 points, and DeShawn Ruffin and Sean Evans each finished with 11.

In the nightcap, 10th-ranked Perry Hall got 19 points from Mississippi commit Anthony Higgs and Tyler Holley finished with 12 in a 74-58 victory over Prince George’s County’s Riverdale Baptist.

The Baltimore County squad opened a double-digit advantage as Higgs, 6-foot-8, drove the lane and deposited a left-handed dunk. Walker and Laquill Hardnett each added 11. 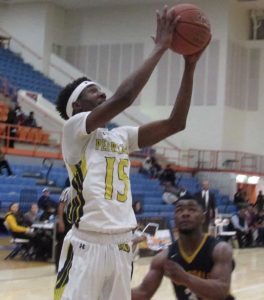 Perry Hall’s Tyler Holley drives to the basket during the fourth quarter of the Gators’ match with Riverdale Baptist School. Holley finished with 12 points in the Gators’ 74-58 victory in the nightcap.

“Every game we’re getting better and turning more into a team,” said Panateogou. “They played hard. We went with a shorter bench so we had some fatigue but they battled through.”

Donovann Toatley had 19 points for Riverdale Baptist (13-6), ranked No. 11 in the District region by the Washington Post. The Upper Marlboro private school takes on No. 11 Patterson Saturday at Hill Field House.

In a battle of two of the area’s better public squads, Old Mill pushed all the right buttons in the second half against Woodlawn. Senior center Hollique Johnson scored 23 points for the Patriots (8-3), and Avion Robinson added 14.

The defending Anne Arundel County champions held the Warriors without a field goal for nearly six minutes, bouncing back from a loss to league rival and 20th-ranked Meade Thursday. The Patriots, playing the third of four games this week, won at No. 16 Annapolis Tuesday.

“We’ve been talking about our offense not being effective in stretches, especially when teams force you to execute,” said Francis. “The shot clock can be used to your advantage and it also can be a determent if you’re not paying attention. We got the shots we wanted to run and we got layups.”

“We were aggressive, unlike the Meade game,” said Patriots junior guard Mahzi Thames. “We showed effort and heart in the fourth quarter.”

Thames, a transfer from Meade, added 11 points as the Millersville school assembled a 13-2 run, turning a 41-39 third quarter deficit into a 53-43 lead midway in the fourth.

Robinson, a junior guard, tied the game at 41 with a basket , followed with a pass to Daevone Johnson in transition for another basket. Thames started a transition break with an interception and found Robinson, who put the ball high off the glass, giving Old Mill a 45-41 lead entering the fourth.

The Patriots extended the lead to 52-43 as Thames scored after a Johnson block. Thames’ free throw gave Old Mill its largest lead, 53-43, with 4:14 left in regulation before Woodlawn scored its first basket in nearly a quarter.

“We started switching defenses, going from zone to man, giving them different looks,” said Robinson. “They weren’t hitting the shots they wanted to shoot. We wanted them to keep shooting the deep three.”

The Warriors (9-2) pulled to within 59-56 on Reshaud Garrison’s 3-pointer with 41 seconds left in regulation. Thames deposited two free throws with 32.6 seconds to play before two free throws from Mark Brinkley brought Woodlawn within a possession with 26.5 seconds remaining.

The Warriors still had life after Robinson made one of two free throws with 17.1 seconds, but the turned the ball over. After a free-flowing first half, Woodlawn struggled from the perimeter the final 16 minutes, making just eight shots.

“We got to find other ways when you’re shooting abandons you,” said Warriors coach Bobby Richardson, whose team made eight shots in the opening quarter. “They made us indecisive on defense. They’re constantly moving.”

The Patriots complete their daunting week with a match with undefeated and fourth-ranked Dunbar Saturday afternoon.