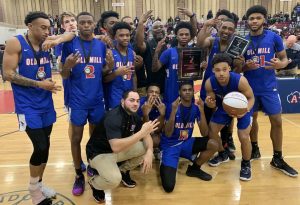 by Joe DiBlasi and Derek Toney

The Millersville squad had to twice stave off fourth quarter comeback attempts from the Bruins to claim its third consecutive Anne Arundel boys championship. The senior duo of Daevone Johnson and Avion Robinson paced the Patriots (18-5 overall) with 24 and 17 points, respectively.

Old Mill had a 38-27 cushion early in the third quarter, only to see Broadneck, behind hot shooting from Che Colbert, rally to withing two, at 51-49, with 4 minutes, 44 seconds left in regulation. The Patriots responded with a bucket from Robinson and an NBA 3-point dagger from Johnson, in just over a minute to swell their advantage to eight.

The Bruins (17-5) climbed back to within four with 54 seconds to play, but were forced to foul. Old Mill converted 6-of-8 from the charity stripe down the stretch to seal the victory and become the first program to three-peat since Annapolis, which won four straight (1999-2002) under legendary coach John Brady.

Patriots coach Mike Francis said Robinson and Johnson, who’ve been the backbone of their championship run, were the factors Saturday.

“Those two carried the load,” Francis said. “The difference between this game and the first time we played them, was that tonight we had 46 points in the paint and only hit three threes, and we were able to execute in the 4th quarter.

The first time we played them, neither one of these guys played in the second quarter. Our guys on the bench were not prepared for that and they weren’t prepared to play a team like Broadneck.”

The Bruins won the regular season match, 66-63, that proved to be difference in claiming the Anne Arundel County regular season crown. The Cape St. Claire school, which got 18 points from Logan Vican, led only once in the rematch Saturday.

Robinson paced an early surge with two threes and scored eight points in the first six minutes of the game as Old Mill led 17-11 after the opening eight minutes. The Bruins answered with a 9-2 run to gain their only lead of the evening at 20-19 in the second.

Johnson answered with six of his own to help carry Old Mill to a 31-25 lead at halftime. The Patriots took what seemed to be a commanding 38-27 lead early in the third, but the Bruins would not quit.

“Broadneck played well. They are disciplined and their offense is precise,” said Francis. “They are one of the best teams we’ve seen in the half-court all season.”

“He’s [Francis] done a great job with that program,” said Williams, in his second tour of duty as Bruins coach. “They got the ball out and they were pushing the tempo, and they did some stuff in the half court that gave us a little trouble.”

The Patriots and Bruins could meet again in the Class 4A East Region final in two weeks. Both are top-seeds in their respective section.

“We have to get back to what we do because it’s playoff time now,” said Johnson, whose team reached the 4A state final four in 2017. “It’s lose or go home, so we need to get back in the gym and figure out what we need to do.”

Old Mill girls have “one for the thumb,” and they can thanks Deja Atkinson. The junior’s 3-point play with 4.3 seconds left in regulation was the difference as the Patriots won their fifth straight championship.

Atkinson highlighted a frantic final minute, driving to her right before releasing a runner that hit off the box and rattled through the cylinder as she was fouled. After a South River timeout, Atkinson completed the 3-point play with the free throw.

Atkinson said the play was designed for her.

“I got the ball and knew I had to go to the basket,” she said. “They were either going to foul me or I was going to make the basket. I knew that I also had to make that free throw, so I went up there with a strong, positive mentality.”

The Patriots stayed resolute, rallying from a 56-52 deficit in the final 40 seconds. The victory avenged a 56-55 loss to South River last month.

“That was the toughest of all of them,” said Old Mill coach Rick Smith. “That is the kind of games we’re going to have with them. We match up pretty much the same way, it’s a good physical game and it’s a good rivalry we’ve had with them now for the last few years.”

The Seahawks led 56-52 after Sullivan’s two free throws with 39.7 seconds remaining in regulation. Mallett got Jaya Dews’ missed jumper, scored and was fouled, pulling Old Mill to within 56-54 with 31.6 seconds left.

Mallet missed the free throw, but she got the rebound and put the ball off the glass, tying the game with 28.3 seconds. Sullivan was fouled with 22.4 seconds remaining, and converted one of two free throws to regain the lead for the Seahawks.

Old Mill turned the ball over and Sullivan was fouled with 14.7 seconds left. She missed two free throws in the double bonus, and Old Mill called timeout with 7.4 seconds remaining.

Then, Atkinson did the rest.

“We’ve played together for a long time. We know each other like the back of her hands,” said Old Mill senior center Sydney Faulcon. “We’re dedicated and pick each other up all the time.”

Old Mill led 31-23 at halftime, but South River, thanks to Sullivan scoring her team’s first eight points, grabbed a 48-46 advantage in the fourth. The Edgewater school had a 54-50 advantage entering the final minute of regulation.

After Atkinson’s 3-point play, South River turned the ball over on an inbound violation. The Seahawks fouled Julia Bagnell, who converted one of two free throws.

South River coach Mike Zivic, whose team won the Anne Arundel regular season title, was pleased to see his team battle back in the second half.

“Unfortunately, they just made one more basket than we did,” said South River coach Mike Zivic. “We didn’t back down. I think today proved that little things make a difference and we’ve been preaching that in practice. I think that is something that, going forward, we’ll be ready now that it is playoff time.” 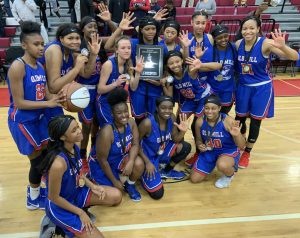 The rivals could cross paths in the 4A East Region final. Old Mill last reached the state final four in 2015.

“We’re focused on the task ahead,” said Faulcon.