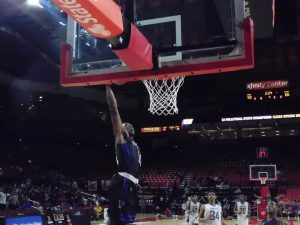 Patterson’s Jalen Willis prepares to slam two of his 14 points in Friday’s Class 2A state boys basketball semifinal against Thomas Stone. The No. 1 Clippers advanced to Saturday’s final round with a 74-54 victory over the southern Maryland school at the University of Maryland.

For most of the season, Lake Clifton High boys basketball has leaned heavily on Armon Harried and Michael Gray. But the Lakers understand they need extra contributions if they hope to win a state title.

Jermaine Tiggle answered the call Friday. His free throws with 24.3 seconds left in regulation, lifted the No. 9 Lakers to a 58-56 victory over Prince George’s County’s Frederick Douglass in a Class 1A state semifinal contest at the University of Maryland’s Xfinity Center.

Top-ranked Patterson punched its ticket to Championship Saturday in College Park with a 74-54 victory over southern Maryland’s Thomas Stone in a 2A state Final Four match on Gary Williams Court. Senior wing Marvin Price had 21 points for the Clippers (24-3 overall) and Zac Blackwell and Jalen Willis each finished with 14.

The Baltimore City champs led wire-to-wire to move a win away from a third state championship. The Clippers will play Wicomico, a 57-51 winner over Frederick County’s Oakdale in Friday’s other state semifinal, Saturday at 6 p.m. for the 2A title.

It was far from masterful, but Patterson’s grit and skill again proved out.

“We’re not that deep, but we’re the best conditioned team in the state of Maryland, so we’re going to keep pushing, pushing, pushing,” said Clippers coach Harry Martin. “Eventually, you wear teams down, but also you have to be OK as a coach to know there’s going to be runs on the other end.”

The Kane Street school raced out a 17-4 lead before Thomas Stone closed to within 3, but the Clippers never allowed the Cougars to get any real traction. Senior guard Gerard Mungo finished with 11 points and three assists.

Mungo said the Clippers’  resolve comes from off the court.

“A lot of us come from tough places in Baltimore so we already have that type of toughness,” said Mungo. “We just bring it to the court.”

The Clippers led 13-2 in the first quarter after a Blackwell steal and basket. It was 17-4 after Price’s basket opened the second quarter.

Thomas Stone finally engaged, going on a 13-4 run to cut the margin to 20-17 with 3 minutes, 26 seconds left before halftime. Patterson answered with two scores each from Price and senior Jalen Willis to push the lead back into double digits.

The Cougars, ranked 13th in the District region by the Washington Post, climbed to 32-29 on a jumper from reserve Shawn Barclay. Price dropped a 3-pointer, sparking a 9-2 run to increase the Clippers’ lead to 41-31 midway in the third.

Thomas Stone shaved the deficit to 43-37, but 3-pointers from Mungo and Tyrone “TJ”  Thomas highlighted a 13-5 run, leaving Patterson firmly in command, 56-42, entering the fourth. The Cougars got no closer than 16 points in the fourth.

Thomas, who finished with 6 points, 5 assists and 2 steals Friday, said the Clippers’ balanced in their starting five, has been the difference this season.

It’s been Gray and Armon Harried and three other guys for the Lakers this winter. So when Gray fouled out late in regulation Friday, it was obvious someone else would have to make a play.

Lake Clifton got it and it’s a win away from becoming the first team to win a state title in each of the four classifications. Armon Harried posted 27 points and 12 rebounds and Gray added 21 points and eight rebounds.

The Lakers (23-4) will play Garrett County’s Southern in the first match of Championship Saturday at 1 p.m. Lake Clifton won the 2A title last year.

The East Baltimore school is on the verge of its 6th title, thanks to Tiggle who converted two free throws with 21 seconds remaining in regulation.

“We’ve been working on free throws all season and we’ve missed some and made some,” said Tiggle. “I just knew I had to make these shots for us.”

Mike Woods’ 3-point attempt missed for Douglass at the buzzer, and the Lakers survived what coach Herman Harried called “an expected battle” with the Eagles from Upper Marlboro.

“We knew Douglass would be good, they are extremely well coached and we knew they would be prepared and it was a game that was expected,” Harried said. “We were hoping to be prepared enough to weather the storm and we did.”

They got needed reinforcements as Tiggle finished with six points and eight rebounds. David Harris had seven rebounds, including an offensive board late in regulation, setting up Tiggle’s winning free throws.

“It’s about time,” said Herman Harried of Tiggle’s contributions. “He’s a senior and we’ve been asking for help all season long. We’re very grateful he helped tonight. He brought something to the table and he picked the right time.”

The Lakers led 48-40 in the fourth, only to see Douglass to close to 54-53 on Darnell Snowden’s 3-pointer with 1:49 left in regulation. Armon Harried hit one of two free throws, putting Lake Clifton up two with 1:24 to play.

Gray was whistled for a loose ball foul, sending him to the bench for good with 1:14 left in regulation. Abdul Samb’s two free throws pulled Douglass even at 56. Kaylen Vines’ free throw with 40.4 seconds gave the Eagles their first lead since the opening quarter.

Armon Harried regained the lead for Lake Clifton, hitting the front end of an one-and-one with 32 seconds left. The second attempt caromed off the rim to Harris, and the Lakers called a timeout with 29.3 seconds to play.

Lake Clifton inbounded the ball to Armon Harried, who was double-teamed near his team’s bench. He threw the ball to Tiggle, who drove from the free throw line to the basket and was fouled.

“Jermaine’s been already sneaky on the court. You don’t know where he’s at, that’s why he sometimes has the most rebounds,” said Armon Harried. “He’s got that street ball mentality and knows how to get around. He really stepped up today.” 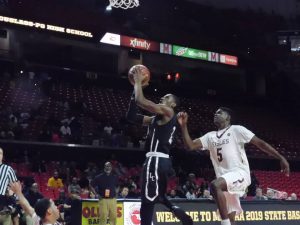 Lake Clifton’s Armon Harried drives to the basket ahead of Douglass’ Darnell Snowden during Friday’s Class 1A state boys basketball semifinal. Harried posted 27 points and 12 rebounds as the No. 9 Lakers held off the Eagles from Prince George’s County for a spot in Saturday’s final in College Park.

“It’s another team, another time we got to win and we just got to put it all out there,” Armon Harried said. “It’s not going to easy.”