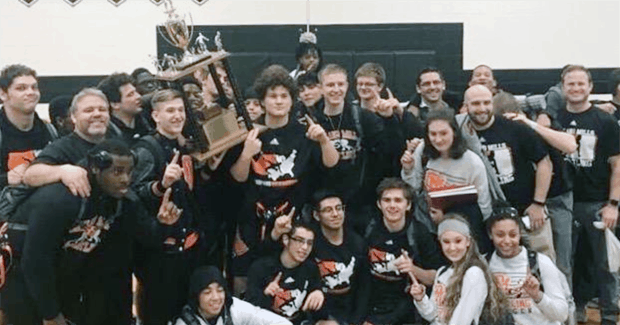 Morales (160) and Smith (285) lead the Scorpions with individual titles

It came down to the final match of the night in the one day extravaganza that was the 2019 Howard County Wrestling Tournament, Friday at Mount Hebron.

Oakland Mills, with a chance to edge Glenelg for the team title and end the Gladiators three year reign over the event, had its hopes tied up in senior heavyweight Ernie Smith who went out to face Reservoir’s Dylan Altman in the 285 final. Smith delivered with a 5-1 win, claiming the 285 individual crown for himself and vaulting his team to the tournament title as the Scorpions narrowly topped Glenelg, 217.5-215.5.

“When I saw it was going to come down to Ernie at heavyweight, I smiled on the inside having a ton of confidence in him,” said Oakland Mills coach Brad Howell. “I knew his competitive drive and preparation would payoff for him. I made sure we stayed away from the team score so that he could just focus on doing his job. He didn’t even know he won it for the team until his teammates and wrestling family mobbed him as he walked off. Pretty good moment for him and our Scorpion wrestling family.”

With inclement weather predicted for Saturday, tournament officials made an early commitment to conclude the 50th annual edition of this event in one day and stuck with it even though the forecast eventually became more favorable.

It was all the same for Oakland Mills at the end of the night as they celebrated their first County tournament title since 2015.

“The team has really started to come on since we started phase III if the season on Jan 15th,” said Howell. “We were up against some tough competition from other county teams, like Glenelg, so my hat goes off to the boys for grinding out some tough wins.”

Anthony Morales (160) also came through with an individual title for the Scorpions, defeating Glenelg’s Jacob Jones, 4-2, in double overtime in their final, as he battled from behind in the third period to get to extra time. Had Jones prevailed, Glenelg would have hoisted the trophy once again.

“I really didn’t pay much attention to the team score until half way through the finals,” added Howell. “The big come from behind win from Morales over Jones was huge for him and our wrestling family. It was a straight up gut check on his part and he passed.”

In addition, Jalen Cornelius (120), Quan Dunscomb (132) and Dylan Watt (152) each placed second for the Scorpions. In all Oakland Mills placed 11 wrestlers in the top four.

Atholton, paced by individual crowns from David Panda (113) and Sean Billups (170), as well as second place efforts from Drew Pruett (126) and Michael Johnson (182), placed third in the team standings with 187 points.

Hammond was fourth with 180.5 points. The Bears had three finalists and all three won championships. They were Shehzan Dahya (106), Keneth Rios (120) and Loic Tueguo (220).

River Hill got a title from Will Hendrickson (132) and second place effort from Eric Robinson (113) to finish 5th overall with 120 points. Howard’s Shayan Kassiri (145) and Centennial’s Jason Kraisser (152) were the other two individual champions.

Kraisser, who is now 33-0 on the season, became just the 11th Howard County wrestler to win the tournament four times