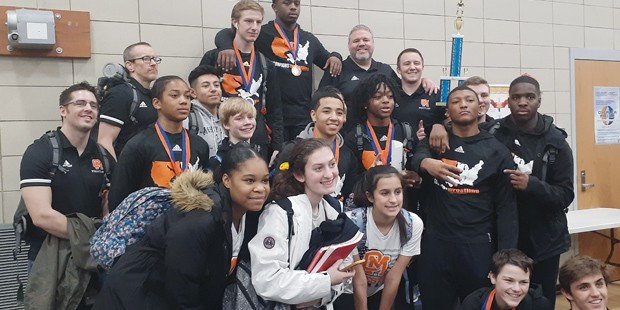 There was no team race drama on Saturday evening at the 34th Annual SnOverlea Invitational at Overlea High School. Oakland Mills had the team championship locked up before the final round and padded that lead, running away from the competition by 83 points, 234.5 to Woodlawn’s 151.5.

“We’ve been moving into phase three of our season,” Oakland Mills coach Brad Howell said. “And this was the big first challenge in that phase. We knew this would be a good test for us. We wanted to see where our performance was. And I thought our guys were accelerating at the right time. (We’re) healthy, I think they’re excited.

The strong performance saw six Scorpions reach the finals, and three complete the voyage to the top of the podium. Claiming gold were No. 7 Alex Tamai (106), Jalen Cornelius (145), and Steven Harrell (160, No. 19 at 170). It was Tamai’s and Cornelius’ second straight year standing atop the SnOverlea competition.

Harrell’s showing was the most impressive of the three as his adversary was No. 11 Jarius Cannon (Overlea), who is a former 2A/1A state placer. Cannon had the script playing out as written, almost putting Harrell away in the early going of the second period.

The Falcon was holding a 7-3 lead when the tide changed, and Harrell went to work, fist picking up a takedown to pull within two, 7-5, then letting Cannon up and executing another takedown to cut the lead to one, 8-7.

At this Point, the Scorpion went for the kill and moved to a front headlock position and used a chin-whip like move to plant Cannon on his back and secure the fall at the 3:43 mark of the second period. The stunning development led to Harrell being named Outstanding Upperweight.

“Steven’s been working hard in the off season. He’s been training hard. I think the first half of that match he was wrestling Cannon’s game. And we’ve been talking about that. He’s fallen into other people’s game for a little bit and tries to beat them at their game. Cannon’s a good wrestler and you can’t beat a kid that good wrestling what they do best. When Steven decided to start wrestling his style things started turning for him. He realizes that. He recognized that after the match. So, I feel real good about where his mind set is.”

“I was real happy with Alex Tamai at 106,” Howell added. “He just stayed in his game. (It was) a real dominant performance all the way through the six pounders. I thought Jalen Cornelius capping off his second Overlea title, looked pretty dominant on the mat and I was real happy with his wrestling.”

Woodlawn’s runner-up finish was propelled by two champs, Ky-El Ali (113) and No. 9 Justin Briscoe (195). Briscoe got by No. 19 Alfred Murdock (Western Tech), 8-4. Ali used two pins to reach the finals where he picked up a 6-3 decision against Oakland Mills’ Cowell. For his efforts, Ali was awarded the Outstanding Lightweight award.

“It feels great,” Ali exclaimed. “I had to get what I could get and take what I could take. I felt very good about the win. I felt like I did good, but I coulda did way better, there’s still a lot to improve on.”

Getting bronze hung from their neck for the Warriors were Kareem Galloway (106), Malaki Foreman (120), and Tyrone McCue (182). Jaylen Smith was fifth at 132 and Trevon Johnson placed sixth at 170.

Overlea was one-for-two in the finals. Before Cannon’s heartbreaking match, No. 15 Jerome Vonziah captured the 132lb championship, his second consecutive crown, with a 7-5 win over Fallston’s Logan Mullaney.

“I won the tournament and it’s my senior year,” said Vonziah. I” really wanted it. I really grinded for it. I practiced hard. (I) overcame adversity. I thought I could have done way better. I have to control my stamina. But this was my last chance and I won it again.”

Fallston did get one champ in Cameron Pires at 152 with a 13-4 major-decision of Claxton (Oakland Mills).

Lansdowne posted multiple champs with Jacob Lipscomb claiming the 126lb bout by pinning Junore Battle (Digital Harbor) in the third period, 5:02. No. 18 Kyree Briscoe used a fall of his own, 2:26, to end Western Tech’s Peter Jauquet’s day on a sour note.

The 170lb final featured lots of fireworks with both guys showing off their athletic prowess at various times. No. 14 Zavion Woodard (New Town) and No. 16 Taemar Rollins (Carver) clashed, with Woodard proving the rankings true, posting an 11-6 victory.

Dulaney’s Nick Schiefelbein (No. 13) edged Milford Mill’s Angel Figuerora, 2-1, for the 285lb wall chart. Joseph Turner (Aberdeen) picked up a surprisingly easy 16-4 major-decision in his encounter with Perry Hall’s Damen Tiller at 120. Tiller was a county and region champ for Owings Mills last year at 106.
Patuxent’s Chase James was impressive in the 138lb final, finishing off Oakland Mills’ Williams in the second period, 3:44. At 220, Glenelg Country School’s Jylah Bah received a forfeit from Boys’ Latin’s Mason Isaac (No. 13 at 195).

Howell was proud of his Scorpions’ efforts over both days of the tournament. 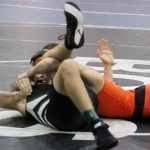 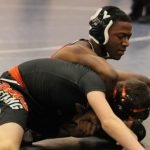 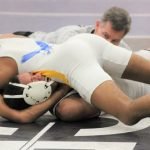 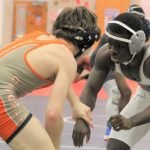 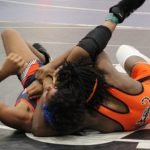