No. 2 St. Frances gets past Roland Park Country for shot at IAAM A hoops five-peat; Shelton wins 610th game 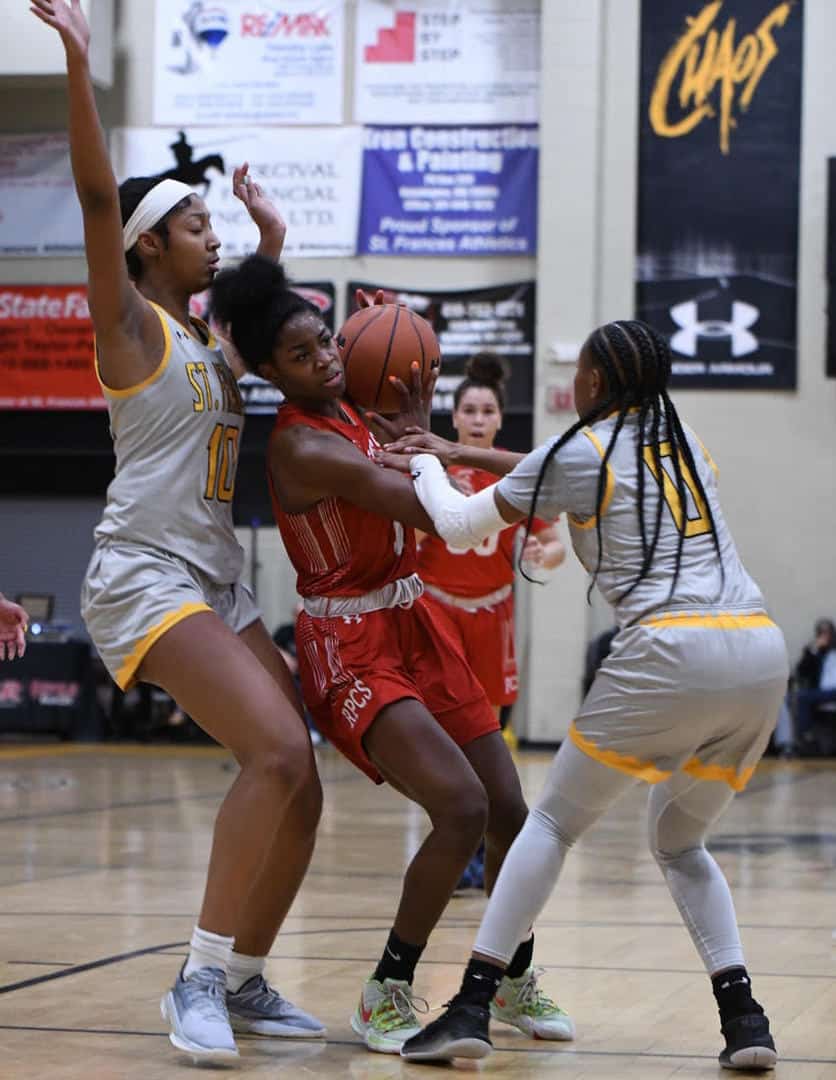 Hardly anyone watching the No. 3 Panthers pull out a hard-fought 51-48 win over seventh-ranked Roland Park Thursday, knew they were also watching the winningest coach in Baltimore high school girls basketball history.

The win over the Reds gave Shelton his 610th career victory. He took the top spot from North Harford’s Lin James Tuesday when IND forfeited to the Panthers in the quarterfinals. James won 608 games in a 48-year career before retiring in 2013.

“Congratulations to him,” James said earlier this week. “I think it’s terrific… I loved it. I had a great run, but he deserves the congratulations now.”

Shelton, in his 29th season at St. Frances, doesn’t like to take a lot of credit for all those wins.

“I’m grateful to God,” Shelton said. “He’s blessed me with a good staff and an administration that supports the program and very good student athletes to get to this point where we have 610 wins as a program. I enjoy what I do. I love working with young people.”

This week, Shelton has been more focused on his “young people,” as they aim for a fifth straight IAAM A Conference tournament championship.

Roland Park didn’t make it easy, playing by far their best game against a team that had beaten them by 39 and 27 points in the two regular-season games. The Reds blew out to a 19-9 lead before the Panthers battled back thanks to the combination of senior wing Angel Reese and junior point guard Aniya Gourdine, who combined for 40 points.

The Reds were within three in the final minute when Reese fed Gourdine on a back-door cut. Fouled on the play, Gourdine also hit the free throw that boosted St. Frances’ lead to 51-45, enough to hold off Roland Park.

The top-seeded Panthers (24-3 overall) will meet second seeded St. Vincent Pallotti for the championship Sunday at 6 p.m at Stevenson University. No. 4 Pallotti defeated No. 5 McDonogh, 46-44, in the other semifinal Thursday.

The St. Frances-Roland Park game featured two McDonald’s All-Americans — 6-3 Reese, who is headed to Maryland, and Roland Park’s 5-11 Mir McLean, who will play for Connecticut. Both rank among the top wings in the country with Reese rated No. 1 at the position in ESPNW’s Top 100 and McLean, No. 3.

McLean and the Reds (15-11) were rolling early. McLean, who finished with 16 points and nine rebounds, hit a 3-pointer and fed Cameron Levine for another. Sophia Diehl and Rain Green completed three-point plays in a 12-2 run that pushed Roland Park’s lead as high as 11 points.

“We just were excited to play again, knowing that they did beat us twice,”  McLean said. “I think last time just put a chip on our shoulder like motivation to come out there and scare them a little bit. They kind of rolled over us the last couple games so we wanted to prove something.”

The fifth-seeded Reds, who upset St. John’s Catholic Prep Tuesday, had nothing to lose, McLean said.

But the Panthers started turning the tide late in the first quarter when Anani Humphrey converted a steal. Khalia Turner carried that momentum into the second quarter with a steal that turned into a three-point play.

The Panthers took their first lead of the game, 24-21, on Gourdine’s 3-pointer 3:20 before halftime. That basket capped a 12-2 run and the Panthers never again trailed.

“We came out with a rough start,” said Reese. “We were getting double teamed. We weren’t hitting a lot of shots, but our tremendous defense — we full-court pressed them. They didn’t have a lot of strong guards, so we picked up full court and we went after them. That was the difference…”

St. Frances pulled ahead by 13 in the third quarter on Reese’s 3-pointer with 3:10 left before the Reds started chipping their way back. Green’s driving layup cut the lead to 46-43.

Then the Reds turned the ball over and Gourdine fed Reese for a layup. Simmons brought the Reds back within three, but the Reds missed three inside shots and Daimoni Dorsey got the final rebound for St. Frances.

Gourdine hit the game-winning three-point play with 42 seconds to go. With St. Frances ahead 51-45, Simmons added a free throw for Roland Park and Green scored at 2.3 seconds, but the Reds ran out of time.

Gourdine, who finished with 22 points and a handful of steals and assists, led the Panthers effort at both ends of the floor.

“Aniya came up real big,” Shelton said. “She’s been coming up big all year, finishing plays, scoring from the perimeter and just giving us the leadership that we need at the point guard position. She was huge today.”

Reese finished with 18 points and 10 rebounds.

For the Reds, who had an up-and-down season but a strong playoff run, the loss brings to an end a terrific career for McLean, who had more than 1,000 points and 1,000 rebounds. This season she had 16 double doubles.

“I saw it again and I’ve been looking at it for four years,” Shelton said. “Once Mir gets the ball and she gets in the air with it, she’s athletic enough to make a play. I don’t think I’ve seen her miss a play like that around the basketball all year. She’s really, really a good finisher.”