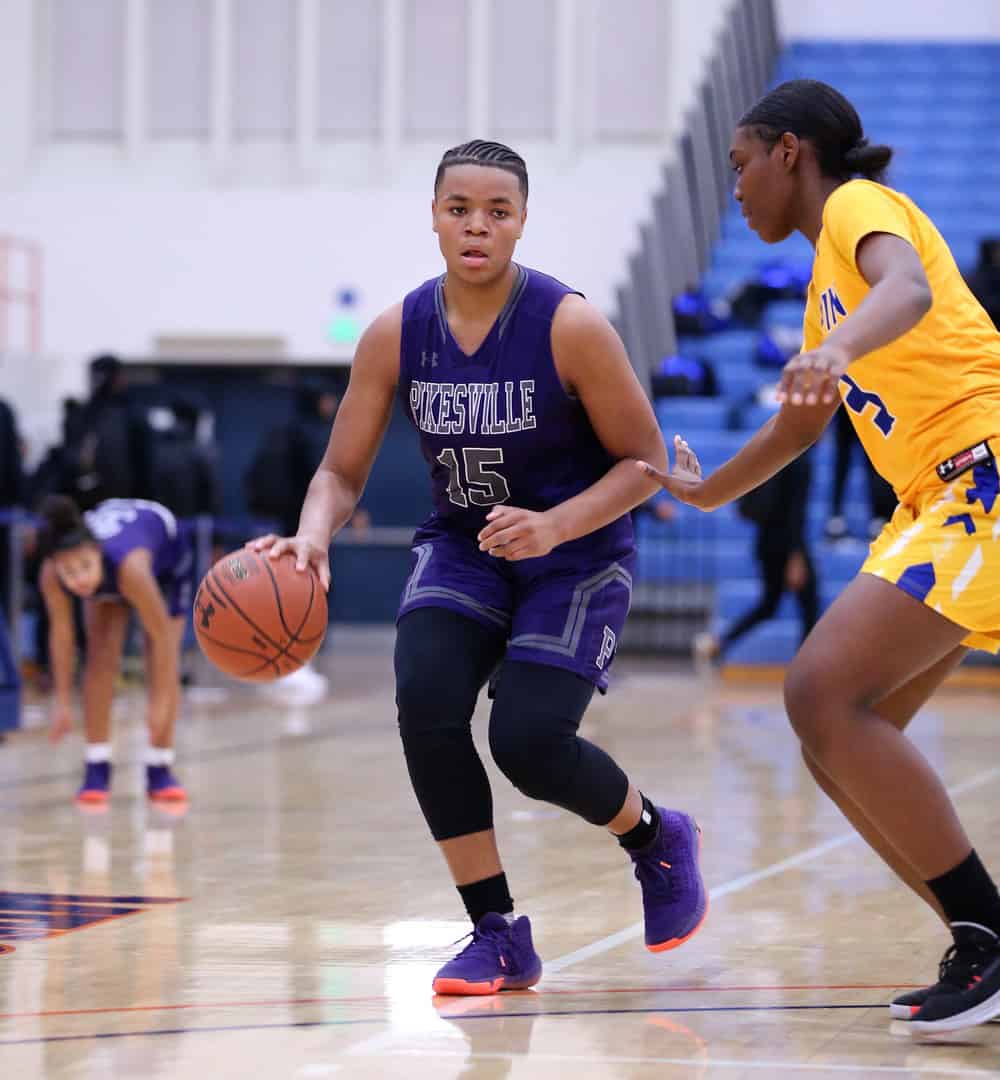 Pikesville guard Kristen Sterling (left) tries to get past Coppin Academy’s Aaries Early during Thursday’s girls basketball contest at the Basketball Academy. Sterling had 12 points as the No. 12 Panthers got past the 16th-ranked Eagles at Morgan State University’s Hill Field House (photo – Jimmy Fields Sr.)

With two major challenges ahead, Pikesville High girls basketball has been focused on making fewer mistakes. The No. 12 Panthers were able to overcome miscues for victory Thursday at the 24th annual Basketball Academy.

Pikesville defeated 16th-ranked Coppin Academy, 47-43, in the opening match of the longtime mixer at Morgan State University’s Hill Field House. Mount Carmel pulled away from City College, 57-37, in the other girls contest.

The Cougars (5-10 overall) didn’t get start the game the way they wanted to, but righted the ship as senior Shanysee Alexander had a game-high 14 points and Tsion Smith (13) and Alyssa Hawes (10) also finished in double figures. Guard Katara Roman had a team-high 11 points for the Knights.

City (4-2) build a 10-5 advantage before the Cougars locked in on both sides of the court in a 19-2 run.Smith buried two three-pointers during the run and Alexander made two jumpers just outside the free throw line to help the Cougars seize control.

The Old Eastern Avenue school maintained a double-digit lead for the rest of the game. The Cougars (5-10) will take on No. 4 Howard this Saturday at the Public vs. Private Challenge at McDonogh School before returning to IAAM B Conference play.

“We have a played a tough schedule and that is by design, now it is time to win the conference,” said Mount Carmel coach Rob Long, whose team reached the IAAM B semifinals last season. “It’s time to get things together and see what kind of program we have. We got big fish to fry.”

With Poly Friday at Morgan and eighth-ranked McDonogh Saturday at the Public vs. Private Challenge, Pikesville gained some needed momentum with a hard fought decision over Coppin Academy.

“We just need to cut on the turnovers and finish better,” Pikesville coach Michael Dukes said. “But I am really happy that the girls were able to buckle down, especially down the stretch.

Leading by two points with 5.9 seconds Pikesville guard Nakiya Bland was fouled, and missed the front end of the one-an-one. The ball rolled off the right side of the rim and into the hands of Coppin Academy’s center Aniya Hills (10 points)

Hills was immediately fouled and put on the foul line for the double bonus, but missed both attempts. Kristin Sterling got the rebound and was fouled. She made both foul shots to seal the win for the defending Baltimore County league champ Panthers.

Loyola University recruit Charia Roberts and Tyra Robinson and each recorded 10 points for Pikesville (6-1). Kayla Henderson had 12 points for Coppin Academy (6-4), which missed eight free throws in the final quarter.

“This was kind of rivalry game for us,” Dukes said. “The girls were looking forward to this one and they played well.”

Sterling, who will play for North Carolina A&T next season, scored six of her team-high 12 points in the fourth. Tied at 12 after one, Pikesville went on a 10-1 run behind Robinson, Roberts and Sterling to help build a nine-point advantage.

The Eagles ripped off a 6-0 run to bring the game within one possession, but the West Baltimore school never led again Jayln Richardson’s layup made it 9-7 in the opening quarter.

The Poly-Pikesville match (5:40 scheduled tip) is the only girls match on the slate Friday at the Basketball Academy. Coppin Academy and City open the final day of the Academy, Saturday at noon.