Not to be denied 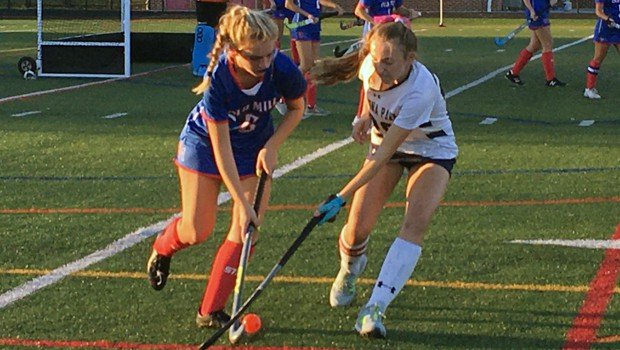 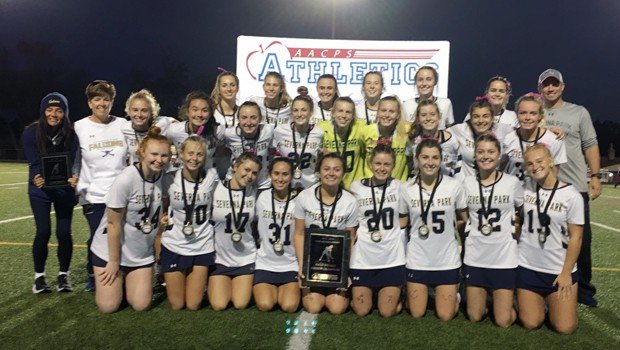 by Nelson Coffin
No. 3 Severna Park’s quest to add to its state-record 25 state field hockey titles will begin in earnest in the Class 4A East Region 1 playoffs next week.
On Wednesday afternoon, the Falcons made sure that they will enter the postseason with plenty of momentum by beating stubborn Old Mill, 2-0, in the Anne Arundel County championship match at Glen Burnie High School.
The rivals are on a collision course to meet again in the regional final after gaining byes into the semifinal round.
Severna Park is slated to meet Meade in one semifinal while Old Mill will tangle with Glen Burnie on the other side of the bracket.
Although the Falcons (12-2 overall, 10-1 Anne Arundel County) were heavily favored to retain their county laurels, the unranked Patriots (9-4, 9-3) used a bend-but-don’t-break defense to great effect despite yielding five penalty corners in the first quarter.
Nevertheless, the defending state champs still could not get a shot past Old Mill junior goalie Regan Gardner (5 saves).
Gardner’s best save of the game came with 1:35 left in the opening period when she denied junior midfielder Ava Drexler-Amey’s wicked drive.
Old Mill was able to keep the game scoreless throughout the second quarter as well, with midfielder Tori Martz and fellow freshman Riley Kellner, a busy defender who broke up several potential Severna Park scoring opportunities, leading the charge.
“Tori never gives up,” Old Mill coach Courtney Rice said. “She’s been doing that all season. And Riley played her best game of the year.”
The Falcons finally broke through when Delanie Abere scored on an assist from fellow senior forward Danielle Bonk in the middle of a scrum with 6:46 remaining in the third quarter.
The Falcons notched their second goal after time expired in the period on a penalty corner when senior midfielder Katelyn Haufe swiped the ball into the back of the cage and Drexler-Amey assisted.
“They packed it in and we tried to draw them out with transfers on the perimeter,” Severna Park coach Shannon Garden said. “We needed less dribbling and more passing. It’s like we were knocking at the door, knocking at the door and then finally opened the door. We just had to keep trying. We needed less dribbling and more passing. And then we just got a lucky touch — but that’s all it took.”
Garden said that her team’s tough schedule has it well prepared for what lies ahead.
The Falcons’ only league loss came against Anne Arundel County rival and No. 10 Broadneck, 2-1, in double overtime on Oct. 12. Severna Park won the first meeting in September, 2-0.
They have also defeated No. 9 Crofton, No. 17 South River, Arundel, and Chesapeake.
“Oh gosh, it really has gotten us ready,” Garden said. “I think playing that kind of schedule … helped us just learn to dig deep. Those games (against Chicago’s New Trier High School and New Jersey’s Kingsway Regional High School at the MAX Field Hockey Tournament), they were no joke. Every team there was so good and I think it gives us a confidence boost to play those games, No. 1, and, No. 2, it helps just getting the experience of playing really good games out of conference. I went for those games. I actually contacted all kinds of folks to play… I didn’t care if we’d lose. I just wanted the experience.”
Other non-league games, including a 2-1 double-overtime victory over No. 1 Garrison Forest, the 2019 IAAM A Conference champion, have made the Falcons an unflinching opponent with a 6-2 record in one-goal games.
Senior midfielder Gen Mullervy, who was knocked out of the game with a nasty cut above her right eye with just over 14 minutes remaining in regulation, is a perfect example of Seven Park’s grit.
Mullervy sprawled on the turf for a brief time before walking off the field with blood streaming down her face — yet she remained perfectly composed.
Garden and one of her assistants, Ben Pardew, noted that Mullervy’s stoic courage is unquestioned.
“She a very tough competitor,” Garden said. “Yet she’s also a very quiet competitor.”
The Patriots also deserve some credit for providing stiff resistance on Wednesday.
“We never gave up,” Rice said. “When we did get beat on a play, we told the girls to keep focusing on the next step. We played with Severna Park the whole game.”
The Falcons’ defense, though, was its usual stingy self, allowing very few chances to threaten junior goalie Charlotte Kramer (4 saves) after Martz whistled a shot that was turned away midway through the opening period
“There was a lot of communication after we started a little slow,” she said. “But our center-midfielder (senior) Zoe Day calmed things down for us.”
Pictured above: Old Mill junior forward Sam Sobolewski (left) and Severna Park senior midfielder Emma Marsh battle for possession in the Anne Arundel County Field Hockey Championship Game, Wednesday at Glen Burnie High School. The No. 3 Falcons won on a pair of third quarter goals.
2021 ANNE ARUNDEL COUNTY FIELD HOCKEY CHAMPIONSHIP
(at Glen Burnie High High School)
NO. 3 SEVERNA PARK 2, OLD MILL 0
OLD MILL 0 0 0 0 — 0
SEVERNA PARK 0 0 2 0 — 2
GOALS: SP-Delanie Abere, Katelyn Haufe.
ASSISTS: SP-Danielle Bonk, Ava Drexler-Amey.
SAVES: OM-Regan Gardner 5; SP-Charlotte Kramer 4.