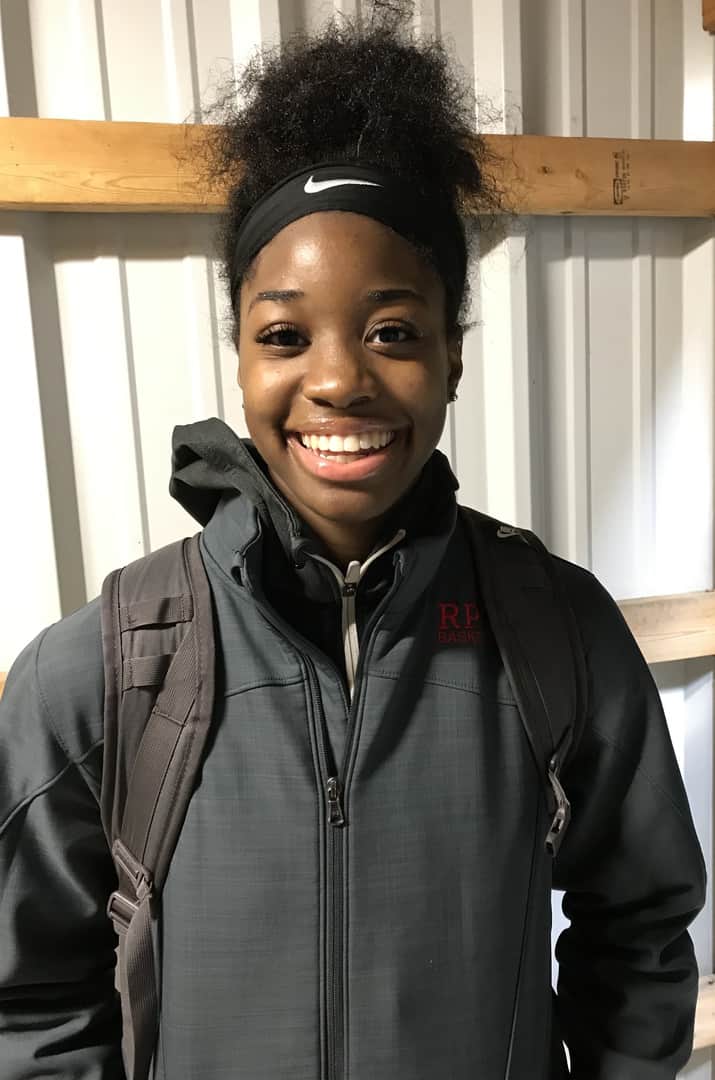 Mir McLean was again dominant for Roland Park Country basketball Tuesday. The McDonald’s All-American scored 28 points and pulled down 18 rebounds as the No. 7 Reds defeated sixth-ranked St. John’s Catholic Prep in an IAAM A Conference quarterfinal in Frederick.

The third time was the charm for Roland Park Country School basketball. The seventh-ranked Reds defeated No. 6 St. John’s Catholic Prep, 56-54, in the quarterfinals of the IAAM A Conference tournament in Frederick.

Mir McLean posted 28 points and 18 rebounds for the fifth-seeded Reds (15-10 overall), who will play top-seed and top-ranked St. Frances Academy in a semifinal Thursday in East Baltimore. Kayla Cooper and Jasmine McNeill each scored 17 points for St. John’s Catholic (15-8).

A couple of big basketball moments await McLean in the next few months, playing in the McDonald’s All-America game and joining UConn’s storied program. Tuesday night, however, McLean remained firmly focused on the present, not yet ready to leave her high school career behind.

The Reds dropped their two regular-season games to St. John’s by an average of 22 points. McLean, a 5-foot-11 wing, missed the second meeting for a family emergency, but she said the two losses didn’t matter heading into the playoffs.

“We really had nothing to lose,” McLean said. “We were all confident we could try to win. We had an extra chip on our shoulders, because we did lose twice, so we just stuck to we have nothing lose and we trusted each other.”

In December, St. John’s beat Roland Park by 31 points, but the Reds closed the gap to 13 in January without McLean. The teams finished with identical conference records, 8-6, but St. John’s earned the higher seed based on the two head-to-head wins.

Tuesday, the Reds broke out of 9-9 tie late in the first quarter with nine straight points and the Vikings had to play catch up the rest of the game. Every time they got close, Roland Park would pull away just enough to hold them off at the end.

“It’s hard to beat a team three times,” St. John’s first-year coach Maddie McConnell said. “We did our job the first two times to beat them and then it seemed like we weren’t clicking and running on all four cylinders (Tuesday).”

McLean had a lot to do with that. The 5-11 senior, rated the No. 3 wing in the country in ESPNW’s Top 100, proved a tough matchup for the Vikings, who collapsed multiple players on her in the paint but could not stop her dominance on the boards.

“She’s a really athletic player,” said St. John’s senior Kayla Cooper. “She’s really quick off the (re)bounds, so we had to be disciplined and keep our hands straight up and not foul her.”

McLean scored 14 of the Reds’ first 18 points, but probably her biggest play came late in the third quarter.

The Vikings, on a 6-2 run, had cut the lead to 35-32 when McLean stole the inbound pass, hit the layup and was fouled. Her three-point play boosted the lead to five with 36 seconds left in third quarter.

“What a heads-up play,” said Reds coach Dani Steinbach. “The momentum swing when that happened was huge. Just a very intelligent play. Not something that her coach drew up, that’s for sure. She just has a natural instinct to make plays like that.”

The Reds kept rolling in the fourth quarter. Gabby Franks hit a follow shot and Cameron Levine nailed a 3-pointer to spark a 12-7 Reds run. They took their biggest lead of the game, 50-39, on Sophia Diehl’s 3-pointer with 2:03 to go.

St.John’s, however responded, finding holes in Roland Park’s defense on the inside and attacking the basket. The Vikings also converted two turnovers.

Cooper, who finished with 17 points, scored seven in the final 1:27, two inside buckets and a 3-pointer. Jalyn McNeill, who also scored 17, hit two layups.

The Reds kept pace from the free throw line. The Vikings kept fouling and kept Roland Park from taking any shots after Diehl’s 3-pointer at 2:03.

McLean, Myah Simmons and Diehl combined for six free throws down the stretch to keep the Reds in the lead. McLean hit both ends of the double bonus with 12.4 seconds left to give the Reds a 56-52 lead, enough to hold off the Vikings despite Jasmine Lindsey’s final basket.

In Thursday’s semifinal, the Reds face a rematch of last year’s title game at top-seeded St. Frances. The four-time defending champion Panthers advance after IND, which had just one A Conference win this season, forfeited the quarterfinal game.