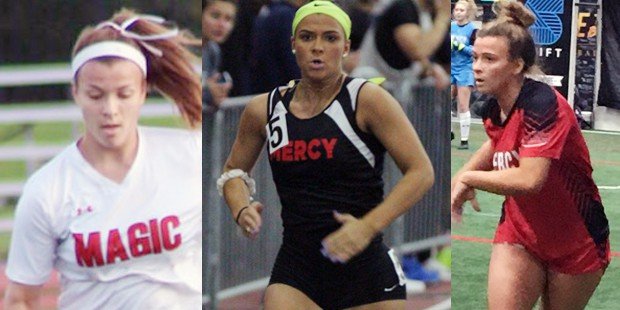 Until the winter sports season, Ada Clare Tempert never realized that the simple act of running could be so complicated.

To be fair, it’s not really the ability to sprint in stride that somewhat befuddled the Mercy High School senior.

It’s settling in the starting blocks to compete for the Magic’s indoor track squad in either the 55-meter or 300-meter sprints that tested her mettle while trying a sport for the first time.

As a highly decorated veteran of four seasons of varsity soccer and three season each of varsity basketball and lacrosse already under her belt, Tempert is used to motoring at top speed.

Yet there’s a difference between just plain running and mastering the technique needed to get a proper start in sprints.

“There’s a certain way you have to do it,” Tempert said about the three phases of settling in the blocks — alignment, set and start. “When I come to the track, I still struggle with it. People don’t understand how hard it is. There are a lot of terms I had never heard of.”

Considering her athleticism and determination, however, Tempert found a work-around that allowed her to be compete at a high level..

“She has such strong legs that she can somewhat make up for not starting in the blocks,” Mercy indoor track coach Eric Coles said. “And she has the speed and the sheer will and competitive desire to do it. She loves to run.”

At least Tempert didn’t have to worry about the correct starting technique as a member of the Magic’s 4X200 relay that finished fifth at the championship meet in 1:58.60.

Even so, the Loyola University Maryland soccer commit had to figure out another tricky track protocol required of the anchor position — how to correctly complete a baton exchange while on the dead run.

These and other issues regarding the sport are things that have tested Tempert’s athletic aptitude, and she is passing with flying colors.

“Once she masters a technique, the sky’s the limit for her,” Coles added. “Because everything’s so new to her, she’s just been soaking it all in. It’s been really nice to see and I look forward to seeing her development this spring (in outdoor track).”

Meanwhile, her first foray into indoor soccer this winter is reaping dividends for the defending IAAM A Conference champions.

After leading the Magic outdoor soccer team to a 14-5 record and an A Conference semifinal berth while scoring 28 goals and adding 10 assists last fall, the program’s all-time leading scorer (88 goals, 40 assists) is also pacing the undefeated Magic indoor squad with 19 goals and 12 assists in just six games so far this season.

Neither indoor soccer coach Nick Gill nor Coles had a problem with Tempert splitting time between the two sports in the same season, a feat she plans to repeat this spring with lacrosse and outdoor track.

“I thought if Nick was willing to part with her a couple of days, I was fine with it,” Coles said.

Gill knew what he was getting when Tempert decided to bring her game inside.

“The whole idea behind her running for the track team and playing indoor is to help prepare her to play (soccer) at the next level,” Gill said. “I just talked to Eric to make sure that it made sense for everyone.”

There were very few conflicts between games and meets, and with the indoor track season over, she’s now free to get back to her soccer roots until the season concludes Feb. 9 if the Magic, which just locked up the top seed in the playoffs, advance that far.

Tempert said that playing the indoor version of soccer did not always appeal to her.

“In the beginning, I was not a fan (of indoor soccer), she said. “Then I started to look toward the future. Playing indoor would really help with technical skills and working in tight spaces. And running the 300 in track has really helped (with stamina). I’m glad I gave (indoor soccer) a chance.”

In order to play soccer in the winter, she had to forsake basketball after three winters spent on the hardwood.

Tempert decided to make a change, and not because new coach (and Mercy legend Mary Ella Marion) is returning to run the hoops program.

With a new coaching staff in place, it was the perfect time for her to try something new.

“It’s one of the best decisions I’ve ever made,” she said. “It’s good for the basketball program to start fresh.”

Yet the hoop team would undoubtedly be stronger with Tempert, whose eight points led the Magic in a 39-30 setback to archival Institute of Notre Dame in the 52nd Big Game in front of a packed house at Towson University’s SECU Arena last February.

As much as Tempert will miss basketball, the once frowned-upon notion of playing indoor soccer had become more alluring.

Gill calls Tempert a dominant post-up forward whose skill strength and speed are perfect for the sport.

“What her playing indoor has really brought out is her vision,” he said. “It’s really put a focus on her passing. She’s just as dangerous as a passer as she is as a scorer.”

In addition to track and field in the spring, her final year playing lacrosse for the two-time defending IAAM B Conference champs is another adventure Tempert will continue.

“Lacrosse is always something I’ve done for fun,” Tempert said. “I don’t have the best stick skills, but I love to get the ball in my stick and move (forward). I can help the team sometimes by just running the ball to clear.”

Mercy lacrosse coach Brian Casserly said that when Tempert does control the ball, just like in soccer, the midfielder will either find an open teammate or take aim at the goal herself.

“Her field vision is just so good,” said Casserly, who has guided the Magic to four consecutive B Conference title games. “And she has a cannon shot.”

In the 2017 B Conference final against Friends during a critical juncture in the game, Tempert won back-to-back draws and raced downfield to score a pair of key goals.

“She can basically eliminate the other team’s top scorer,” he said. “There’s nobody else athletic enough in the B Conference to get away from her.”

Tempert’s formidable three-year career totals add up to 66 goals, 39 assists, 110 draw controls, 136 ground balls and 42 caused turnovers for a program that has won 36 of 43 games during that span.

Practicing and playing aren’t the only endeavors Tempert tackles during busy school days that usually start at 6 a.m.

She also holds down a part-time job as a waitress at Zen West restaurant, does core workouts and agility drills, lifts weights and practices with her Pipeline club soccer team before doing homework.

“There aren’t a lot of kids who give 100 percent all the time,” Casserly said. “But Ada get it. She knows what maximum effort is. She’s just a phenomenal and smart athlete. If she committed to just play lacrosse, there’s no question that she could play for a high-end D I program.”