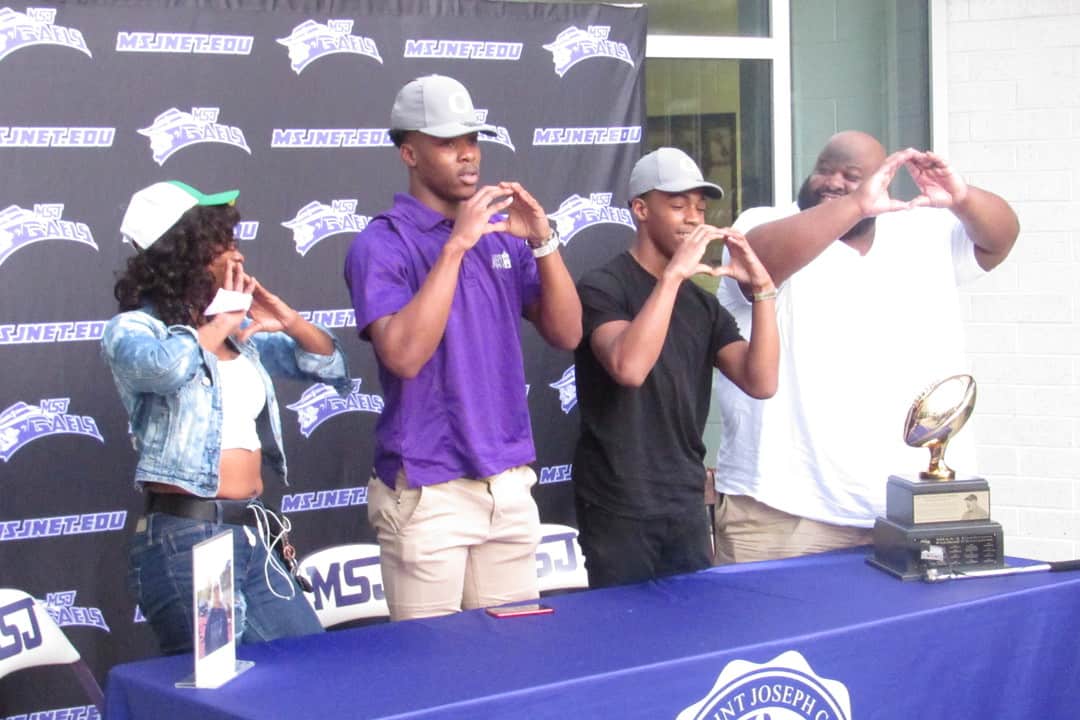 Mount St. Joseph wide receiver Dont’e Thornton Jr. (second from left) makes an O-sign with mother Taria Felder (left), brother Dont’e Thornton and uncle Faschall Grade after announcing his commitment to the University of Oregon Tuesday evening outside of The Smith Center in Southwest Baltimore. Thornton is the area’s top senior prospect and nation’s No. 6 wideout by Rivals.com

Dont’e Thornton said he’s been a fan of University of Oregon football since he was five years old. So when the Pac-12 Conference program offered a scholarship to the Mount St. Joseph wide receiver last year, it was widely believed it would be a matter of when Thornton would pledge to the Ducks.

Tuesday evening, outside of The Smith Center in Irvington, Thornton, the area’s No. 1 senior prospect, announced his commitment to the Ducks.

“I loved the Ducks since playing NCAA Football,” said Thornton referring to the video game. “They have the best uniforms.”

The all-star exhibition which takes place in San Antonio in January, was cancelled late Tuesday afternoon because of the Covid-19 pandemic.

Thornton, 6-foot-5, 205-pounds, had 42 catches for 1,042 yards and scored 16 touchdowns last year for the Gaels, who won the MIAA A Conference title. He had 51 catches for 960 yards as a sophomore, earning All-MIAA A and All-Metro first-team honors.

“When you have a highly recruited kid you worry about their head getting too big, but never had to worry about that with Dont’e,” said Holzer, who stepped down as Gaels coach earlier this year to become coach at Northern of Calvert County. “He has a very good head on his shoulders. He has very good grades and was voted Class President which says a lot about how much your classmates and teammates respect you.

They’re (Oregon} getting an extremely dynamic kid on the outside. He’s extremely fast and has great hands. He’s learned to not to be afraid and make tough catches across the middle.”

Thornton attended Oregon’s camp in the summer of 2019 and received an offer. Though he entertained dozen of other offers, Thornton’s heart was with the Ducks.

“Once the opportunity was offered from Oregon, I knew that’s where I wanted to be at,” said Thornton, who plans to graduate in December and enrolled at Oregon for spring semester, and take part in the 2021 spring practice.

Sporting an Oregon hoodie and hat, David said he’s excited about hopefully starting a Baltimore pipeline to the Great Northwest with Thornton.

“A lot of people look at Baltimore negatively, but we want to change that,” said David. “You can get great players from Baltimore to go anywhere and show out. That’s our main goal.”

“Everyone overlooks Baltimore, when they talk about Maryland, they talk about the D.C. part,” said Thornton. “It’s a lot of good athletes in the city and I hope a lot of more coaches recruit this area heavy, so we can get more players like us on the next level.”