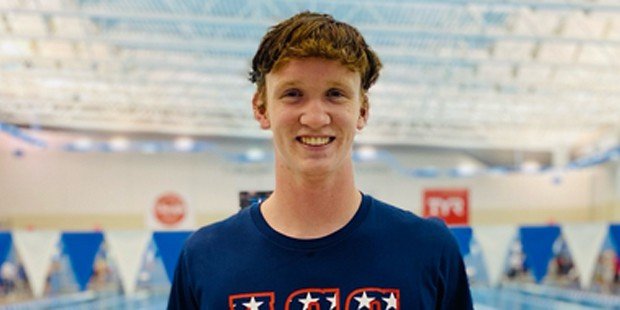 Joe Hayburn is getting the send-off he richly deserves when he leaves for the U.S. Olympic Swimming Trials in Omaha on June 1.

After all, the rising St. Mary’s junior turned in a personal-best 56.58 in the 100-meter backstroke at the Speedo Sectionals in mid-May to qualify for the U.S. Olympic Swimming Trials in Omaha beginning June 4.

Hayburn said that he “had some nerves” going into the race until he saw his Annapolis Swim Club teammates cheering him on with “GO JOE!!” painted on their chests.

“That totally changed my mind-set,” he said. “I knew that it was my moment.”

And not a moment too soon, considering that the Trials cut time was 56.59 and he had only .01 of a second to spare in order to earn a berth in the country’s most prestigious swimming competition.

That’s pretty heady stuff for a 17-year-old, even though he has already been mentioned in the same sentence with the most highly decorated swimmer in the history of the sport when he broke Michael Phelps’ state 13-14 age-group record in the 200 backstroke.

Even so, he had to perform under tremendous pressure to qualify for the Trials.

Hayburn said that when he made his turn and came off the wall on the long-course pool in Richmond, he remembered thinking “that felt pretty good.”

He still had a long way to go.

His Mom, Teri, who swam at Villanova, was not surprised by the emotional lift her son felt at the meet.

“I knew he was on target because he was so powerful coming off the wall,” she said. “That was the best thing his teammates could have done for him. He always feeds off that kind of energy and gets caught up in the camaraderie. The key for him is having fun and keeping the love of the sport.”

Coming from a swimming family — older siblings Annie and Jimmy swam for the Saints before swimming for Loyola University and little brother Luke is also an upcoming St. Mary’s swimmer — has certainly helped this no ordinary Joe achieve success.

That said, in an individual sport like swimming, you’re on your own — to sink or swim.

Hayburn gave a glimpse of what type of high school swimmer he will be from the 2020 MIAA championship meet.

“Joe joined our team last year, our debut year in the A Conference,” St. Mary’s coach Allyson Reiter said. “Joining an already talented team, Joe added and aided our legitimacy and additionally added music and laughs to our team atmosphere.”

His club coach sees Hayburn in a similar light.

“Joe is well balanced because he’s easy going but also super competitive,” Annapolis Swim Club coach Stephen Henderson said. “I was coaching another club team when I first saw him, and even from a distance I could see he was an elite-caliber athlete. He just has an easy way with the water.”

Henderson was confident that Hayburn would find a way to qualify for the Trials.

“He set his own personal standard so high,” he added. “I knew he could do it, he just had to execute. But I never saw his look so strong as he did on the final 50 meters that night.”

Simply spending time in the same venue in Omaha with world-class athletes should only make Hayburn better.

“It will be an honor to compete against the top swimmers in the country,” Haburn said. “I just want to enjoy every moment.”

“The goal was to qualify,” Henderson said. “We’re thrilled to be going to the Olympic Trials. That’s an honor and a unique experience for a 17-year-old.”

“Joe’s participation in the trials is a source of great pride, not just for our team, but for our whole school, because of how Joe and all his strengths represent the St. Mary’s community,” Reiter added.

Pictured above: St. Mary’s swimmer Joe Hayburn, who has qualified for the U.S. Swimming Olympic Trials in Omaha, Nebraska.