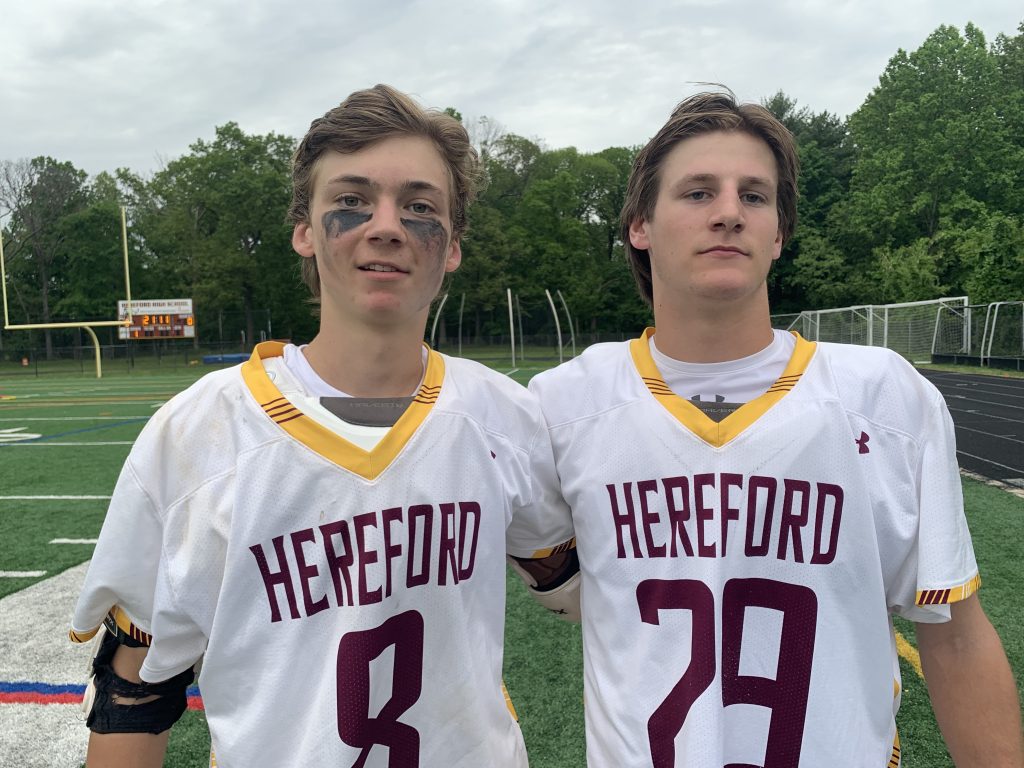 James Traynor (left) and Austin Clarke helped Hereford boys lacrosse secure another state semifinal berth Wednesday. Traynor scored three goals and Clarke was a part of defensive effort that stymied Glenelg as the No. 13 Bulls advanced to the 2A state final four with a 14-3 victory in Parkton.

Hereford High boys lacrosse didn’t want a repeat of its slow start in last year’s Class 2A state playoffs with Glenelg for its rematch with Gladiators Wednesday.

The defending state champ and 13th-ranked Bulls were engaged from the opening faceoff, dismantling the Gladiators, 14-3, in Parkton for a return trip to the state semifinals. James Traynor and Baylor Davis each scored three goals for Hereford (13-3 overall).

The Bulls stampede to their record-tying 10th title last year was sparked by its 13-12 state semifinal victory at Glenelg. They trailed 6-1 after one and 7-3 halftime.

“We really got off to a great start with faceoffs which really sets a nice tone,” said Leppert, complimenting the X-play of sophomore Cole Wallner and junior Matthew Daw. “You’re controlling the pace and settling in offensively early on and the defense was spot on from the start.”

“We’ve been building up to this all year,” said Bulls longstick defender Austin Clarke.

Traynor had a first quarter hat trick, and Davis, Trey Gibbons, Brenden Kittner and JP Revitte each tallied as Hereford secured a 7-0 advantage within the first 15 minutes of regulation. The Gladiators got the final two tallies, giving the Howard County school some hope at halftime.

Hereford succinctly crushed those aspirations midway through the third. Gibbons intercepted a pass, went to goal and scored. Senior midfielder Mac Tiller started a transition with an interception, and Revitte finished for a 10-3 advantage with 5:13 left in the third.

After a shot went off Glenelg goalie Blake Hunter, Dillon Bakhsh got the loose ball and fired it into the net, making it 11-3 late in the third.  Revitte tallied twice with two assists, and.Gibbons finished with two goals and an assist and

Traynor said the effort against Glenelg, a team the Bulls have crossed paths several times in the postseason over the last 10 years, was promising.

“We know they’re a really good team so I feel like that’s going to really set us up well to continue our playoff run,” said Traynor.

“They’re very good at defense,” said Glenelg coach Josh Hatmaker. “We thought we would have success against them, but they play a really good style and they started fast.”

Next for Hereford is another familiar opponent in Kent Island, which the Bulls held off, 5-4, in last year’s final at Ridley Athletic Complex. The Stevensville school ended Hereford’s run of six straight state titles in 2014.

“At times it feels like March 1 is years behind us then other times I don’t want this to end, it doesn’t feel like we have long enough to work on some things,” said Leppert. “To be back there (in state semifinals) is great and the matchups we have ahead is a tall task. It’s exciting to give them that challenge.”