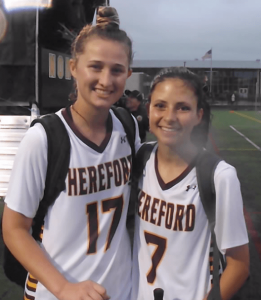 Isabella Peterson (left) and Libby May combined for eight goals in Hereford’s victory over No. 14 Century in a Class 2A state girls’ lacrosse semifinal Friday evening at Northeast. The Bulls will play No. 3 Glenelg or Kent Island for the state championship next week at Stevenson University.

The rain and gusty wind couldn’t slow down Hereford High lacrosse Friday evening at Northeast as it swept in the Class 2A state semifinals Friday evening. The Bull girls routed Century, 15-4, and the boys blew out Montgomery County’s Damascus, 13-3.

The No. 12 Hereford girls came up with one of its best performances of the year, leading wire-to-wire against 17th-ranked Century. The Bulls were faster and more aggressive against a Knight team that won the 2A/1A crown a year ago.

“I really don’t think it rained enough,” Hereford coach Anne Ensor said. “The girls really played one of their best games they played all season. And the timing couldn’t have been better.”

Hereford (15-1 overall) will face No. 3 Glenelg or Kent Island in the state title game, next week at Stevenson University. The Baltimore County champions will be looking to win its first state title since 2003.

Hereford’s Isabella Peterson and junior Libby May have built a chemistry on the field and it was apparent throughout the match Friday. May, who’s verbally committed to the University of Maryland, had four goals and three assists, while Peterson finished with four goals and two assists.

“We have been working on getting better for a while and it was great that we are able to play really well in this game,” May said.

“To get to this point and know that we get to play one more game together is a great feeling,” the James Madison-bound Peterson added.

Kylie Nause and Katie Blair each had four goals apiece for the Bulls.

Hereford set the tone early as May dealt out an assist to Peterson, 30 seconds into regulation. The Baltimore County school tacked on another goal 55 seconds later, followed with scores from May and Peterson, giving the Bulls a 4-0 lead with 18 minutes left in the first half.

The Knights (12-5) didn’t get their first shot on goal until the 17th minute on a free position. The shot sailed high.

The Carroll County school struggled against the elements and Hereford’s swarming defense. The Bulls’ effort was spearheaded by Rachel Saunders  who forced five turnovers and secured three ground balls in the game.

“Everything was moving very well tonight,” Ensor said. “If we put together one more performance like this next week, I really like our chances.

The Bulls expanded the lead to 8-0 with two scores from Peterson and Nause before Century finally got on the board with a tally from Christina Haspert (assisted by Demma Hall) with 6:30 remaining in the opening half. Hereford quickly answered with Katie Blair’s tally giving it a 9-1 halftime advantage.

“We were really locked in from the start of the game, we knew what was a stake and we just had to go out and leave all on the field,” May said.

Nause, Blair and May scored in a 4-0 second half run that started a running clock.

“Hereford just showed how good of a team they were tonight,” Century coach Becky Groves said. “I thought they were faster, more athletic, and better lacrosse players today. I thought we did a good job fighting back, but they’re really good.”

For the first time since 2014, Hereford will play for a boys’ state lacrosse championship. The No. 8 Bulls topped Montgomery County’s Damascus in a 2A state semifinal contest at Northeast in Anne Arundel County.

The fourth time was the charm for the Bull boys who lost in the state semifinal round the previous three seasons. Senior JD Nozemack scored five goals and added three assists for the Baltimore County champions.

After watching another masterful performance from his Monmouth-bound attack, Hereford coach Sal Picataggi was melancholy.

“I’m sad that I have only one more game left with him and it’s the biggest one,” Picataggi said. “JD is definitely one of our leaders and he’s one of our captains and he’s our offensive go-to, but you know he makes everyone around him better.”

Grafton Griffey added three goals and Harry Traynor and Gavin Schatall had two each for the Parkton school (17-2), which will play No. 14 Marriotts Ridge or Kent Island for the state title next week at Stevenson University.

Faceoff specialist Connor Dunay won 15 of 21 faceoffs for the Bulls who never trailed against the Hornets. Hereford exploded in the second quarter with eight goals and Nozemack was involved in five of them, with three goals and two assists.

“The middies were finding me and I was able to come around,” Nozemack said. “In the first quarter I had a little trouble finishing, but in the second quarter I was able to start finishing.”

Less than two minutes later Nozemack weaved and spun through three defenders and scored falling down, making it 6-0.

The Bulls, winners of 12 state championships, expect a tougher challenge next week in the final.

“Whoever we play from the other side is going to be a great game, Marriotts Ridge is awesome and Kent Island is great, so it’s going to be about us playing our game plan and our execution and when we’ve done that all year we’ve come out on top,” Nozemack said. “We play our game, we feel good that we are going to be in good shape in that game.”

“These guys have been around,” Picataggi said. “This senior group, a bunch of them have been starting for me for three or four years and I’m glad we got to this point now and we are not just happy to be there.” 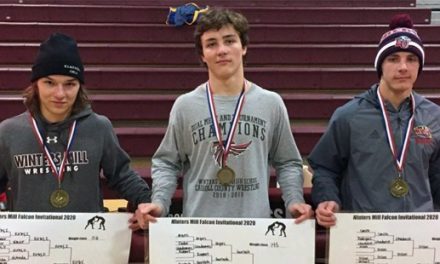