No. 8 River Hill exposes Atholton to a higher level 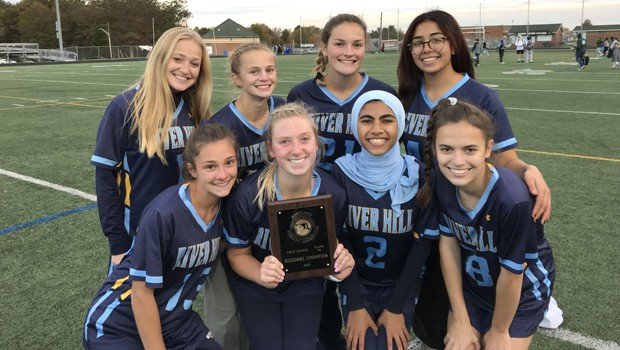 No. 7 Raiders had now answers against the battle-tested Hawks

Atholton went into Wednesday afternoon’s Class 3A East Region II championship as the only undefeated field hockey team in the Baltimore area, but the Raiders hadn’t played a team quite like River Hill.

The No. 7 Raiders competed in Howard County’s B Division while No. 8 River Hill played in the A Division and was runner-up in the county championship. The difference showed immediately.

From the opening whistle, the Hawks dominated en route to a 7-1 victory. They led 5-0 at the half and Atholton (12-1) hadn’t managed a single shot.

After playing a much tougher schedule, the Hawks (13-3) were battle-tested, recovering from their loss in the county final to win a regional championship to match the one they earned in 2019.

“It feels amazing,” said River Hill junior midfielder Puja Nanjappa. “All I’m thinking about is freshman year and how it felt freshman year and it’s just another amazing, amazing feeling. It was really depressing not getting our season last year (because COVID-19 canceled the fall season and state championship).”

“And we had a strong team last year,” added teammate Maddie Vasilios, also a junior midfielder.

The Hawks, who won their only state title in 2010, will play in the state quarterfinals Friday or Saturday. The eight advancing teams will be reseeded according to their records with four highest seeds hosting the quarterfinal games.

Wednesday at top-seeded Atholton, Nanjappa and Vasilios scored first-quarter goals and finished with three points each to lead the Hawks, who made it to the state semifinals in 2019.

Atholton coach Martie Dyer talks to her team during a break in the Class 3A East Region II championship game as Bella Konrad and goalie Catherine Steinberg look on. The Raiders finished their season 12-1 after falling to River Hill.

As the season progressed, Vasilios said, the Hawks developed tremendous chemistry. After falling to No. 9 Broadneck, 1-0, in the second game of the season, they won nine straight games before losing two of their next three to No. 4 Glenelg, including the county championship, 5-2.

They rebounded from that loss with a 3-1 win over Reservoir Monday.

“From the very first game to now we’ve grown as a team and it’s all just all gotten so much better,” Vasilios said. “We’ve gotten so much closer on and off the field and I feel like that’s really helped us… to be able to play as hard as we can and beat these teams. We did have two losses to Glenelg, but I feel like those losses really pointed out the weaknesses and things we need to work on, so now we’re working on those things in practice to make us stronger in the playoffs.”

The Hawks were so dominating in the first half that their goalie, Jocelyn Baker, never touched the ball. They had eight penalty corners and took 16 shots.

Atholton had allowed just four goals all season — and never more than one in a single game — but it took River Hill less than 21 minutes to score four. Slade’s goal on a feed from Carolyn Dzuback gave the Hawks a 4-0 lead with 6:26 left in the first half. Vasilios scored on a penalty stroke less than four minutes later to make it 5-0.

The Raiders, who had scored at least six goals in every game, struggled to get the ball past midfield in the first half but did a better job in the second half.

Less than three minutes into the half, the Raiders finally broke through as Bella Konrad scored on her team’s first shot of the game. They had a few more chances, but Hawks’ back-up keeper Zahra Safiq made two of her three saves in the quarter.

In the regional semifinal, the Raiders rolled past Long Reach, 10-0, and Atholton coach Martie Dyer said it took her team a while to adjust to River Hill’s level of play.

“We’re not used to that and my goalie’s not used to getting peppered like that,” Dyer said of the first half. “I’m just really proud of the girls. I’m glad they scored on them and got a couple corners and got some shots off. I’m so proud of them.”

Dyer, who led the Raiders to the state championship in 2012, especially praised sophomore goalie Catherine Steinberg, who finished with 11 saves.

For Konrad, the loss was disappointing but could not take away from the tremendous success of the Raiders’ season as a whole.

“I’m really happy with the season,” said Konrad, a junior forward. “Even though we lost, I think we all played really hard, some of the best we played and I’m sure next season will be great.”