Undefeated Magic has clear path to top seed in IAAM B2 basketball with win over No. 20 Falcons (VIDEO HERE!) 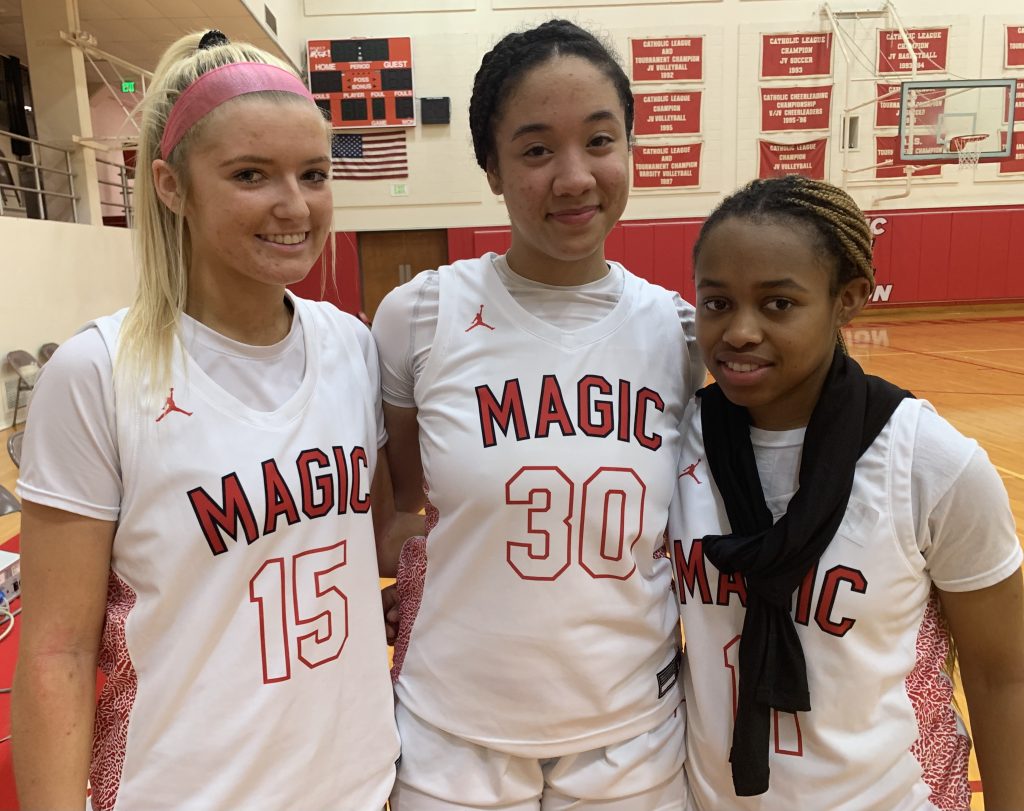 Two weeks ago, Mercy High’s girls basketball team slipped past Gerstell Academy by just two points, so the rush of adrenaline experienced by both teams in Wednesday night’s rematch could have been expected.

Both teams got off to a frenetic but low-scoring start. They struggled offensively but kept the score close. Neither team ever led by more than six points.

Despite not scoring a point in the first quarter, the No. 8 Magic pulled out another close victory, 41-40, in the showdown of the top two teams in the IAAM B2 Conference on National Girls and Women in Sports Day.

Mercy (15-0 overall) improved to 11-0 in the conference. With three games left, the Magic likely will have the top-seeded spot when the conference tournament begins in two weeks. Gerstell (10-4, 9-2 IAAM B2) should be the second seed.

Wednesday night, the host Magic flipped a six-point deficit midway through the second quarter into a six-point lead with 2:18 left in the third quarter. Early in the game, stellar freshman point guard Milan Brown and junior forward McKenna Carroll got into foul trouble which continued to stifle Mercy’s offense.

“The key was we were really trying to get the ball in to McKenna more,” said Mercy coach Mary Ella Marion. “We felt like we had an advantage with her inside. We were spacing very well, she had a lot of openings and … she got in foul trouble early so we were not able to get the ball to her, so that helped (to get her back).”

The Falcons cut the lead to one five times in the fourth quarter, but they could not pull even. Brown’s layup with 1:43 to go gave Mercy a 41-38 lead. Lauryn Wargo fed sophomore Eniyah Stinnette for a layup with 40 seconds left, but Jackson, who missed part of the fourth quarter with a leg cramp, tried a desperation shot that Kathrynn Heinz rebounded as time expired.

Gerstell, which got off to a 6-0 start, had a lot of chances at the free-throw line but shot just 8-for-20 throughout the game.

They maintained their six-point edge early as Stinnette’s layup made it 10-4 three minutes into the second quarter. Mercy, however, wiped out that lead in about a minute and a half on a free throw and a follow shot from Brown and a 3-pointer from Taylor Gilmore.

Midway through the third quarter, the Magic took the lead for good thanks to a couple of smart inbound plays from Lauren Panageotou. The junior found Olivia Liszt open under the basket to tie the game and then assisted Anabelle Hafner for a 3-pointer to take a 22-19 lead with 2:59 left in the third quarter.

After struggling offensively early in the game, Liszt said, “During halftime we were talking about passing the ball, making good shots and getting to the basket. We weren’t moving on offense, so we had to [run] our motion offense to get better shots and lots of movement.”

Both teams are enjoying banner seasons, bouncing back from the COVID-shortened season last winter. The Magic had an 11-10 season in 2019-20, but they had struggled with losing seasons for more than a decade before that. They haven’t finished undefeated since the 1974-75 Catholic League championship season when Marion was a junior guard on the team.

Marion said the team doesn’t talk about the possibility, especially with the prospect of another game against the Falcons in the playoffs and with their next opponent, unbeaten and No. 5 Howard in the Public vs. Private Challenge Saturday at 1:30 p.m. at St. Frances Academy.

Each has three conference games left before the tournament and they could play again in the championship on Feb. 21 at Harford Community College.

Gerstell coach Shane Stem said he was happy with his team’s effort as they challenged the Magic for the top spot in the conference.

“We knew that they could go off at any time with their point production with their shooters, with the dynamic players that they have,” he said. “We were just happy to keep it close, have a chance at the end. I think we left too many points at the free throw line, but we’re looking at it as an improvement. We lost by two (60-58) the first time we played them and it was a one-point game tonight, so we’re hoping if we get another crack at them in the playoffs we can get over the hump.”