No. 6 Sparrows Point girls cap a big week with a second win 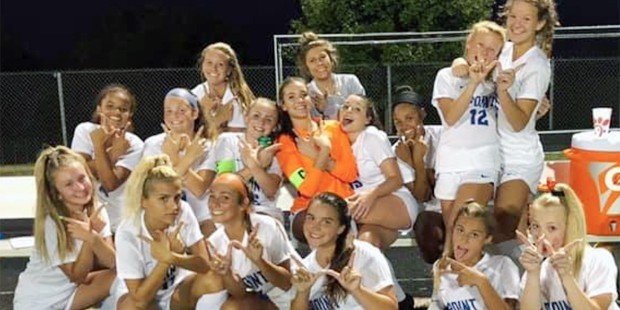 Pointers rally to top No. 18 Hereford in overtime

The Pointers shut out Perry Hall at home, 1-0, on a goal from Elsa Turner assisted by Abby Meadows, and followed that with a come-from-behind, 2-1, overtime victory at No. 18 Hereford, on Thursday

Against the Bulls, Sparrows Point was down a goal, 10 minutes into the second half, but were able to net the equalizer with 18 minutes left when Sara Gruntowicz scored. Alayna Jerome found Gruntowicz on the run and she neatly placed a well struck ball past the keeper into the side netting.

The score was tied 1-1 at the end of regulation. With five minutes left in the first overtime, the Pointers’ Laci Bell was ripped down just outside the 18 yard box. Earning the penalty, she hit a nice free kick around a five-player wall which the keeper batted away. However, the ball landed on the foot of Jade Weir for a volley and game winner into the back of the net.

The Point girls are now 6-1 this year, having allowed only two goals against.