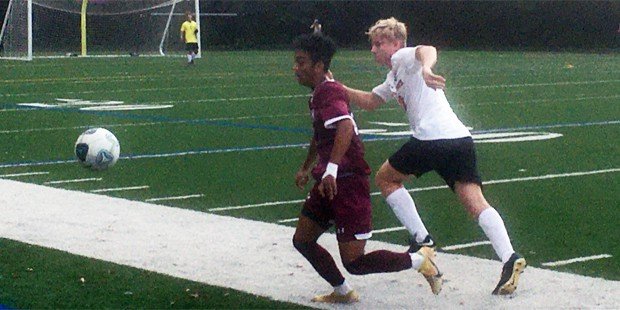 Two of the longest-tenured boys soccer coaches in Baltimore County met for the umpteenth time when No. 5 Towson High hosted Eastern Tech on Thursday afternoon.

Randy Dase’s Generals and Peter Glaudemans’ Mavericks have locked horns many times since Dase took over at his alma mater in the late 1980s and Glaudamans came on board at ET a couple of years later.

The battles are often closely contested, primarily because of the tactical skills of the veterans on the sidelines deploying their troops in the most advantageous position to attack their opponents’ vulnerabilities.

Glaudamans certainly had the upper hand in some big games within the last couple of years, most notably when the Mavericks topped Towson in the 2017 and 2018 county championship games.

Dase and the Generals have recovered quite nicely by capturing the last two county crowns — although neither of them came at the expense of Eastern Tech.

On Thursday, in the head-to-head confrontation between the longtime foes, Dase guided Towson to a sure-footed 4-0 triumph to claim its 12th straight victory and remain unbeaten this season at 5-0.

Towson appeared to be ready for the match, breaking through in the third minute to snatch a 1-0 lead on a goal by sophomore midfielder Jake Del Viscio and then stood tall in the defensive third behind senior right center back Will Derbyshire and senior left center back Eddie Anderson to withstand several thrusts by the Mavericks seeking to equalize.

They never did, thanks to a crushing goal by senior midfielder Koshish Giri early in the second half that gave the Generals a 2-0 advantage and the momentum to make a close match decidedly less competitive.

“We have a very young team and a lot of the seniors didn’t get a lot of playing time last year, so it’s very new and during scrimmages we struggled a little bit,” Derbyshire said. “But every single week we’ve gotten better. We just wanted to do our thing and today was a test. We just came and balled out.”

Giri said that he thought he might have been offside on his first goal on a ball played into him by junior midfielder Jensen Specht.

“The goalie was out of position,” Giri said. “I hit it with my left foot.”

Glaudamans said that the two quick goals to start each half did not “bode well” for his team.

“And being teenagers, sometimes they don’t respond the way you want them to,” he said. “The energy level was there, but the organizational effort as a team really kind of lost itself there when that happened — and we need to find a way to fix that.”

The Giri-Specht combination struck again with 22:24 left in regulation to build a 3-0 cushion that lasted until senior midfielder Nick Elliott closed out the scoring on a feed from sophomore striker Jackson Kanzler with just over five minutes left.

“To beat Eastern Tech, 4-0, that’s pretty tough (to do),” Dase said. “We wanted to play direct, because we have some guys down there who could take care of business. I felt better after the second goal, but then I wanted an odd number — and then another even number. We needed enough to solidify the win.”