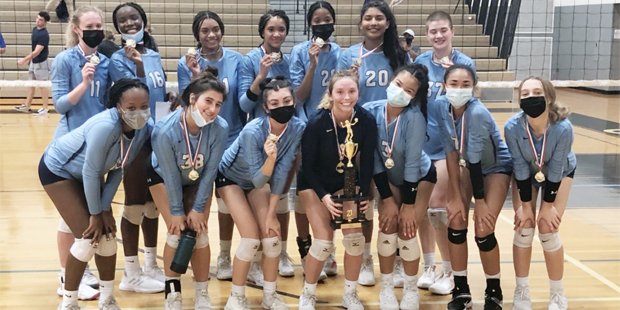 by Katherine Dunn
After defeating Reservoir High in a battle of Howard County volleyball powerhouses last week, No. 5 Howard breezed through the Oakdale Tournament Saturday without dropping a set.
The Lions beat Boonsboro in the best-of-three title match, 25-12, 25-17, and junior outside hitter Kelenna Onukwugha was named Most Valuable Player of the Tournament. Junior outside hitter Corinne Chau and senior setter Ayanna Pharoah were named to the All-Tournament Team.
As they did in beating Reservoir Monday night, the Lions relied on a team effort with strong defense and accurate passing to facilitate their attack.
“So much of it was our team chemistry,” Howard coach Allison McCoy said, “and really finding the energy to be able to dig deep late in the match, because we definitely faced challenges, seeing Oakdale earlier in the semifinal match and just making sure we had the energy to finish.”
The undefeated Lions swept No. 9 Century, Roland Park, Tuscarora and the Maryland School for the Deaf in pool play. In the semifinals, they defeated Oakdale, 27-25, 25-19.
Onukwugha had 22 kills for the tournament.
“Kelenna was the MVP because she was there to put the ball away for us,” McCoy said, “and she was able to swing both line shots and cross court and also did a great job passing. When she’s out on the court, she brings everybody up with her as a team to bring the energy up too.”
Chau and senior middle hitter Tyller Williams had 24 kills each in the match. Chau also had 23 digs and five aces while Williams had seven blocks and seven aces. Pharoah dished out 87 assists and had 12 kills and six aces. Senior libero Briana May had 40 digs and three aces.
“I think, like the Reservoir match, it’s really important that we all stay together,” Onukwugha said, “and we were able to cover each other and be there for each other when not everyone was 100 percent, because I know by the end of the day so many of us were so tired, but it just took one or two of us who had the remaining energy to pick up everyone else.”
With their early success this fall, the Lions are ahead of McCoy’s expectations coming into the first full season in two years.
“It is surprising to see that we’re at this point,” she said. “I feel that one of the unique advantages of having the spring season and then having a team of so many returners, we are playing more like a mid-season team and hoping to keep growing, have more hitting connections than we see already.”
Coming off such a stellar week, Onukwugha said the Lions are keeping it all in perspective.
“We talked at the beginning of the season about looking ahead to state championships which we know is where we want to go,” she said, “but coach McCoy stressed being in the present and focusing in on every little thing, every point and it all adds up. It definitely helps us to have the crowds and have their energy and the excitement of the games now is so much different (than last spring). It helps us to get pumped up and we perform better, because we’re grateful to be playing.”
In pool play, Century finished 4-4 and tied for second with Tuscarora and the Maryland School for the Deaf, but the Knights lost in the playoff to MSD, 25-18.
Roland Park finished 0-8 in the pool, but coach Amanda Eich gave her Reds credit that they “fought through a tough pool.” Setter Grace Daniels had 10 assists, five digs and an ace while hitter Niara Soudan had seven kills, seven digs and two aces.
No. 7 Reservoir competed in the second pool and finished third, at 5-3, against Boonsboro, Oakdale, Walkersville and Easton. The Gators won two sets each from Easton and Walkersville, lost two to Oakdale and split with Boonsboro, but Boonsboro finished 7-1 and Oakdale finished 6-2 to advance to the semifinals.
Joining Howard’s Chau and Pharoah on the All-Tournament Team were Boonsboro’s Alyssa DeWaal and Anna Davis, MSD’s Citrine Lummer and Oakdale’s Elise Smith. Receiving honorable mention were Century’s Eva Brandt, Reservoir’s Samiha Foster, Roland Park’s Daniels, Easton’s Ayden Jiminez, Tuscarora’s Justine Winkler and Walkerville’s Victoria Bessaque.