No. 4 Curley and No. 9 C. Milton Wright play a scoreless draw 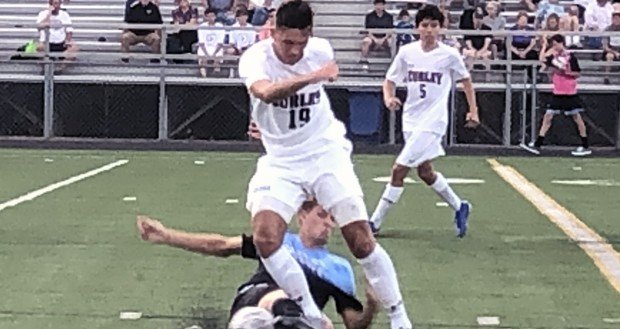 In an excellent Top 10 non-league boys’ soccer match-up, No. 4 Archbishop Curley traveled to Bel Air Tuesday evening to battle No. 9 C. Milton Wright and the two powers played to a scoreless, double-overtime draw.

After seeing their meeting cancelled last year because of extreme heat, the Friars and Mustangs played on a warm but comfortable evening on the CMW turf and featured contrasting styles.

Curley (1-1-1), which likes to play tactical possession soccer, was put off balance a bit by C. Milton Wright’s more physical, attacking approach. Curley controlled large stretches of the action in the first two thirds of the field, but created precious few quality opportunities until late in the contest and overtime.

Wright (1-1-1) created the majority of its chances on counter attacks and had just as many opportunities to a net a game-winner as the Friars.

Six minutes into the game, Curley’s Tyler Harry hit a cross from the right wing, which was headed wide left by teammate Jalen Anderson and, four minutes later, a free kick off the foot of CMW’s Carson James was headed left of the goal.

On a counter run in the 24th minute, the Mustangs’ Ethan Dolezal played a ball through the middle to senior Paul Rose, which forced a sliding save by Curley keeper Chris Denholm. Wright almost struck in the 34th minute when James flicked a ball onto the head of Evan Galant, on the right side of the box, and his header went high. 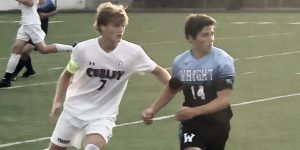 Fourteen-minutes into the second half, Curley’s Bryce Woodward hit a curling pass out to the right side where Justin Karas blasted a shot over the goal. Several minutes later, Curley’s Nick Henderson delivered a corner kick to the head of Kenny Clapp, who triggered a shot to the far post which was saved by Wright’s Zach Hetrick.

The intensity picked up as the contest wound towards the end of regulations and both teams continued to make runs at the goal, with no success to show for their efforts.

Early in the first overtime, Curley’s Nick Lawry hit the crossbar with a long drive from the right side and the Mustangs nearly got a game-winner when Grayson Hichkad placed a dangerous throw into the Curley box, in the final 10 seconds, that sputtered around loose before the Friars finally cleared it. Curley got the best opportunity in the second overtime when Henderson lofted a ball to Woodward in the box. Woodward was one-on-one with Hetrick, but could not get much action on his shot which floated softly into the keeper’s chest.

Both Denholm and Hetrick responded well when tested and each goalkeeper finished with six saves.

Both coaches would have preferred to get a win, but both believe the game will pay dividends for them as their respective seasons proceed.

“We’re happy with the performance,” said C. Milton Wright coach Brian Tully. “We always look at the performance versus result. Obviously, yes we want to win. We go out every time trying to win. We thought we had chances to win that game.

“It didn’t fall today, but we love an early season test like this. Barry coaches them well and they do what they do extrordinarilly well. They make you have to beat them. They are not going to give it to you. So, to get a test like this early in the season; we’re not going to see many teams as strong as them throughout the year.”

“They are a tough team to play against,” said Stitz. “It was a very good game for us to have, especially this early in the season because they are big and strong, and they play to their strengths. They play direct. Guys are running all over the field playing hard and the way to compound that is to be able to keep the ball and move it around. We didn’t do that very well today. Part of that is on us and part of that is credit to them for not allowing us.”