No. 3 Broadneck turns back Severna Park 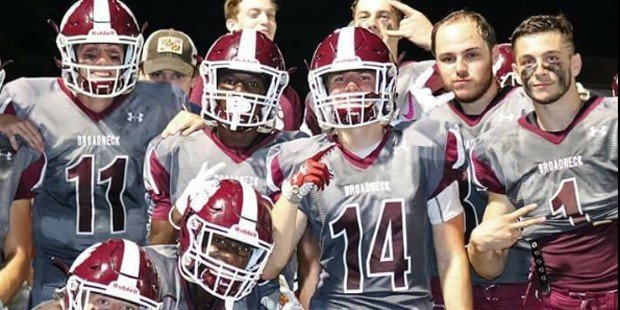 Host Falcons battle back, but the Bruins pull away late

Ehrlich completed 17-of-32 passes for 206 yards and two TD’s in the Bruins quick/short passing scheme as they stayed unbeaten at 3-0, while the much improved Falcons, who were 1-9 in 2017, fell to 1-2 with their second straight loss.

Ehrlich, the son of former Maryland governor Bob Ehrlich and brother Drew Ehrlich, who was a standout football, basketball and baseball player at Gilman School, started the scoring with a dive from the one-yard line to give the Bruins a 7-0 lead on their first possession – a 67-yard drive in eight plays.

With 4:22 left in the first period, Ehrlich hooked up with Williams on a 7-yard scoring pass and Keegan Bragaw’s kick made it 14-0. The lead went to 20-zip on a 1-yard smash by Carlos Coates with just under 10 minutes to the half. Severna Park got on the board on the ensuing possession on a 30-yard field goal by Travis Victorio.

Broadneck answered right back on an Ehrlich 10-yard toss to Andre Woods making it 27-3 just before the break.

The Falcons put up the only score in the third period on a Jordan Hallet to Ryan Thorpe 18-yard TD pass, cutting the lead to 27-10. At the start of the final quarter, the Falcons were about to make it a game, as Demetrius Powell scampered 20 yards to pay-dirt and suddenly it was 27-17 Bruins.

Severna Park’s hopes were dashed on the ensuing kickoff as Williams, who had 9 receptions for 142 yards on the night, gathered in the pigskin and turned in a dazzling 99-yard kickoff return to close the scoring.

A couple bright spots for the Falcons were sacks by lineman Elijah Hill and linebacker Tristan Halloran.