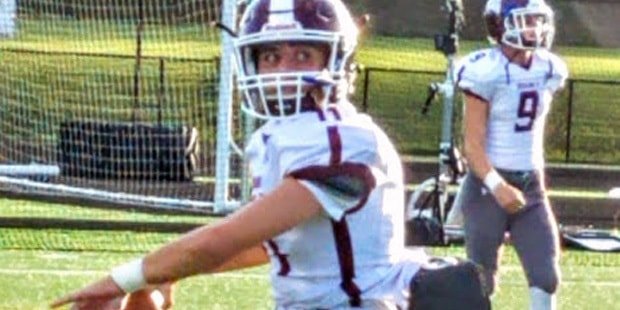 Looking to complete an undefeated regular season, No. 2 Broadneck started quickly on the road Friday night at Annapolis and cruised to a 10-0 mark with a 48-6 win over the Panthers.

Freshman quarterback Josh Ehrlich threw three first quarter touchdown passes and five for the game to lead the Bruins to a 21-6 lead after the initial period.

Ehrlich’s first scoring throw went for 29 yards to Ethon Williams, but Annapolis pulled within one, at 7-6, when Deon Hunt scored on a 17-yard run.

Later in the first, Ehrlich made a pair of TD throws Tnaejah Watts, from 23 and 30 yards, before going back Williams for a 33-yard scoring strike in the second quarter. He connected with Williams for a third time, early in the fourth quarter with a 24-yard touchdown throw.

Jason Carcamo also rushed for a Broadneck touchdown and Brendan Kennedy recovered a fumble in the end zone for the Bruins’ final score.

Ehrlich was 13-for-21 for 244 yards, while Williams had five catches for 108 yards. Carlos Coates led the Broadneck defense with five solo tackles.