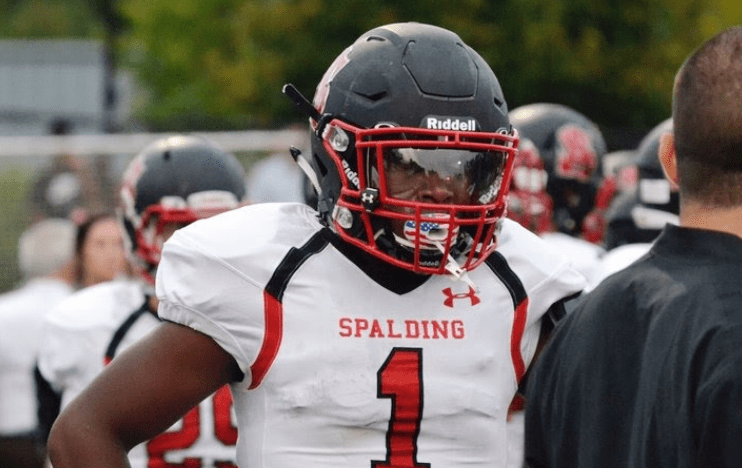 Chestnut scores four touchdowns in the opening half to pace rout

Playing its season opener at home, against a Top 10 opponent from Anne Arundel County, the 2nd-ranked Archbishop Spalding football had all kinds of motivation for its match-up with No. 9 Annapolis, Friday night on Riva Road, and the Cavaliers unleashed that desire in an impressive, 56-14 rout of the Panthers.

New Spalding quarterback Jayden Umbarger, replacing VSN Offensive Player of the Year Evan Fochtman, now a reserve QB at Navy, had some highs and lows in his first quarter of action, but eventually had the offense clicking on all cylinders before giving way to freshman Austin Tutas in the second half, once the rout was on.

Umbarger opened with a 32-yard touchdown pass to Jamari Jones and Julius Chestnut followed with a 2-yard TD run to push Cavaliers in front 14-0. Later in the quarter, Annapolis’ Delvin Johnson intercepted Umbarger and returned the ball 52-yards for a Panther touchdown. Unfortunately for Annapolis, it would not score gain until the final five minutes of the contest, after Spalding had established a 49-6 lead and had the running clock rolling.

Umbarger atoned for his miscue by scoring on a 52-yard run of his own, late in the opening quarter, and Chestnut would rush for three second quarter scores as Spalding built a 42-6 halftime lead. Chestnut carried the ball just 10 times in the contest and rushed for 96 yards and four scores. Umbarger gained 72 yards in six running attempts. He only attempted four passes, completing two for 55 yards.

Tutas went 9-for-13 for 151 yards during his time behind center, completing a 49-yard TD toss to Brevin Easton.

T-Nae’Jah Watts scored the second touchdown of the night for Annapolis on a 23-yard throw from quarterback Ahmon Middleton. Spalding reserve capped the scoring with a 60-yard touchdown run, late in the fourth quarter.

Both teams have to move on quickly, as Spalding hosts Florida power Bishop Moore next week and Annapolis meets Anne Arundel County rival No. 7 Old Mill, which is coming off a 42-0 loss at the hands of North Point. Thus, the Annapolis/Old Mill battle may already be a do or die battle for a spot in the state playoffs.

Picture above: Spalding’s Julius Chestnut, who rushed for four touchdowns in the game.