No. 2 Spalding survives a strong challenge from No. 17 Hereford 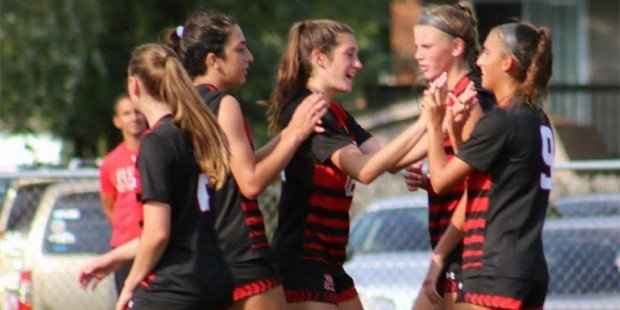 The Hereford girls soccer team has struggled a bit more than some expected early this fall, but the 17th-ranked Bulls traveled to undefeated and second-ranked Archbishop Spalding, on Tuesday, looking to make a statement.

The statement was heard, as Hereford (2-3-1) gave the Cavaliers all they could handle, but when the dust settled the host Cavs survived with a hard-fought 3-2 victory, as freshman Sophie Thibeault broke a 2-2 second half tie with the game-winning goal, with just less than eight minutes to play in the game.

Thibeault has quickly become a force for the Cavaliers (5-0), scoring four goals already this season.

Early on it looked as if Spalding might run away with the contest as Zandy Gardner scored the day’s first goal less than a minute into the action and the Cavs put heavy pressure on the Hereford defense and the lead doubled to 2-0 midway through the half when Ashley Tutas scored.

Hereford, however, caught a spark when Carly Stevens headed home her team’s first goal and, suddenly, Hereford began to assert itself in the Spalding half, nearly earning the equalizer before the halftime intermission.

The Bulls kept charging in the second half and finally tied the contest on a goal from Bree Gobell in the 55th minute.

Spalding remained poised and slowly turned the tide back in its favor, creating the chances it needed to eventually break through for the game winner.

Both goalkeepers were strong for their side, with Hereford’s Lucy Griffin producing nine saves and Spalding’s Emma Murray three.

Both teams move on to tough matches on Friday as Hereford goes home to host No. 20 Eastern Tech and Spalding will entertain No. 6 Mercy on Thursday.