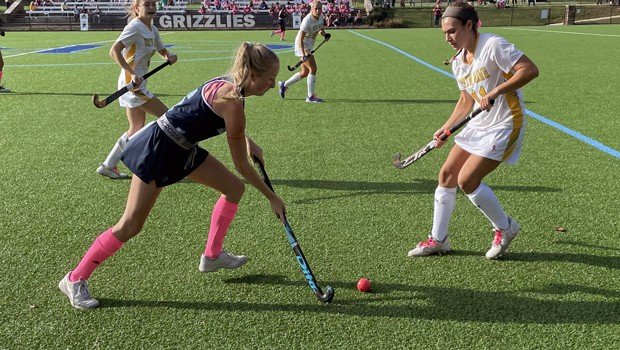 Garrison Forest’s No. 2 field hockey team continued its charge through the IAAM A Conference Thursday afternoon, scoring three goals in the first 12 minutes to jump start a 5-1 victory over No. 3 Bryn Mawr in the Grizzlies’ annual Play4TheCure game.

The defending champion Grizzlies (9-4) remain the only team unbeaten in the A Conference at 6-0 as the Mawrtians suffered their first loss of the season. The Grizzlies have outscored their A Conference rivals, 29-4, and have now beaten every one with a winning record.

“I like when we really come out and kind of smother a team,” Garrison Forest coach Malcolm Belin said, “really smother them and keep them in their half of the field or their back quarter and we managed to do that pretty much this game. We really put the pressure on them throughout.”

Ella Kokinis led the Grizzlies with three goals and was named VSN’s first Ryleigh’s Oyster Bold Performer of the Week, which will be awarded each week to a Baltimore County athlete in a game covered by VSN.

The junior forward sparked the hot start with a goal off a pass from Riley Schmidt a minute and a half into the game. About five minutes later, Sophie McAvoy scored on a reverse chip that deflected off a defender’s stick and sailed over the head of Mawrtians goalie Anne de Jesus, who had not allowed a goal all season.

Lauren Widdowson made it 3-0 with 3:41 left in the first quarter when she drove a ball from Morgan Qualls off de Jesus’s pads and into the goal.

“It was really great to get the momentum going,” Kokinis said. “I think we did a great job connecting our passes and finding open space in the circle and being able to finish which was one of our main focuses of the week.”

The Mawrtians (11-1, 5-1) had given up just one goal all season, but the Grizzlies so dominated the first quarter that the visitors didn’t cross midfield for the first nine minutes. They didn’t manage a shot until midway through the second quarter and took just three shots during the game. Grizzlies goalie Alyssa Klebasko saved the first two, but Martha Knaub tipped in a pass from Hanna Franklin to cut the lead to 3-1 with 4:43 left in the first half.

The game proved to be one of adjustments for the Mawrtians, playing for the first time without stellar center midfielder Ava Mickel, a Yale commit who tore an ACL in Tuesday’s win over Notre Dame Prep and is sidelined for the season.

Mickel had contributed 10 goals and five assists this season, but she was critical to so much more on both ends of the field.

“Ava’s a leader on and off the field,” Bryn Mawr coach Jeanette Budzik said. “She’s got incredible vision. She really works well with Shayna (Brodman) and Izzy (Rothwell). It’s a really strong combination and they feed off of each other, not just on skill work but adrenaline and carrying the team… I don’t want to make any excuses, because Garrison is very strong, but it can’t be said that missing Ava didn’t have a big effect on the kids today. We have to figure out how to play and work with people in different positions.”

There was no IAAM season last year and the Mawrtians played in the B Conference in 2019. Their schedule this fall has them playing the top A Conference teams in the final few weeks of the season, so Garrison was the toughest team they had played in a while.

In the second half, some of their adjustments started to click and de Jesus, who finished with 12 saves, held off the Grizzlies in the second quarter, but Kokinis scored an unassisted goal in each of the final two quarters.

“I think we’re going to learn from this and have a lot of improvement,” Budzik said, “but Garrison is strong and they played well.”

The Grizzlies, of course, also aim to get better with each game. Their tough early schedule — including losses to No. 1 Severna Park, 2-1 in the double-overtime season opener, and to three top teams from Pennsylvania and New Jersey at last month’s MAX Field Hockey National Invitational — has helped strengthen them for a playoff run.

“It’s a process,” Belin said. “Some people think you’re supposed to start Sept. 1 and be the team you’re supposed to be by playoffs and that’s just not the case with any team. It’s day by day, step by step. You can see the improvements individually and as a team as we keep marching through the season… We have some work to do, but we have a couple weeks to do it. I like where we’re at.”

RELATED: THE SAVE OF HER LIFE

Both teams showed their support for Play4TheCure, the National Foundation for Cancer Research’s fundraising effort to support all cancers. The Grizzlies wore pink shin guards and the Mawrtians wore pink hair ribbons and shoe laces for Breast Cancer Awareness month.

The Grizzlies also had orange ribbons drawn on their arms for Leukemia Awareness to recognize Klebasko, a leukemia survivor who was diagnosed at 6 years old but has been cancer free for the past seven years. Along with flowers, the junior goalie was presented with Halloween Oreo cookies which are, of course, orange in the middle.

Pictured above: Garrison Forest junior Lauren Widdowson, who scored one of the Grizzlies five goals, works against the defense of Bryn Mawr senior Shayna Brodman.