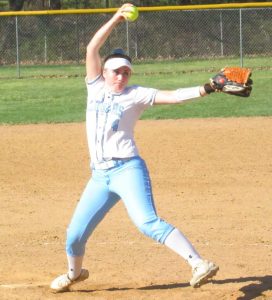 Haley Downin was again dominant for Chesapeake-Anne Arundel softball Thursday. The senior tossed a two-hitter as the No. 2 Cougars defeated 11th-ranked Glen Burnie in a key Anne Arundel County match.

In an a pivotal Anne Arundel County softball game advanced forward one day, to beat Friday’s potential rain storms, No. 2 Chesapeake-AA remained red hot, defeating No. 11 Glen Burnie, 6-0, to break a first-place tie with the Gophers and take sole possession of the top spot in the Anne Arundel standings.

The win was the ninth straight for the Cougars (12-1 overall and Anne Arundel) and they now own an one-game lead on Glen Burnie (12-2, 11-2) and a 1-1/2 game bulge on Severna Park in the chase for the regular season league title.

Haley Downin threw the shutout for Chesapeake, delivering a two-hitter and 13 strikeouts.

The game was scoreless through four innings, but the Cougars jumped on top with four runs in the fifth Tristyn Stewart produced an RBI double and Allison Pollack smacked a three-run home run. Jerzie Nutile added a two-run home run in the top of the seventh to finish the scoring.

Glen Burnie had singles by Jordan Fangman and Giavani Dickey, but not much else in the way of offensive production. The loss snapped an 11-game winning streak by the Gophers. It was also the first time Glen Burnie has been shutout this season.