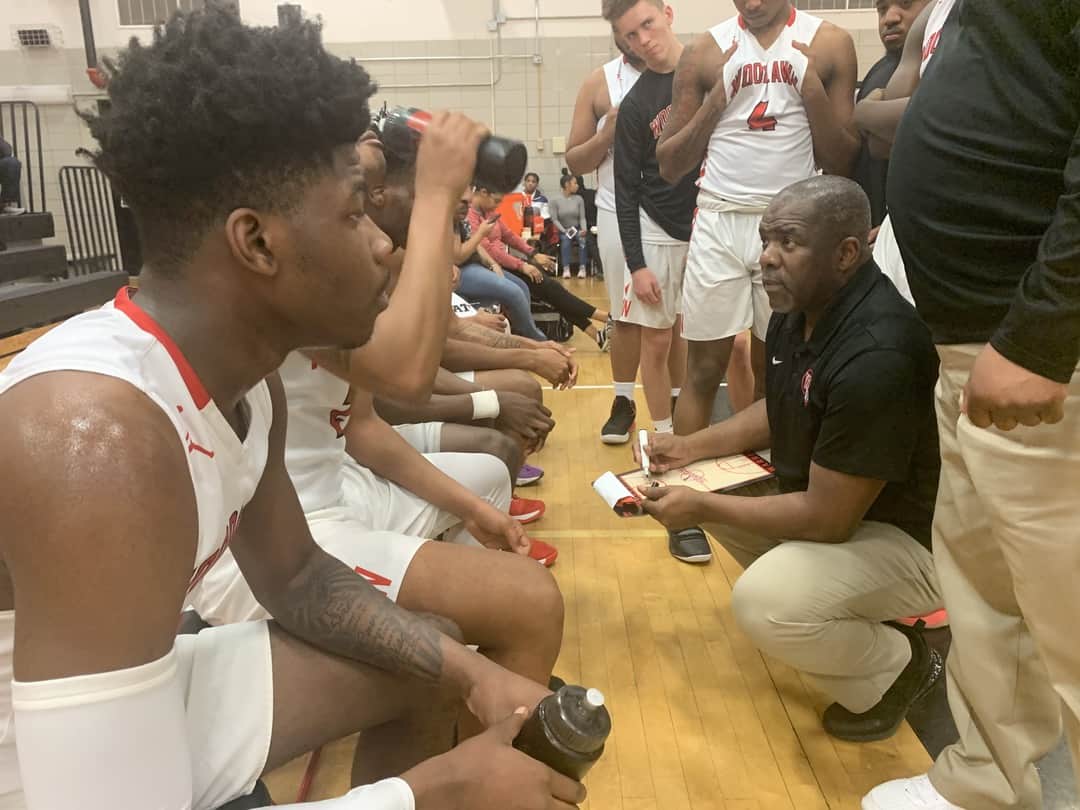 Woodlawn coach Bobby Richardson (kneeling) talks to his team during timeout last week. The No. 17 Warriors continued their late season surge Wednesday, rallying for a 75-70 victory at 11th-ranked Dulaney for an 11th straight victory.

Adversity seems to bring the best out of Woodlawn High’s boys basketball team. The No. 17 Warriors defeated 11th-ranked Dulaney, 75-70, in a Baltimore County contest in Timonium Wednesday evening.

Trailing 36-26 at halftime, the Warriors forged ahead in the final moments to win its 11th straight game. Monday, Woodlawn knocked off No. 16 Glenelg Country School in overtime in a non-league contest in Ellicott City.

“It isn’t easy, but it sure is fun,” said Woodlawn coach Bobby Richardson. “The work is hard and humbling.”

The Warriors, who lost veteran starter Khiran Thompson for academic reasons, got the lead for good on Rice’s 3-pointer late in regulation. Rice finished with 12 points, while senior Kameron Downs netted 11 points.

Jaylin Webster had 19 points and four assists for Dulaney (14-5), which didn’t have junior star guard Ryan Conway, who suffered a foot injury during pregame. The Lions also lost Ethan Anderson to an ankle injury in the first half.

Cam Byers added 18 points and four assists for the Lions, who honored its senior class before the game. Dulaney completes its regular season at Patapsco Friday and Perry Hall Wednesday.

The Warriors, who have clinched a spot in the Feb. 25 Baltimore County final at SECU Arena, plays at Kenwood Friday.