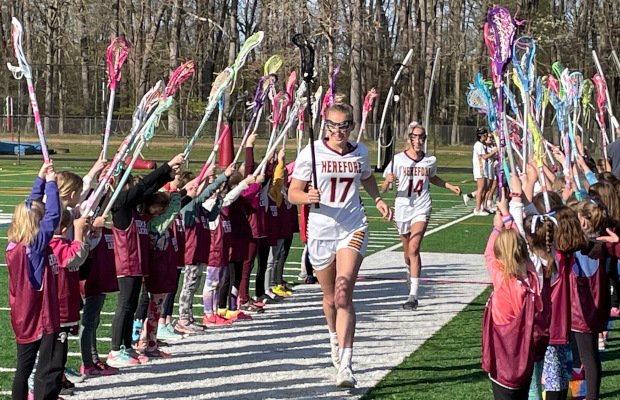 Defense gives the Bulls an edge in Baltimore County showdown

In a close game between the No. 16 Hereford and the No. 18 Towson girls lacrosse teams, Thursday night, it seemed appropriate that the final minute would be all about defense. 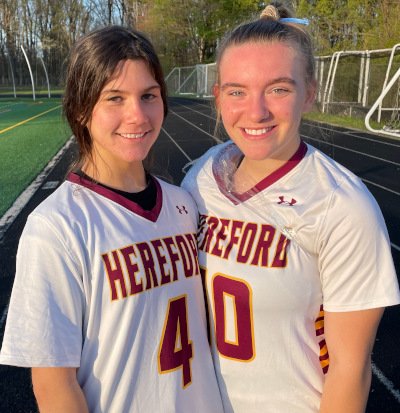 Hereford goalie MK McGonigle (4) and defender Hope Barber (10) led a defense that shut out Towson for almost 19 minutes at the start of Thursday’s game as the Bulls went on to win 9-7 and take over first place in Baltimore County’s A Division.

Hereford goalie MK McGonigle made two saves in that last minute to seal a 9-7 victory for the host Bulls, who remain the only undefeated team in Baltimore County’s A Division.

The Generals (8-2, 4-1) then staged a rally. Mary Claire Heubeck won the next two draws leading to goals from Brigid Vaikness and Jillian McNulty, cutting the Bulls’ lead to 9-7 with 1:43 left, plenty of time to score twice and tie the game.

McGonigle made sure that didn’t happen.

The junior goalie made a nice stop against Vaikness and then saved Lilywynn Holman’s free-position shot with 44 seconds left.

“I was thinking whether or not our defense was going to be there,” McGonigle said. “They always are, but it’s always in the back of my mind and then once it released on the stick, I just knew what I had to do to get there — step up, step to, get the ball.”

Hereford coach Kelly Swift said McGonigle is easily growing into her role in her first season on varsity.

“MK has done so amazing this season,” Swift said. “She was on JV last year, came up this year and has worked so hard and done everything we’ve asked of her. We keep saying we have to be great in May and things are starting to click with her. This is when we need it.”

Thursday night’s game was uncharacteristically sloppy for both teams. The Generals turned the ball over 13 times and six turnovers led to Hereford goals. The Bulls had 10 turnovers but none led to a Towson goal and most of them came early in the game.

“I think the key to this game was realizing what we could fix in the moment,” said senior defender Hope Barber. “I think we did a really good job realizing our communication on defense was not doing well. We talked about it and we fixed it right away. We started working together as a team and that made a tremendous effort in transition and helped us get the ball from defense to offense.”

Barber, Maddie Magliocca, Lily Walton and Caitlin Meeker, along with McGonigle, led a defense that kept the Generals to their lowest offensive output of the season.

They held the Generals without a goal for almost 19 minutes at the start of the game as the Bulls jumped out to a 3-0 lead. Jordan Peterson had two goals in the run and Lindsey Moneymaker had one as the duo combined for six goals in the game.

Towson rallied with two goals from Gabi Galvez to cut the lead to 3-2 at the half and the sophomore attacker tied it at 3 to open the second half.

Moneymaker then scored twice to boost the Bulls’ lead to 5-3 with 18:35 to go. The teams traded goals until the Bulls strung together three in a row. Peterson’s low shot on a free position gave the Bulls a 7-5 lead with 10:39 left.

Cam Kauffman then scored the game winner, an extra-man goal, on a tough angle shot from the right side of the cage. The freshman took a pass from Bailey Berquist behind the cage and slipped it inside the near post for a three-goal lead. That re-energized the Bulls and a little over a minute later, after Barber won the draw, Katie Burks scored on a pass from Kennedy Ziegler to give the Bulls a 9-5 lead with 3:16 left.

“That was huge,” Swift said of getting the four-goal lead. “[The Generals] are coached well, they’re a very good team, they are aggressive and we’re lucky to come out with a win today.”

Towson coach Taylor Carhart said she was pleased with the late rally, but she wasn’t happy about the turnovers, many of which were unforced. Still, she said, those are easy to fix.

“We beat ourselves this game,” said Carhart, whose team will face the Bulls again in the Baltimore County championship and could see them in the regional playoffs as well.

“Hereford is a very good team and I’m not going to take that away from them, but if we make a few adjustments, come more prepared, come more focused and get ready to win… It’s harder to beat a team twice.”

Pictured above: Hereford midfielders Jordan Peterson (17) and Cam Kauffman (14) run between Baby Bulls players from the Hereford Rec. Council before they took on Towson Thursday night. Peterson scored three times and Kauffman netted the game winner in a 9-7 victory while the Baby Bulls played an exhibition game at halftime.